Dioon edule, the chestnut dioon, is a cycad native to Mexico, also known as palma de la virgen. Cycads are among the oldest seed plants and even pre-date the dinosaurs.[2] It belongs to the Zamiaceae plant family within the order Cycadales. The genus name "Dioon" means "two-egged", referring to the two ovules (see photo below).

Two subspecies are known, the nominate subspecies growing in a moister environment than the other:

Dioon edule is easily distinguished from other Dioon species because it lacks spines on the borders of leaflets. Spines are present on juvenile leaves but are lost when the plant matures. D. edule has a crown of pinnate (i.e. feathered) leaves which measure around 135 cm long. Lateral budding is present and mucilage, or sap, is excreted from any cut surfaces on the plant body. The plant has a large central medulla and a single vascular bundle containing the xylem, phloem and cambium. Since the organism is slow-growing and xerophilous (i.e. drought-tolerant), only a small conduction channel is needed, unlike other plants. Stomata are also present to aid in transpiration and assimilation and are associated with sporophylls. D. edule has three or four large adventitious (i.e. abnormally positioned) roots surrounded by many smaller ones which harbor small nodules containing tannins. Roots are composed of large amounts of corky secondary tissue consisting of phellogen. It is often very difficult distinguish males and females until they develop a cone. Cones generally do not show a visual difference; however, cone intervals can be used to determine the sex of the plant. Females usually have a much longer cone interval than males, typically 10–52 years as compared to 2.8–8.8 years.

Dioon edule is endemic to the eastern coast of Mexico. It is commonly found distributed throughout the Sierra Madre Oriental from Veracruz to the Nuevo Leon. It commonly resides in tropical deciduous thorn forests and oak woodlands. They are usually found at an altitude of 500–1000 feet in harsh areas including exposed, shallow soils. Most of the areas in which D. edule resides are subjected to very dry climates and frequent brush fires which impact their survival and distribution.

Disturbances alter the population dynamics of Dioon edule populations. If a population is heavily dominated by adult plants, the disturbance will be minimal as compared to the population consisting of younger plants. This is due to their ability to survive harsh conditions. D. edule exemplifies a Type III survivorship curve and clumped distributions. It is found mostly on shallow, rocky soils due to competition with other, faster growing species for water, nutrients and seed dispersal. In response, they have developed a selective advantage for growing in these harsh climates including vigorous tap roots for anchorage and water conduction. Furthermore, it is harder for rodents to reach the plant and seeds if they are established in difficult locations to reach. In addition to competition, causal agents of D. edule's random, clumped distribution include predation, variations in temperature and precipitation, and measures of seed dispersal.

Death rates among seedlings are considerable, which is detrimental to a slow-growing plant such as the Dioon edule. Seeds must combat harsh, dry climates and frequent bushfires. Most mature plants are heavily armored and able to withstand these fires. Smaller seeds and juvenile plants are not so fortunate. However, the release of nutrients and minerals encourages females to develop cones during the following season. In addition to climate, seeds must also avert rodent predators. This is reasonably unusual because cycad seeds and foliage are poisonous to most mammals, excluding these varied species of rodents. Young leaves of D. edule are also eaten by the Eumaeus debora butterfly larvae.

One of the ways in which cycads are identified includes leaflet characteristics, which were not heavily studied when cycads were first identified. In subsequent studies it was found that leaflet width was related to geographic dispersal. Wider leaves typical of Dioon edule subsp. edule are found in the south whereas the narrower leaves of D. edule subsp. angustifolium are found to the north. Evidence suggests D. edule subsp. edule was much more widespread than it is today and became fragmented thus allowing for genetic isolation. It is also speculated that the narrower leaves are endemic in the northern subspecies due to less temperate and humid environmental conditions in these areas.

In addition, endomycorrhizae are present in roots and allow for increased absorption of nutrients and water. Symbiotic blue-green algae are also found in the coralloid (i.e. upward growing) roots. They assist the plant by fixing nitrogen thus giving the plant essential nutrients in exchange for protection. Cycads in general have significant roles in the nitrogen budget of their respective ecosystems.

Both subspecies of Dioon edule are on the verge of becoming endangered. They are threatened by human-caused habitat destruction and collection for horticultural and medicinal purposes. Bouncing back from these disturbances is extremely difficult for slow-growing plants such as D. edule. The United States Botanical Garden suggests that plant material should be conserved, seed banks should be established and legislation regarding trading cycads and protection of their habitats should be implemented and enforced.[2]

Dioon edule var. edule is commonly called the chestnut dioon and is endemic to the eastern coast of Mexico. D. edule was originally described by John Lindley in 1843. There are currently two subspecies known: D. edule subsp. edule and D. edule subsp. angustifolium. 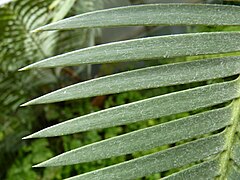 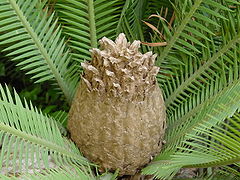 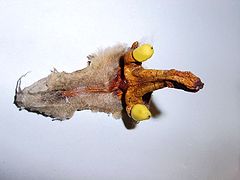