Kunaev, the son of a Kazakh clerk, was born at Verny, now Almaty, and grew up in a middle-income family. He graduated from the Institute of Non-Ferrous and Fine Metallurgy in Moscow in 1936, which enabled him to become a machine operator. By 1939 he had become engineer-in-chief of the Pribalkhashatroi mine, and joined the Communist Party of the Soviet Union (CPSU), a condition of the position.[1]

As First Secretary, Kunaev was an ardent supporter of the Virgin Lands campaign, which opened millions of hectares of lands in central Kazakhstan to agricultural development and caused a large influx of Russian immigrants into Kazakhstan. However, in 1962 he was dismissed from his position as he disagreed with Khrushchev's plans to incorporate some lands in Southern Kazakhstan into Uzbekistan. Ismail Yusupov, a supporter of the plan, replaced Kunaev.

After his dismissal as First Secretary, he was Chairman of the Council of Ministers of the Kazakh SSR until 1964, when he became first secretary of the Central Committee of the Communist Party of Kazakhstan again in 1964 when Khrushchev was ousted and replaced by Brezhnev.[5] He kept his position for twenty-two more years.[6] He was an alternate member of the Politburo from 1967, and a full member from 1971 to 1987. 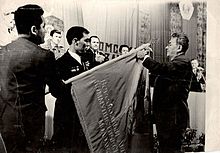 During Kunaev's long rule, Kazakhs occupied prominent positions in the bureaucracy, economy and educational institutions. In 1984, Kunaev made Nursultan Nazarbayev the Chairman of the Council of Ministers. However, at the sixteenth session of the Communist Party of Kazakhstan in January 1986, Nazarbayev criticized Askar Kunayev, President of the Academy of Sciences for not reforming his department.[7] Dinmukhamed Kunayev, Nazarbayev's boss and Askar's brother, felt deeply angered and betrayed. Kunayev went to Moscow and demanded Nazarbayev's dismissal while Nazarbayev's supporters campaigned for Kunayev's dismissal and Nazarbayev's promotion.[8][9]

However, this did not go well for Kunaev, who saw his brother dismissed as President of the Academy of Sciences (and succeeded by Murat Aitkhozhin), as well as seeing Nazarbaev keep his position as Chairman of the Council of Ministers. Soon D. A. Kunaev himself was dismissed, as he was removed from office under pressure from Mikhail Gorbachev, who accused him of corruption.[6][10][7] On 16 December 1986 the Politburo replaced him with Gennady Kolbin, who had never lived in the Kazakh SSR before. The decision set off three days of street rioting in Almaty, between 16 and 18 December, 1986 - which were the first signs of ethnic strife during Gorbachev's tenure.[11][12] In modern Kazakhstan, this revolt is called Jeltoqsan (meaning December in Kazakh).

After the resignation, he lived in his hometown of Alma-Ata. He died in the evening of August 22, 1993 in the village of Akshi, Alakol district of Almaty region as a result of a heart attack. He was buried on August 25, 1993 at the Kensai cemetery in the city of Alma-Ata.

Under D. A. Kunaev, a significant economic upswing in Kazakh SSR was achieved, the industrial potential of the republic increased significantly (mainly due to the mining, raw materials industries and the energy sector serving them) and agriculture (the annual famous “billion pounds” of grain was produced many times). In his book "From Stalin to Gorbachev" (1994), Kunaev himself referred to the data of the USSR State Statistics Committee, and he describes in detail his contribution to the development of living standards and the rise of the economy of the Kazakh SSR. By the end of Kunaev's time in power, compared with 1955, the economic potential of the Kazakh SSR increased by seven times, the standard of living, industry, production rose to a historic maximum, and the Kazakh SSR became the third largest economy in the Soviet Union (after the Russian SFSR and Ukrainian SSR). For great services to the development of the economy and the standard of living in the country, he was very popular among the Kazakh people and many still call the Kunaev era as the "Golden Age of Kazakhstan" to this day.

The Kazakhstan leader’s name was associated with corruption and economic problems for which national newspapers criticized the republic. The Communist Party of Kazakhstan, which Kunaev headed for 22 years, criticised him for "establishing a personality cult, distorting personnel policy, manifestations of an 'anything goes' mentality." The violations "led to the development . . . of protectionism, abuse of office, bribe-taking, corruption, nationalist and other negative phenomena." 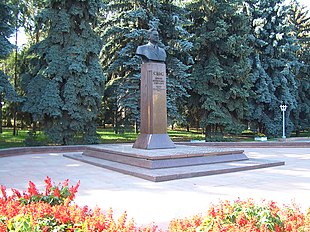 Kunaev spent the last years of his life in charitable activity, establishing the 'Dinmukhamed Kunaev Foundation', one of whose purposes was the support of political reform in Kazakhstan.[13]