The Dinaric Alps extend for approximately 645 kilometres (401 mi) along the Western Balkan Peninsula from the Julian Alps to the northwest in Italy, downwards to the Šar and Korab massif, where their direction changes. The Albanian Alps, or Prokletije, is the highest section of the entire Dinaric Alps; this section stretches from Albania to Kosovo and eastern Montenegro. Maja Jezercë is the highest peak and is located in Albania, standing at 2,694 metres (8,839 ft) above the Adriatic.

The Dinaric Alps are one of the most rugged and extensive mountainous areas of Europe, alongside the Caucasus Mountains, Alps, Pyrenees, Carpathian Mountains and Scandinavian Mountains.[citation needed] They are formed largely of Mesozoic and Cenozoic sedimentary rocks of dolomite, limestone, sandstone and conglomerates formed by seas and lakes that once covered the area. During the Alpine earth movements that occurred 50–100 million years ago, immense lateral pressures folded and overthrust the rocks in a great arc around the old rigid block of the northeast. The main tectonic phase of the orogenesis in the area of the Dinaric Karst took place in Cenozoic Era (Paleogene) as a result of the Adriatic microplate (Adria) collision with Europe, and the process is still active.[4] The Dinaric Alps were thrown up in more or less parallel ranges, stretching like necklaces from the Julian Alps as far as northern Albania and Kosovo, where the mountainous terrain subsides to make way for the waters of the Drin River and the plains of Kosovo.

The Dinarides are named after Mount Dinara (1,831 m), a prominent peak in the center of the mountain range on the border with the Dalmatian part of Croatia and Bosnia and Herzegovina.[5] The chain is called Alpet Dinaride or Alpet Dinarike in Albanian, Dinaridi/Динариди in Serbo-Croatian, Dinarsko gorstvo in Slovene and Alpi Dinariche in Italian. 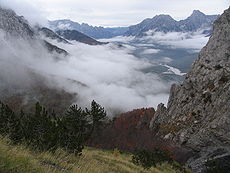 The Dinaric Karst region is built mostly of Mesozoic limestone and dolomite deposited on top of a huge Bahama-type carbonate platform,[6] while a few kilometers thick carbonate successions have been deformed during the Alpine orogenesis.[7] The main tectonic phase of the Alpine orogenesis in the Dinaric Karst region took place in Cenozoic Era (Paleogene) as a result of the Adriatic microplate (Adria) collision with Europe, and the process is still active.[8] The Mesozoic limestone forms a very distinctive region of the Balkans, notable for features such as the Karst Plateau, which has given its name to all such terrains of limestone eroded by groundwater. The Dinarides are known for being composed of karst – limestone rocks – as is Dinara, the mountain for which they were named.[5] The Quaternary ice ages had relatively little direct geologic influence on the Balkans. No permanent ice caps existed, and there is little evidence of extensive glaciation. Only the highest summits of Durmitor, Orjen and Prenj have glacial valleys and moraines as low as 600 m (1,969 ft). However, in the Prokletije, a range on the northern Albanian border that runs east to west (thus breaking the general geographic trend of the Dinaric system), there is evidence of major glaciation. One geological feature of great importance to the present-day landscape of the Dinarides must be considered in more detail: that of the limestone mountains, often with their attendant faulting. They are hard and slow to erode, and often persist as steep jagged escarpments, through which steep-sided gorges and canyons are cleft by the rivers draining the higher slopes.[citation needed]
The partially submerged western Dinaric Alps form the numerous islands and harbors along the Croatian coast.

The surroundings of Foča. Bosnia and Herzegovina

The most extensive example of limestone mountains in Europe are those of the Karst of the Dinaric Alps. Here, all the characteristic features are encountered again and again as one travels through this wild and underpopulated country. Limestone is a very porous rock, yet very hard and resistant to erosion. Water is the most important corrosive force, dissolving the limestone by chemical action of its natural acidity. As it percolates down through cracks in the limestone it opens up fissures and channels, often of considerable depth, so that whole systems of underground drainage develop. During subsequent millennia these work deeper, leaving in their wake enormous waterless caverns, sinkholes and grottoes and forming underground labyrinths of channels and shafts. The roofs of some of these caverns may eventually fall in, to produce great perpendicular-sided gorges, exposing the surface to the water once more.

The Dinaric rivers carved many canyons characteristic for Dinaric Alps, and in particular karst. Among the largest and most well known are the Neretva, the Rakitnica, the Prača (river), the Drina, the Sutjeska, the Vrbas, the Ugar, the Piva, the Tara, the Komarnica, the Morača, the Cem/Ciijevna, the Lim, and the Drin.

Only along the Dinaric gorges is communication possible across the Karst, and roads and railways tunnel through precipitous cliffs and traverse narrow ledges above roaring torrents. A number of springs and rivers rise in the Dinaric range, including Jadro Spring noted for having been the source of water for Diocletian's Palace at Split.[9] At the same time, the purity of these rocks is such that the rivers are crystal clear, and there is little soil-making residue. Water quality testing of the Jadro River, for example, indicates the low pollutant levels present.[10] Rock faces are often bare of vegetation and glaring white, but what little soil there is may collect in the hollows and support lush lime-tolerant vegetation, or yield narrow strips of cultivation.[citation needed]

Ruins of fortresses dot the mountainous landscape, evidence of centuries of war and the refuge the Dinaric Alps have provided to various armed forces. During the Roman period, the Dinarides provided shelter to the Illyrians resisting Roman conquest of the Balkans, which began with the conquest of the eastern Adriatic coast in the 3rd century BC. Rome conquered the whole of Illyria in 168 BC, but these mountains sheltered Illyrian resistance forces for many years until the area's complete subjugation by 14 AD. More recently, the Ottoman Empire failed to fully subjugate the mountainous areas of Montenegro. In the 20th century, too, the mountains provided favourable terrain for guerrilla warfare, with Yugoslav Partisans organising one of the most successful Allied resistance movements of World War II.[citation needed]

The area remains underpopulated, and forestry and mining remain the chief economic activities in the Dinaric Alps. The people of the Dinaric Alps are on record as being the tallest in the world, with an average adolescent height of 185.6 cm (6 ft 1.1 in).[11] The people of Bosnia and Herzegovina have the highest recorded average of any single country, with 183.9 cm average for men and 172.72 cm for women.[12][13][14]

The main mountain passes of the Dinaric Alps are:[15] 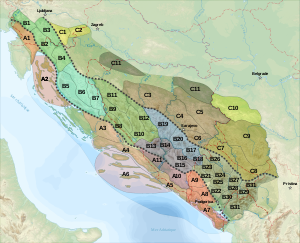 The mountains and plateaus within the Dinarides are found in the following regions:

Further information: List of mountains in Bosnia and Herzegovina