Placard outside a shop in Bordeaux advertising subtraction of 20% from the price of the second perfume purchased.

Subtraction is an arithmetic operation that represents the operation of removing objects from a collection. The result of a subtraction is called a difference. Subtraction is signified by the minus sign, −. For example, in the adjacent picture, there are 5 − 2 apples—meaning 5 apples with 2 taken away, resulting in a total of 3 apples. Therefore, the difference of 5 and 2 is 3, that is, 5 − 2 = 3. While primarily associated with natural numbers in arithmetic, subtraction can also represent removing or decreasing physical and abstract quantities using different kinds of objects including negative numbers, fractions, irrational numbers, vectors, decimals, functions, and matrices.[1][2]

Subtraction follows several important patterns. It is anticommutative, meaning that changing the order changes the sign of the answer. It is also not associative, meaning that when one subtracts more than two numbers, the order in which subtraction is performed matters. Because 0 is the additive identity, subtraction of it does not change a number. Subtraction also obeys predictable rules concerning related operations, such as addition and multiplication. All of these rules can be proven, starting with the subtraction of integers and generalizing up through the real numbers and beyond. General binary operations that follow these patterns are studied in abstract algebra.

Performing subtraction on natural numbers is one of the simplest numerical tasks. Subtraction of very small numbers is accessible to young children. In primary education for instance, students are taught to subtract numbers in the decimal system, starting with single digits and progressively tackling more difficult problems.

In advanced algebra and in computer algebra, an expression involving subtraction like A − B is generally treated as a shorthand notation for the addition A + (−B). Thus, A − B contains two terms, namely A and −B. This allows an easier use of associativity and commutativity. 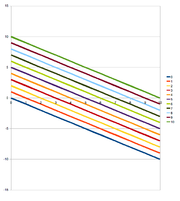 Subtraction is usually written using the minus sign "−" between the terms;[3] that is, in infix notation. The result is expressed with an equals sign. For example,

(pronounced as "two minus one equals one")

There are also situations where subtraction is "understood", even though no symbol appears:

Formally, the number being subtracted is known as the subtrahend,[4][5] while the number it is subtracted from is the minuend.[4][5] The result is the difference.[4][5][2][6]

All of this terminology derives from Latin. "Subtraction" is an English word derived from the Latin verb subtrahere, which in turn is a compound of sub "from under" and trahere "to pull". Thus, to subtract is to draw from below, or to take away.[7] Using the gerundive suffix -nd results in "subtrahend", "thing to be subtracted".[a] Likewise, from minuere "to reduce or diminish", one gets "minuend", which means "thing to be diminished".

Of integers and real numbers

From c, it takes b steps to the left to get back to a. This movement to the left is modeled by subtraction:

Subtraction of natural numbers is not closed: the difference is not a natural number unless the minuend is greater than or equal to the subtrahend. For example, 26 cannot be subtracted from 11 to give a natural number. Such a case uses one of two approaches:

Subtraction of real numbers is defined as addition of signed numbers. Specifically, a number is subtracted by adding its additive inverse, as in the case of 3 − π = 3 + (−π). This helps to keep the ring of real numbers "simple", by avoiding the introduction of "new" operators such as subtraction. Ordinarily, a ring only has two operations defined on it; in the case of the integers, these are addition and multiplication. A ring already has the concept of additive inverses, but it does not have any notion of a separate subtraction operation, so the use of signed addition as subtraction allows for the application of the ring axioms to subtraction— without needing to prove anything.

Subtraction is anti-commutative, meaning that if one reverses the terms in a difference left-to-right, the result is the negative of the original result. Symbolically, if a and b are any two numbers, then

Subtraction is non-associative, which comes up when one tries to define repeated subtraction. In general, the expression

can be defined to mean either (a − b) − c or a − (b − c), but these two possibilities lead to different answers. To resolve this issue, one must establish an order of operations, with different orders yielding different results.

In the context of integers, subtraction of one also plays a special role: for any integer a, the integer (a − 1) is the largest integer less than a, also known as the predecessor of a.

The method of complements is a technique used to subtract one number from another using only addition of positive numbers. This method was commonly used in mechanical calculators, and is still used in modern computers.

To subtract a binary number y (the subtrahend) from another number x (the minuend), the ones' complement of y is added to x and one is added to the sum. The leading digit "1" of the result is then discarded.

The method of complements is especially useful in binary (radix 2) since the ones' complement is very easily obtained by inverting each bit (changing "0" to "1" and vice versa). And adding 1 to get the two's complement can be done by simulating a carry into the least significant bit. For example:

The teaching of subtraction in schools

Methods used to teach subtraction to elementary school vary from country to country, and within a country, different methods are adopted at different times. In what is known in the United States as traditional mathematics, a specific process is taught to students at the end of the 1st year (or during the 2nd year) for use with multi-digit whole numbers, and is extended in either the fourth or fifth grade to include decimal representations of fractional numbers.

Almost all American schools currently teach a method of subtraction using borrowing or regrouping (the decomposition algorithm) and a system of markings called crutches.[11][12] Although a method of borrowing had been known and published in textbooks previously, the use of crutches in American schools spread after William A. Brownell published a study—claiming that crutches were beneficial to students using this method.[13] This system caught on rapidly, displacing the other methods of subtraction in use in America at that time.

Some European schools employ a method of subtraction called the Austrian method, also known as the additions method. There is no borrowing in this method. There are also crutches (markings to aid memory), which vary by country.[14][15]

Both these methods break up the subtraction as a process of one digit subtractions by place value. Starting with a least significant digit, a subtraction of subtrahend:

where each si and mi is a digit, proceeds by writing down m1 − s1, m2 − s2, and so forth, as long as si does not exceed mi. Otherwise, mi is increased by 10 and some other digit is modified to correct for this increase. The American method corrects by attempting to decrease the minuend digit mi+1 by one (or continuing the borrow leftwards until there is a non-zero digit from which to borrow). The European method corrects by increasing the subtrahend digit si+1 by one.

The Austrian method does not reduce the 7 to 6. Rather it increases the subtrahend hundred's digit by one. A small mark is made near or below this digit (depending on the school). Then the subtraction proceeds by asking what number when increased by 1, and 5 is added to it, makes 7. The answer is 1, and is written down in the result's hundred's place.

There is an additional subtlety in that the student always employs a mental subtraction table in the American method. The Austrian method often encourages the student to mentally use the addition table in reverse. In the example above, rather than adding 1 to 5, getting 6, and subtracting that from 7, the student is asked to consider what number, when increased by 1, and 5 is added to it, makes 7.

Subtraction from left to right

In this method, each digit of the subtrahend is subtracted from the digit above it starting from right to left. If the top number is too small to subtract the bottom number from it, we add 10 to it; this 10 is "borrowed" from the top digit to the left, which we subtract 1 from. Then we move on to subtracting the next digit and borrowing as needed, until every digit has been subtracted. Example:

A variant of the American method where all borrowing is done before all subtraction.[16]

Instead of finding the difference digit by digit, one can count up the numbers between the subtrahend and the minuend.[18]

Breaking up the subtraction

Another method that is useful for mental arithmetic is to split up the subtraction into small steps.[19]

The same change method uses the fact that adding or subtracting the same number from the minuend and subtrahend does not change the answer. One simply adds the amount needed to get zeros in the subtrahend.[20]