The Diaguita people are a group of South American indigenous people native to the Chilean Norte Chico and the Argentine Northwest. Western or Chilean Diaguitas lived mainly in the Transverse Valleys incised in a semi-arid environment.[1] Eastern or Argentine Diaguitas lived in the provinces of La Rioja and Catamarca and part of the provinces of Salta, San Juan and Tucumán.[2] The term Diaguita was first applied to peoples and archaeological cultures by Ricardo E. Latcham in early 20th century.[3]

Ancient Diaguitas were not a unified people; the language or dialects used by them seems to have varied from valley to other valleys and they were politically fragmented into several chiefdoms.[1][2] Coastal and inland Chilean Diaguitas traded as evidenced by the archaeological findings of mollusc shells in the upper course of Andean valleys.[4]

According to the 2010 census there are 67,410 self-identified Diaguita descendants in Argentina.[5]

Early Spanish accounts, including Jerónimo de Vivar's Crónica y relación copiosa y verdadera de los reinos de Chile, claim the Diaguitas inhabiting the different Transverse Valleys spoke different languages. Jesuits active in western Argentina also report a large number of languages for the region. Nevertheless, the Chilean Diaguitas scholar Herman Carvajal claims that they could very well have spoken different dialects instead, which would have differed among each other mainly regarding their lexicon.[2]

Kakán was proposed by Rodolfo Schuller and Ricardo E. Latcham to be the single language of the Diaguitas.[2][6] This proposal has been questioned by some scholars but is accepted by others, like Sergio Villalobos.[6]

See also: Origin of the Mapuche, Incas in Central Chile, and Calchaquí Wars

The origin of the Diaguita culture is traced back to an archaeological culture known as El Molle complex which existed from 300 to 700 CE.[1] Later this culture was replaced in Chile by the Las Ánimas complex that developed between 800 and 1000 CE.[1] It is from this last culture that the Archaeological Diaguita culture emerged around 1000 CE.[1][3] The classical Diaguita period was characterized by advanced irrigation systems and by pottery painted in black, white and red.[1] 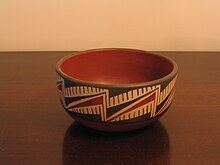 Replica of a Diaguita ceramic bowl from northern Chile.

Mapuche comunities in the southern Diaguita lands –that is Petorca, La Ligua, Combarbalá and Choapa – may be rooted in Pre-Hispanic times at least several centuries before the Spanish arrival.[7] Mapuche toponymy is also found throughout the area.[7] While there was an immigration of Mapuches to the southern Diaguita lands in colonial times Mapuche culture there is judged to be older than this.[7] Indeed in 1954 Grete Mostny postulated the idea of a link between Mapuches and the archaeological culture of El Molle.[8] This idea was followed up by Patricio Bustamante in 2007.[citation needed]

It has been claimed that the Inca Empire expanded into Diaguita lands because of its mineral wealth. This hypothesis is currently under dispute.[9] Another possibility is that the Incas invaded the relatively well-populated Eastern Diaguita valleys to obtain labor to send to Chilean mining districts.[9] It is generally accepted that Diaguita incorporation into the Inca Empire was through warfare which caused a severe depopulation in the Transverse Valleys of Norte Chico.[10] According to scholar Ana María Lorandi the Diaguitas, and specially the Calchaquí Diaguitas, would not have been conquered easily by the Inca Empire.[9] Once conquered the eastern Diaguitas did not unanimously accepted Inca rule.[9] The Incas appointed kurakas and established mitmas in the Chilean Diaguita lands.[1] The Incas did also influence the Diaguitas who adopted pottery designs from Cuzco and Inca techniques in agriculture and metalworking.[10]

Ruins of Quilmes were built by the Quilmes, a Diaguita people.

During the government of García Hurtado de Mendoza in Chile (1557–1561) Chilean Diaguitas that had rebelled were decimated by the Spanish.[13] The Calchaquí Diaguitas of the eastern side of the Andes rose against Spanish rule in 1630 and the last rebels fought until 1642–1643.[14] In this rebellion the Spanish city of La Rioja was close to be destroyed.[9] The Calchaquí Diaguitas only entered Spanish rule after 1665.[9]