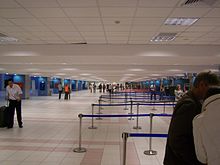 Civil aviation on Rhodes started after the Second World War, on the location of the nearby military Rhodes Maritsa Airport.

This was the island's main airport until 1977, when the new Rhodes International Airport was opened. The need for a new facility was big, as the 'old' Maritsa airport did not meet the needs for a modern civil airport. The new "Diagoras" airport was built in 1977. It was decided that, on this location, it would meet the needs of the island better.

Improvements have been made to the airport, like expansion of taxiways, platform and airport buildings. The most recent upgrade is a new passenger terminal, opened in 2005, to accommodate the growing number of charter flights and passengers. The airport's plants currently cover a total area of 60,000 m2[3]

In 2015, Rhodes Airport was closed for 14 hours after a 'sinkhole' appeared in the runway. Flights were diverted to surrounding airports such as Kos and Heraklion as well as Athens and the runway was fixed and reopened shortly afterwards.

In December 2015, the privatisation of Rhodes International Airport and 13 other regional airports of Greece was finalised with the signing of the agreement between the Fraport AG/Copelouzos Group joint venture and the state privatisation fund.[4] "We signed the deal today," the head of Greece's privatisation agency HRADF, Stergios Pitsiorlas, told Reuters.[5] According to the agreement, the joint venture will operate the 14 airports (including Rhodes International Airport) for 40 years as of autumn 2016.

Rhodes Airport terminal is actually 2 separate buildings with a joined corridor in the middle. Departures are served both in ground (check-ins, baggage checks) and first floor (passenger screening, gates, shops) while arrivals are served only in ground floor's southern corner where passport control, customs and baggage reclaim operate. Airport does not have air bridges so boarding and disembarking require the use of buses.

Both terminals are and will be under renovations for the next couple of years from Fraport as a series of chronic problems need to be addressed. Toilets and air conditioning system were first to be fixed while more complicated works including new check in facilities that will eliminate double checks for baggage as well interior remodeling will proceed gradually during low traffic winter months.

The airport's single runway direction is 070/250, having a length of 3,306 meters and a width of 60 meters. There are six taxiways connecting the runway with the terminal. Tarmac can accommodate up to 14 airplanes simultaneously and up to A380. New parking spots as well rearrangements on airplanes' parking patterns engaging ground vehicles is expected to increase capacity.

On 22 March 2017, the Fraport-Greece presented its master plan for the 14 regional airports including the International Airport of Rhodes.[6]

The following summarizes the enhancement changes that started in November 2017 and will be implemented for Rhodes International Airport under Fraport Greece’s investment plan: Immediate actions that were implemented at the airports as soon as Fraport Greece took over operations and before the launch of the 2017 Summer season included:

Figures are taken from the Hellenic Civil Aviation Authority (CAA) [60] until 2016 and since 2017 from the official website of the airport.[61]

Public bus: Bus service is provided between the Airport and the city of Rhodes (No 23-35). Bus stop is located between the new and the old terminal.[62]

Car: Rhodes Airport is located 14 km from the city of Rhodes and is accessible from the provincial road Rhodes-Kamiros.[64]