A dhow in the Indian Ocean, near the islands of Zanzibar on the Swahili Coast. 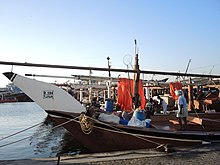 Fishermen's dhows moored at Dubai in 2014

Dhow (Arabic داو dāwa Marathi "dāw") is the generic name of a number of traditional sailing vessels with one or more masts with settee or sometimes lateen sails, used in the Red Sea and Indian Ocean region. Historians are divided as to whether the dhow was invented by Arabs or Indians.[1][2] Typically sporting long thin hulls, dhows are trading vessels primarily used to carry heavy items, such as fruit, fresh water, or other heavy merchandise, along the coasts of Eastern Arabia (Arab states of the Persian Gulf),[3] East Africa, Yemen and coastal South Asia (Pakistan, India, Bangladesh). Larger dhows have crews of approximately thirty, smaller ones typically around twelve.

The exact origins of the dhow are lost to history. Most Historians are divided as to whether the dhow was invented by Arabs or Indians before 600 AD.[1][4] Some claim that the sambuk, a type of dhow, may be derived from the Portuguese caravel.[5]

The dhow was the ship of trade used by the Swahili. They could be massive. It was a dhow that transported a giraffe to Chinese Emperor Yong Le's court, in 1414.[6]

Ships that are similar to the Dhow are mentioned or described in the 1001 Nights including various ports where they harboured. The Dhow is also associated with the Pearl trade.

The Yemeni Hadhrami people, as well as Omanis, for centuries came to Beypore, in Kerala, India for their dhows. This was because of the good timber in the Kerala forests, the availability of good coir rope, and the skilled carpenters who specialized in ship building. In former times, the sheathing planks of a dhow's hull were held together by coconut rope. Beypore dhows are known as 'Uru' in Malayalam, the local language of Kerala. Settlers from Yemen, known as 'Baramis', are still active in making urus in Kerala.

In the 1920s, British writers identified Al Hudaydah as the centre for dhow building. Those built in Al Hudaydah were smaller in size, and used for travel along the coasts. They were constructed of acacia found in Yemen.[7]

Captain Alan Villiers (1903–1982) documented the days of sailing trade in the Indian Ocean by sailing on dhows between 1938 and 1939 taking numerous photographs and publishing books on the subject of dhow navigation.[8][9]

Even to the present day, dhows make commercial journeys between the Persian Gulf and East Africa using sails as their only means of propulsion. Their cargo is mostly dates and fish to East Africa and mangrove timber to the lands in the Persian Gulf. They often sail south with the monsoon in winter or early spring, and back again to Arabia in late spring or early summer.[citation needed]

For celestial navigation, dhow sailors have traditionally used the kamal, an observation device that determines latitude by finding the angle of the Pole Star above the horizon.[10] 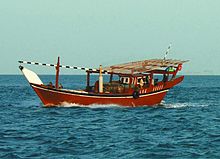 A Jalibut in the Persian Gulf

The term "dhow" is sometimes also applied to certain smaller lateen-sail rigged boats traditionally used in the Red Sea, the eastern Mediterranean and the Persian Gulf area, as well as in the Indian Ocean from Madagascar to the Bay of Bengal. These include the feluccas used in Egypt, Sudan and Iraq, and the dhoni used in the Maldives, as well as the tranki, ghrab and ghalafah.[21] All these vessels have common elements with the dhow. On the Swahili Coast, in countries such as Kenya, the Swahili word used for dhow is "jahazi".[1]