Humidity Relative humidity Dew
This article is about the meteorological dew point. For the petroleum term, see Hydrocarbon dew point.

The dew point is the temperature to which air must be cooled to become saturated with water vapor. When cooled further, the airborne water vapor will condense to form liquid water (dew). When air cools to its dew point through contact with a surface that is colder than the air, water will condense on the surface.[1][2]

When the temperature is below the freezing point of water, the dew point is called the frost point, as frost is formed via deposition rather than condensation to form dew.[3] The measurement of the dew point is related to humidity. A higher dew point means there is more moisture in the air.[2]

In liquids, the cloud point is the equivalent term.

In technical terms, the dew point is the temperature at which the water vapor in a sample of air at constant barometric pressure condenses into liquid water at the same rate at which it evaporates.[5] At temperatures below the dew point, the rate of condensation will be greater than that of evaporation, forming more liquid water. The condensed water is called dew when it forms on a solid surface, or frost if it freezes. In the air, the condensed water is called either fog or a cloud, depending on its altitude when it forms. If the temperature is below the dew point, and no dew or fog forms, the vapor is called supersaturated. This can happen if there are not enough particles in the air to act as condensation nuclei.[6]

General aviation pilots use dew point data to calculate the likelihood of carburetor icing and fog, and to estimate the height of a cumuliform cloud base. 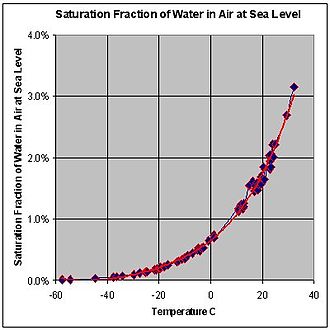 Increasing the barometric pressure increases the dew point.[8] This means that, if the pressure increases, the mass of water vapor per volume unit of air must be reduced in order to maintain the same dew point. For example, consider New York City (33 ft or 10 m elevation) and Denver (5,280 ft or 1,610 m elevation[9]). Because Denver is at a higher elevation than New York, it will tend to have a lower barometric pressure. This means that if the dew point and temperature in both cities are the same, the amount of water vapor in the air will be greater in Denver.

When the air temperature is high, the human body uses the evaporation of sweat to cool down, with the cooling effect directly related to how fast the perspiration evaporates. The rate at which perspiration can evaporate depends on how much moisture is in the air and how much moisture the air can hold. If the air is already saturated with moisture, perspiration will not evaporate. The body's thermoregulation will produce perspiration in an effort to keep the body at its normal temperature even when the rate at which it is producing sweat exceeds the evaporation rate, so one can become coated with sweat on humid days even without generating additional body heat (such as by exercising).

As the air surrounding one's body is warmed by body heat, it will rise and be replaced with other air. If air is moved away from one's body with a natural breeze or a fan, sweat will evaporate faster, making perspiration more effective at cooling the body. The more unevaporated perspiration, the greater the discomfort.

A wet bulb thermometer also uses evaporative cooling, so it provides a good measure for use in evaluating comfort level.

Lower dew points, less than 10 °C (50 °F), correlate with lower ambient temperatures and cause the body to require less cooling. A lower dew point can go along with a high temperature only at extremely low relative humidity, allowing for relatively effective cooling.

People inhabiting tropical and subtropical climates acclimatize somewhat to higher dew points. Thus, a resident of Singapore or Miami, for example, might have a higher threshold for discomfort than a resident of a temperate climate like London or Chicago. People accustomed to temperate climates often begin to feel uncomfortable when the dew point gets above 15 °C (59 °F), while others might find dew points up to 18 °C (64 °F) comfortable. Most inhabitants of temperate areas will consider dew points above 21 °C (70 °F) oppressive and tropical-like, while inhabitants of hot and humid areas may not find this uncomfortable. Thermal comfort depends not just on physical environmental factors, but also on psychological factors.[11]

Devices called hygrometers are used to measure dew point over a wide range of temperatures. These devices consist of a polished metal mirror which is cooled as air is passed over it. The temperature at which dew forms is, by definition, the dew point. Manual devices of this sort can be used to calibrate other types of humidity sensors, and automatic sensors may be used in a control loop with a humidifier or dehumidifier to control the dew point of the air in a building or in a smaller space for a manufacturing process. 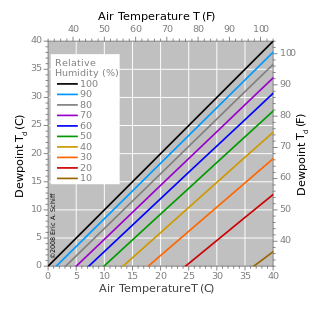 Graph of the dependence of the dew point upon air temperature for several levels of relative humidity.
See also: Psychrometric chart

A well-known approximation used to calculate the dew point, Tdp, given just the actual ("dry bulb") air temperature, T (in degrees Celsius) and relative humidity (in percent), RH, is the Magnus formula:

The more complete formulation and origin of this approximation involves the interrelated saturated water vapor pressure (in units of millibars, also called hectopascals) at T, Ps(T), and the actual vapor pressure (also in units of millibars), Pa(T), which can be either found with RH or approximated with the barometric pressure (in millibars), BPmbar, and "wet-bulb" temperature, Tw is (unless declared otherwise, all temperatures are expressed in degrees Celsius):

For greater accuracy, Ps(T) (and therefore γ(T, RH)) can be enhanced, using part of the Bögel modification, also known as the Arden Buck equation, which adds a fourth constant d:

There are several different constant sets in use. The ones used in NOAA's presentation[12] are taken from a 1980 paper by David Bolton in the Monthly Weather Review:[13]

Another common set of values originates from the 1974 Psychrometry and Psychrometric Charts, as presented by Paroscientific,[15]

Also, in the Journal of Applied Meteorology and Climatology,[16] Arden Buck presents several different valuation sets, with different maximum errors for different temperature ranges. Two particular sets provide a range of −40 °C to +50 °C between the two, with even lower maximum error within the indicated range than all the sets above:

There is also a very simple approximation that allows conversion between the dew point, temperature, and relative humidity. This approach is accurate to within about ±1 °C as long as the relative humidity is above 50%:

This can be expressed as a simple rule of thumb:

The derivation of this approach, a discussion of its accuracy, comparisons to other approximations, and more information on the history and applications of the dew point are given in the Bulletin of the American Meteorological Society.[17]

For temperatures in degrees Fahrenheit, these approximations work out to

For example, a relative humidity of 100% means dew point is the same as air temp. For 90% RH, dew point is 3 °F lower than air temperature. For every 10 percent lower, dew point drops 3 °F.

The frost point is similar to the dew point in that it is the temperature to which a given parcel of humid air must be cooled, at constant atmospheric pressure, for water vapor to be deposited on a surface as ice crystals without undergoing the liquid phase (compare with sublimation). The frost point for a given parcel of air is always higher than the dew point, as the stronger bonding between water molecules on the surface of ice requires higher temperature to break.[18]