listen) TEE-shəkh,[2] Irish: [ˈt̪ˠiːʃəx]) is the prime minister and head of government of Ireland.[note 2] The Taoiseach is appointed by the President upon the nomination of Dáil Éireann, the lower house of the Oireachtas (parliament), and must retain the support of a majority in the Dáil to remain in office.

The word taoiseach (plural taoisigh, pronounced [t̪ˠiːʃʲɪɟ] TEE-shee) means "chief" or "leader" in Irish and was adopted in the 1937 Constitution of Ireland as the title of the "head of the Government, or Prime Minister".[note 2] Taoiseach is the official title of the head of government in both English and Irish, and is not used for other countries' prime ministers (who are referred to in Irish as Príomh Aire, [ˌpˠɾˠiːvˠ ˈaɾʲə] pree-VAIR-ə). The Irish form, An Taoiseach, is sometimes used in English instead of "the Taoiseach".

Micheál Martin TD is the current Taoiseach; he took office on 27 June 2020, following a coalition agreement between his party Fianna Fáil, Fine Gael, and the Green Party.[3]

Under the Constitution of Ireland, the Taoiseach is nominated by a simple majority of the voting members of Dáil Éireann. They are then formally appointed to office by the President, who is required to appoint whomever the Dáil designates, without the option of declining to make the appointment. For this reason, the Taoiseach may, informally, be said to have been "elected" by Dáil Éireann.

If the Taoiseach loses the support of a majority in Dáil Éireann, they are not automatically removed from office. Instead, they are compelled either to resign or to persuade the President to dissolve the Dáil. If the President refuses to grant a dissolution, this effectively forces the Taoiseach to resign. To date, no president has exercised this prerogative, although the option arose in 1944 and 1994, and twice in 1982. The Taoiseach may lose the support of Dáil Éireann by the passage of a vote of no confidence, or implicitly, through the failure of a vote of confidence. Alternatively, the Dáil may refuse supply.[note 3] In the event of the Taoiseach's resignation, they continue to exercise the duties and functions of office until the appointment of a successor.

A proposed increase of €38,000 in 2007 was deferred when Brian Cowen became Taoiseach[5] and in October 2008, the government announced a 10% salary cut for all ministers, including the Taoiseach.[6] However this was a voluntary cut and the salaries remained nominally the same with both ministers and Taoiseach essentially refusing 10% of their salary. This courted controversy in December 2009 when a salary cut of 20% was based on the higher figure before the refused amount was deducted.[7] The Taoiseach is also allowed an additional €118,981 in annual expenses.

There is no official residence of the Taoiseach. In 2008 it was reported speculatively that the former Steward's Lodge at Farmleigh adjoining the Phoenix Park would become the official residence of the Taoiseach; however no official statements were made nor any action taken.[8] The house, which forms part of the Farmleigh estate acquired by the State in 1999 for €29.2m, was renovated at a cost of nearly €600,000 in 2005 by the Office of Public Works. Former Taoiseach Bertie Ahern did not use it as a residence, but his successor Brian Cowen used it occasionally.[9]

"Mór Chluana" ("More of Cloyne") is a traditional air collected by Patrick Weston Joyce in 1873.[10][11] "Amhrán Dóchais" ("Song of Hope") is a poem written by Osborn Bergin in 1913 and set to the air.[11][12] John A. Costello chose the air as his musical salute.[12] The salute is played by army bands on the arrival of the Taoiseach at state ceremonies. Though the salute is often called "Amhrán Dóchais", Brian Ó Cuív argues "Mór Chluana" is the correct title.[12][13]

The words Taoiseach and Tánaiste (the title of the deputy prime minister) are both from the Irish language and of ancient origin. Though the Taoiseach is described in the Constitution of Ireland as "the head of the Government or Prime Minister",[note 2] its literal translation is chieftain or leader.[14] Although Éamon de Valera, who introduced the title in 1937, was neither a Fascist nor a dictator, it has sometimes been remarked that the meaning leader in 1937 made the title similar to the titles of Fascist dictators of the time, such as Führer (Hitler), Duce (Mussolini) and Caudillo (Franco).[15][16][17] Tánaiste, in turn, refers to the system of tanistry, the Gaelic system of succession whereby a leader would appoint an heir apparent while still living.

In Scottish Gaelic, tòiseach translates as clan chief and both words originally had similar meanings in the Gaelic languages of Scotland and Ireland.[note 4][18][19][note 5] The related Welsh language word tywysog (current meaning: 'prince') has a similar origin and meaning.[note 6] It is hypothesized that both derive ultimately from the proto-Celtic *towissākos 'chieftain, leader'.[20][21]

Although the Irish form An Taoiseach is sometimes used in English instead of 'the Taoiseach',[22] the English version of the Constitution states that he or she "shall be called ... the Taoiseach".[note 2]

Debate on the title

It seems to me to be mere make-believe to try to incorporate a word like "Taoiseach" in the English language. It would be pronounced wrongly by 99 percent of the people. I have already ascertained it is a very difficult word to pronounce correctly. That being so, even for the sake of the dignity of the Irish language, it would be more sensible that when speaking English we should be allowed to refer to the gentleman in question as the Prime Minister... It is just one more example of the sort of things that are being done here as if for the purpose of putting off the people in the North. No useful purpose of any kind can be served by compelling us, when speaking English, to refer to An Taoiseach rather than to the Prime Minister.

The President of the Executive Council, Éamon de Valera, gave the term's meaning as "chieftain" or "Captain". He said he was "not disposed" to support the proposed amendment and felt the word "Taoiseach" did not need to be changed. The proposed amendment was defeated on a vote and "Taoiseach" was included as the title ultimately adopted by plebiscite of the people.[24] 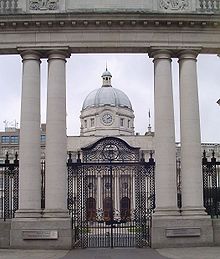 Department of the Taoiseach at Government Buildings, Merrion Street, Dublin

The modern position of Taoiseach was established by the 1937 Constitution of Ireland and is the most powerful role in Irish politics. The office replaced the position of President of the Executive Council of the 1922–1937 Irish Free State.

In contrast, the Taoiseach created in 1937 possesses a much more powerful role. The holder of the position can both advise the President to dismiss ministers and dissolve Parliament on his own authority—advice that the President is almost always required to follow by convention.[note 7] His role is greatly enhanced because under the Constitution, he is both de jure and de facto chief executive. In most other parliamentary democracies, the head of state is at least the nominal chief executive, while being bound by convention to act on the advice of the cabinet. In Ireland, however, executive power is explicitly vested in the Government, of which the Taoiseach is the leader.

Since the Taoiseach is the head of government, and may remove ministers at will, many of the powers specified, in law or the constitution, to be exercised by the government as a collective body, are in reality at the will of the Taoiseach. The Government almost always backs the Taoiseach in major decisions, and in many cases often merely formalizes that decision at a subsequent meeting after it has already been announced. Nevertheless the need for collective decision making on paper acts as a safeguard against an unwise decision made by the Taoiseach.

Historically, where there have been multi-party or coalition governments, the Taoiseach has been the leader of the largest party in the coalition. One exception to this was John A. Costello, who was not leader of his party, but an agreed choice to head the government, because the other parties refused to accept then Fine Gael leader Richard Mulcahy as Taoiseach. In 2010 Taoiseach Brian Cowen, in the midst of highly unpopular spending cuts after the global financial crash, maintained his position as Taoiseach until new elections, but stood down as leader of Fianna Fáil and allowed Micheál Martin (who had resigned in protest at the way Cowen responded to the crises) to succeed him.

Before the enactment of the 1937 Constitution, the head of government was referred to as the President of the Executive Council. This office was first held by W. T. Cosgrave of Cumann na nGaedheal from 1922 to 1932, and then by Éamon de Valera of Fianna Fáil from 1932 to 1937. By convention, Taoisigh are numbered to include Cosgrave;[25][26][27][28] for example, Micheál Martin is considered the 15th Taoiseach, not the 14th.