Denis Sassou Nguesso (born 23 November 1943) is a Congolese politician who has been the President of the Republic of the Congo since 1997. He was previously President from 1979 to 1992. During his first period as President, he headed the single-party régime of the Congolese Party of Labour (PCT) for 12 years. Under pressure from international sources, he introduced multiparty politics in 1990 and was then stripped of executive powers by the 1991 National Conference, remaining in office as a ceremonial head of state. He stood as a candidate in the 1992 presidential election but was defeated, placing third.

Sassou Nguesso is backed by a variety of political parties, most importantly the PCT. He is the President of the PCT Central Committee.

A member of the Mbochi tribe, Sassou Nguesso was born in Edou in the Oyo district in northern Congo in 1943. His parents are Julien Nguesso and Émilienne Mouebara.[2] Nguesso was the youngest child in the family.[3] His father Julien was a notable hunter chief in Edou.[4] He received primary education in Fort Rousset, now Owando. He studied in Dolisie Normal College between 1956 and 1960.[5] He joined the army in 1960 just before the country was granted independence.[6] He was marked for prominence and received military training in Algeria. In 1962, he returned to Congo and was reassigned to active officers with the rank of second lieutenant. He also received military training in Saint Maixent, France, graduating with the rank of lieutenant,[5] before returning to join Congo's elite paratroop regiment.[7] He was one of the first officers of the Airborne Group, the first paratroop battalion of the Congolese Army, which was created in 1965.[5] He commanded the Airborne Group, the army and the Brazzaville Military Zone (ZAB), then headed the Intelligence department of the State Security Services. He became captain, then commander, and was promoted to colonel (1978) and later as army general (1989).[5]

He had socialist leanings and supported the opposition to Fulbert Youlou in Les Trois Glorieuses of August 1963. He was later part of the 1968 military coup that brought Marien Ngouabi to power, and he was a founding member of the Congolese Party of Labor (Parti Congolais du Travail, PCT) in December 1969.[citation needed]

In 1970, Sassou Nguesso was made Director of Security and a minister in the new presidential council. During the extraordinary session of the Central Committee of the PCT, which was held from 5 to 12 December 1975, the party's political bureau was dissolved and a five-member Revolutionary Special Staff was established with Nguesso as one of its member.[5] When Ngouabi was assassinated in March 1977, Nguesso played a key role in maintaining control, briefly heading the Military Committee of the Party (CMP, Comité Militaire du Parti) that controlled the state until the succession of Colonel Joachim Yhombi-Opango. Sassou Nguesso was rewarded with a promotion to colonel and the post of vice-president of the CMP. He remained there until 5 February 1979, when Yhombi-Opango was forced from power in a technical coup, accused of corruption and political deviancy. On 8 February, the CMP chose Nguesso as the new President, and at the Third Extraordinary Congress of the PCT his position was unanimously approved on 27 March 1979.[8]

As the newly elected president, Sassou Nguesso negotiated loans from the International Monetary Fund and allowed foreign investors from France and the Americas to operate in the vital oil and mineral extraction operations. He also traveled to Moscow in 1981 to sign a twenty-year friendship pact with the Soviet Union.

Sassou Nguesso was re-elected for a five-year term as President of the PCT Central Committee and President of the Republic at the party's Third Ordinary Congress on 27–31 July 1984;[9] he was sworn in for his new term on 10 November 1984, and on this occasion he announced the release of Yhombi-Opango.[10] He was Chairman of the Organization of African Unity from 1986 to 1987. In late 1987 he faced down a serious military revolt in the north of the country with French aid.

At the PCT's Fourth Ordinary Congress on 26–31 July 1989, Sassou Nguesso was re-elected as President of the PCT Central Committee and President of the Republic.[11] With the collapse of the socialist states of Eastern Europe, with influence from the French, Sassou Nguesso began to prepare the process of bringing the country to capitalism.[citation needed] In December 1989 he announced the end of government control of the economy and declared a partial amnesty for political prisoners. Into the following year he attempted to improve the failing economic situation and reduce the outrageous levels of corruption. Starting in September 1990 political parties other than the PCT were allowed and Sassou Nguesso made a symbolic state visit to the United States of America, laying the grounds for a new series of conditional IMF loans later that year.[citation needed]

In February 1991, a national conference began; the opposition gained control of the conference, and the conference's declaration of its own sovereignty was not challenged by Sassou Nguesso. The conference, which concluded in June 1991, chose André Milongo as prime minister during the transitional period leading to scheduled elections in 1992. Milongo was given executive powers, leaving Sassou Nguesso as effectively a figurehead president.[12] Sassou Nguesso's power was so limited by the Conference that he was barred from travelling outside of Congo without the transitional government's approval. He was also subjected to serious criticism and allegations during the Conference, including a claim from some delegates that he was involved in Ngouabi's 1977 assassination.[12][13] His eventual response to the criticism on 26 April was "repentant rather than defiant" in tone.[12]

In the parliamentary election of June–July 1992, the PCT won only 19 of 125 seats in the National Assembly; the Pan-African Union for Social Democracy (UPADS) was the largest party, with the Congolese Movement for Democracy and Integral Development (MCDDI) another strong force. In the August 1992 presidential election, Sassou Nguesso was eliminated in the first round, in which he placed third with 17% of the vote. Although he performed strongly in the north, he fared poorly in the rest of the country. The second round was held between Pascal Lissouba (UPADS) and Bernard Kolelas (MCDDI); Sassou Nguesso backed Lissouba, who won in the second round with 61% of the vote, although he and the PCT quickly went into opposition after the PCT received fewer positions in government under Lissouba than it had anticipated.[14]

Lissouba began his rule dogged with accusations of voting irregularities and he had to act with increasing repression to maintain his power.[citation needed] From November 1993 to 1994, clashes between supporters of Kolelas and Lissouba resulted in the first Civil War, leaving almost 1500[citation needed] people dead. In 1994 Sassou Nguesso left the country for Paris.[citation needed] He returned to Congo on 26 January 1997 and intended to contest the presidential election scheduled for July.[15]

In May 1997, a visit by Sassou Nguesso to Owando, Yhombi-Opango's political stronghold, led to the outbreak of violence between his supporters and those of Yhombi-Opango. On 5 June 1997, government forces surrounded Sassou Nguesso's home in the Mpila section of Brazzaville, attempting to arrest two men, Pierre Aboya and Engobo Bonaventure, who had been implicated in the earlier violence. Fighting broke out between the government forces and Sassou Nguesso's fighters, called Cobras, and led to the outbreak of the second Civil War (1997–1999). By October, Sassou Nguesso, who was aided at the end of the war by Angolan troops, was in control of the country, and he was sworn in as President on 25 October.[15]

With the government forces controlling a majority of territory, peace agreements were signed in December 1999, although not all rebel groups signed the accords.[citation needed] A constitutional referendum on 20 January 2002 paved the way for Presidential elections. 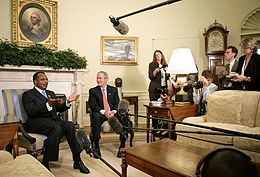 Denis Sassou Nguesso and George W. Bush in the Oval Office in 2006.

On 10 March 2002 Sassou Nguesso won with almost 90% of the vote; his two main rivals Lissouba and Kolelas were prevented from competing. The only remaining credible rival, André Milongo, withdrew his candidacy three days before the election day, claiming that the election would be rigged. A new constitution was agreed upon in January 2002 which granted the president new powers and extended presidential terms from five to seven years. While the 2002 elections were hailed as being free of violence, they conferred little legitimacy on Sassou Nguesso's régime due to the lack of meaningful participation by opposition parties. Sassou Nguesso was sworn in on 14 August 2002.[16]

Having already served as the Chairman of the Organisation of African Unity in 1986–1987, he was elected Chairman of the African Union, the OAU's successor body, in January 2006. His election was the result of a compromise reached to prevent the chairmanship from going to Omar al-Bashir, President of Sudan.[citation needed]

Sassou Nguesso was re-elected as President of the Central Committee of the PCT at the party's Fifth Extraordinary Congress in December 2006.[17] In January 2007, Sassou Nguesso's international reputation suffered a blow after a panel of judges in France reopened an official investigation into the alleged role of Sassou Nguesso's government in the 1999 disappearance of 353 Congolese refugees.[18][clarification needed] 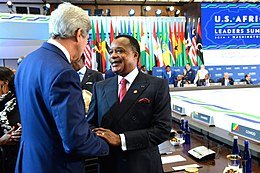 Re-elected in the July 2009 presidential election with 78.61% of the vote amidst an opposition boycott, Sassou Nguesso was sworn in for another seven-year term at a ceremony in Brazzaville on 14 August 2009. He said that his re-election meant continued "peace, stability and security", and he called for an end to "thinking like ... freeloaders" in reference to international aid received by the country. Sassou Nguesso also made an important announcement at his inauguration, saying that he would set in motion an amnesty bill to pardon Pascal Lissouba, who had gone into exile after his 1997 ouster and was convicted of crimes in absentia. Sassou Nguesso said that he wanted the amnesty bill to be presented to Parliament by the end of 2009.[19] As Congo-Brazzaville prepared to celebrate the 50th anniversary of its independence from France in 2010, Sassou Nguesso noted that the country had far to go in fully realizing the dream of independence: "Our country will not be totally independent until our people are free of the yoke of poverty." He presided over a large parade in Brazzaville, featuring thousands of soldiers and civilians, to celebrate the anniversary on 15 August 2010.[20]

On 27 March 2015 Sassou Nguesso announced that his government would hold a referendum to change the 2002 constitution, which would allow him to run for a third consecutive term in office.[21] The proposal to change the constitution was overwhelmingly approved by voters, with 92.96% in favor. Turnout was placed at 72.44%.[22] The opposition argued that due to low turnout the results should be annulled.[23]

In September 2006, during the United Nations General Assembly meeting, Sassou Nguesso's entourage, including several members of his family, occupied 44 rooms which together cost £130,000. Almost £14,000 of room service at the Waldorf Astoria was added to Sassou Nguesso's bill during a five-night stay, including two bottles of Cristal champagne charged at £400. The total was pointed out by the British newspaper The Sunday Times to be "comfortably more than the £106,000 that Britain gave the Republic of Congo in humanitarian aid in 2006."[24]

In July 2007, the British NGO Global Witness published documents on its website that appear to show that the President's son, Denis Christel Sassou Nguesso, may have spent hundreds of thousands of dollars of money that may derive from the country's oil sales on shopping sprees in Paris and Dubai.[25] The documents show that in August 2006 alone, Denis Christel, who was the head of Cotrade – the marketing branch of Congo's state oil firm SNPC – spent $35,000 on purchases from designers such as Louis Vuitton and Roberto Cavalli.[26] Reputation management company Schillings Solicitors attempted to suppress this information, but the application failed.[27]