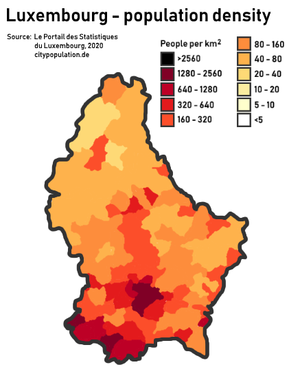 Population density in Luxembourg by commune

The following is an overview of the demographics of Luxembourg. Demographic topics include basic statistics, most populous cities, and religious affiliation.

The people of Luxembourg are called Luxembourgers.[4] 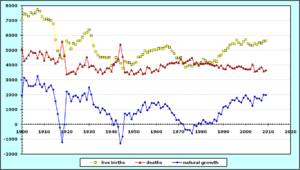 Vital statistics of Luxemburg 1900 till present.

The following table chronicles factors such as population, birth rates, and death rates in Luxembourg since 1900.[5]

The foreign population resident in Luxembourg currently numbers over 296,465, corresponding to 47.4% of the total population (compared to 13.2% in 1961).[3] That means there are currently almost as many immigrants as there are native citizens. These immigrants are overwhelmingly[7] nationals of EU countries (accounting for over 80%), by far the greater part of whom originally come from Portugal, Italy and the two neighbouring countries, France and Belgium. For some years, there has also been a large increase in the number of immigrants and asylum seekers from the countries of Eastern Europe, and especially the new republics to have emerged from the former Yugoslavia (Bosnia and Herzegovina, Serbia and Montenegro). These immigrants include a considerable proportion of young people. Immigrants (especially asylum seekers) have a strong impact on the birth rate, accounting for nearly 50% of births in Luxembourg.

A more detailed breakdown by nationality[7] shows that the Portuguese community is still the largest group, accounting for almost a third of the foreign population. The Italian population has been stable for the past ten years at approximately 20,000. Some 80,000 foreigners come from bordering countries (France, Belgium and Germany).

As of 2020 the population of Russian nationals in Luxembourg is 1,857.[7] Luxembourg Russian Saturday school, Kalinka, serves students ages 3–12 and includes Russian language and cultural classes. In 2014, there were 160 students and 22 teachers in the school.[8]

The Japanese Supplementary School in Luxembourg (ルクセンブルグ補習授業校 Rukusenburugu Hoshū Jugyō Kō) is a Japanese supplementary school operated in the country,[9] serving students ages 6–15. It is held at the International School Luxembourg and as of 2014 has about 60 students. Its operations at the ISL began in 1991.[8]

The predominant religion of the Luxembourg population is Roman Catholic, with Protestant, Anglican, Jewish, Muslim and Hindu minorities. According to a 1979 law, the government forbids collection of data on religious practices, but over 90% is estimated to be baptized Catholic (the Virgin Mary is the Patroness of the city of Luxembourg). 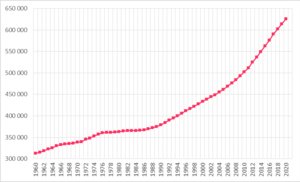 Demographics of Luxembourg, Data of FAO, year 2005 ; Number of inhabitants in thousands.

The following demographic statistics are from the CIA World Factbook, unless otherwise indicated.

The following table lists the percentage of citizens of Luxembourg who are able to speak a native language, or two or more languages.[11]

Additionally, people born in foreign countries and temporary guest workers make up more than a third (40%) of the population of Luxembourg. Although most of these foreign born people primarily speak German and French, a significant minority also are native Portuguese, Italian, and English.[12]