Xi Jinping Li Keqiang People&#39;s Police of the People&#39;s Republic of China
Method of leadership in which political decisions reached by the party are binding upon all members of the party 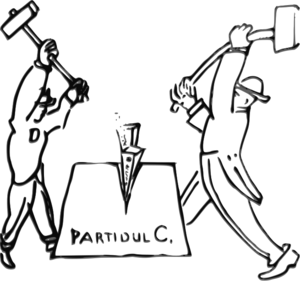 Anti-factionalist cartoon by the exile section of the Romanian Communist Party, December 1931

In party meetings, a motion (new policy or amendment, goal, plan or any other kind of political question) is proposed. After a period of debate, a vote is taken. If one vote clearly wins (gaining a share of 60% or above among two options, for example) all party members are expected to follow that decision, and not continue propagandizing or otherwise working against it, aiming to act in unity. In the development of socialism in the Soviet Union and China, it was largely taken up in response to dramatic developments and violence which required faster mechanisms of decision-making. A constellation of practices surround this in order to encourage participation and debate, such as Don't Blame the Speaker.[4]

The text What Is to Be Done? from 1902 is popularly seen as the founding text of democratic centralism. At this time, democratic centralism was generally viewed as a set of principles for the organizing of a revolutionary workers' party. However, Vladimir Lenin's model for such a party, which he repeatedly discussed as being "democratic centralist", was the German Social Democratic Party, inspired by remarks made by the social democrat Jean Baptista von Schweitzer. Lenin described democratic centralism as consisting of "freedom of discussion, unity of action".[1]

The doctrine of democratic centralism served as one of the sources of the split between the Bolsheviks and the Mensheviks. The Mensheviks supported a looser party discipline within the Russian Social Democratic Labour Party in 1903 as did Leon Trotsky, in Our Political Tasks,[5] although Trotsky joined ranks with the Bolsheviks in 1917.

The Sixth Party Congress of the Russian Social-Democratic Labour Party (Bolsheviks) held at Petrograd between 26 July and 3 August 1917 defined democratic centralism as follows:

After the successful consolidation of power by the Communist Party following the October Revolution and the Russian Civil War, the Bolshevik leadership, including Lenin, instituted a ban on factions in the party as Resolution No. 12 of the 10th Party Congress in 1921. It was passed in the morning session on 16 March 1921.[7] Trotskyists sometimes claim that this ban was intended to be temporary, but there is no language in the discussion at the 10th Party Congress suggesting such.[8]

The Group of Democratic Centralism was a group in the Soviet Communist Party who advocated different concepts of party democracy.

In On Party Unity, Lenin argued that democratic centralism prevents factionalism. He argued that factionalism leads to less friendly relations among members and that it can be exploited by enemies of the party.

By the Brezhnev period, democratic centralism was described in the 1977 Soviet Constitution as a principle for organizing the state: "The Soviet state is organized and functions on the principle of democratic centralism, namely the electiveness of all bodies of state authority from the lowest to the highest, their accountability to the people, and the obligation of lower bodies to observe the decisions of higher ones". Democratic centralism combines central leadership with local initiative and creative activity and with the responsibility of each state body and official for the work entrusted to them.

For much of the time between the era of Joseph Stalin and the 1980s, the principle of democratic centralism meant that the Supreme Soviet, while nominally vested with great lawmaking powers, did little more than approve decisions already made at the highest levels of the Communist Party. When the Supreme Soviet was not in session, the Presidium of the Supreme Soviet performed its ordinary functions. Nominally, if such decrees were not ratified by the full Supreme Soviet, they were considered revoked. However, ratification was usually a mere formality, though occasionally even this formality was not observed.[9] Thus, decisions made by the Party's top leaders de facto had the force of law.

The democratic centralist principle extended to elections in the Soviet Union. All Communist countries were—either de jure or de facto—one-party states. In most cases, the voters were presented with a single list of unopposed candidates,[10] which usually won 90 percent or more of the vote.[10] In some countries, those who did not vote for the lone candidate on the ballot could face serious reprisals.[11][page needed][12]

Democratic centralism is also stated in Article 3 of the present Constitution of the People's Republic of China:

Article 3. The state organs of the People's Republic of China apply the principle of democratic centralism. The National People's Congress and the local people's congresses at different levels are instituted through democratic election. They are responsible to the people and subject to their supervision. All administrative, judicial and procuratorial organs of the state are created by the people's congresses to which they are responsible and under whose supervision they operate. The division of functions and powers between the central and local state organs is guided by the principle of giving full play to the initiative and enthusiasm of the local authorities under the unified leadership of the central authorities.[13]

This idea is translated into the supremacy of the National People's Congress, which represents China's citizens and exercises legislative authority on their behalf. Other powers, including the power to appoint the head of state and head of government, are also vested in this body.

The Communist Party of Vietnam is organized according to the Leninist principle of Democratic centralism.