Declaration of Independence of Ukraine

Ukraine Verkhovna Rada Leonid Kravchuk
Ukrainian secession from the USSR
Not to be confused with Declaration of Ukrainian Independence, 1941.

The Act was adopted in the aftermath of the coup attempt on 19 August when hardline Communist leaders of the Soviet Union tried to restore central Communist party control over the USSR.[1] In response (during a tense 11-hour extraordinary session[3]), the Supreme Soviet (parliament) of the Ukrainian SSR in a special Saturday session overwhelmingly approved the Act of Declaration.[1] The Act passed with 321 votes in favor, 2 votes against, and 6 abstentions (out of 360 attendants).[3] The text was largely composed during the night of 23 August–24 August mainly by Levko Lukyanenko, Serhiy Holovatyi, Mykhailo Horyn, Ivan Zayets and Vyacheslav Chornovil.[4]

The Communists (CPU), being persuaded behind the scenes by their fellow Party member and Supreme Soviet Chairman Leonid Kravchuk,[4] felt compelled to support the act in order to distance themselves from the coup.[3] CPU First Secretary Stanislav Hurenko argued that "it will be a disaster" if the CPU didn't support independence.[3] CPU members had been unnerved by the news of former party leader Vladimir Ivashko's arrest in Moscow, the re-subordination of the Soviet Army under the leaders of the Russian SFSR and the sealing of the Communist Party Central Committee's premises.[4] 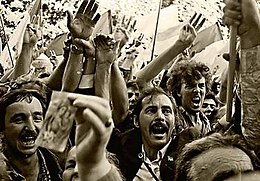 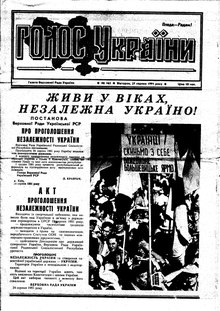 The same day (24 August), the parliament called for a referendum on support for the Declaration of Independence.[1][3] The proposal for calling the national referendum came jointly from opposition leaders Ihor Yukhnovsky and Dmytro Pavlychko.[3] The Parliament also voted for the creation of a national guard of Ukraine and turned jurisdiction over all the armed forces located on Ukrainian territory over to itself.[3]

Other than a noisy crowd that had gathered at the Parliament building, the streets of Kiev were quiet that day, with few signs of open celebration.[3]

In the days that followed a number of resolutions and decrees were passed: nationalizing all CPU property and handing it over to the Supreme Soviet and local councils; issuing an amnesty for all political prisoners; suspending all CPU activities and freezing CPU assets and bank accounts pending official investigations into possible collaboration with the Moscow coup plotters; setting up a committee of inquiry into official behavior during the coup; and establishing a committee on military matters related to the creation of a Ministry of Defense of Ukraine.[3]

On 26 August 1991 the Permanent Representative of the Ukrainian SSR to the United Nations (the Ukrainian SSR was a founding member of the United Nations[5]) Hennadiy Udovenko informed the office of the Secretary General of the United Nations that his permanent mission to this international assembly would officially be designated as representing Ukraine.[5][6] That same day, the executive committee of Kiev also voted to remove all the monuments of Communist heroes from public places, including the Lenin monument on the central October Revolution Square.[3] The large square would be renamed Maidan Nezalezhnosti (Independence Square) as would the central Metro station below it, the executive committee decided.[3]

Two days later, more than 200,000 Lviv and Lviv oblast residents declared their readiness to serve in the national guard.[7]

In the independence referendum on 1 December 1991, the people of Ukraine expressed widespread support for the Act of Declaration of Independence, with more than 90% voting in favor, and 82% of the electorate participating.[1] The referendum took place on the same day as Ukraine's first direct presidential election; all six presidential candidates supported independence and campaigned for a "yes" vote. The referendum's passage ended any realistic chance of the Soviet Union staying together even on a limited scale; Ukraine had long been second only to Russia in economic and political power.

A week after the election, newly elected president Leonid Kravchuk joined his Russian and Belarusian counterparts in signing the Belavezha Accords, which declared that the Soviet Union had ceased to exist.[8] The Soviet Union officially dissolved on 26 December.[9]

Since 1992, the 24th of August is celebrated in Ukraine as Independence Day.[10]

(Text of) Act of Independence

Act of Declaration of Independence of Ukraine

the Verkhovna Rada of the Ukrainian Soviet Socialist Republic solemnly declares
the Independence of Ukraine and the creation of an independent Ukrainian state – UKRAINE.

The territory of Ukraine is indivisible and inviolable.

From this day forward, only the Constitution and laws of Ukraine are valid on the territory of Ukraine.

This act becomes effective at the moment of its approval.