Octal Duodecimal Numeral system
Numeral system with ten as its base
For other uses, see Decimal (disambiguation).

The numbers that may be represented in the decimal system are the decimal fractions. That is, fractions of the form a/10n, where a is an integer, and n is a non-negative integer.

Many numeral systems of ancient civilizations use ten and its powers for representing numbers, possibly because there are ten fingers on two hands and people started counting by using their fingers. Examples are Brahmi numerals, Greek numerals, Hebrew numerals, Roman numerals, and Chinese numerals. Very large numbers were difficult to represent in these old numeral systems, and only the best mathematicians were able to multiply or divide large numbers. These difficulties were completely solved with the introduction of the Hindu–Arabic numeral system for representing integers. This system has been extended to represent some non-integer numbers, called decimal fractions or decimal numbers, for forming the decimal numeral system.

For representing a non-negative number, a decimal consists of

(in this case, the (entire) decimal represents an integer)

For representing a negative number, a minus sign is placed before am.

When the integral part of a numeral is zero, it may occur, typically in computing, that the integer part is not written (for example .1234, instead of 0.1234). In normal writing, this is generally avoided, because of the risk of confusion between the decimal mark and other punctuation.

In brief, the contribution of each digit to the value of a number depends on its position in the numeral. That is, the decimal system is a positional numeral system.

The numbers that are represented by decimal numerals are the decimal fractions (sometimes called decimal numbers), that is, the rational numbers that may be expressed as a fraction whose denominator is a power of ten.[8] For example, the numerals

Decimal numerals do not allow an exact representation for all real numbers, e.g. for the real number π. Nevertheless, they allow approximating every real number with any desired accuracy, e.g., the decimal 3.14159 approximates the real π, being less than 10−5 off; and so decimals are widely used in science, engineering and everyday life.

More precisely, for every real number x, and every positive integer n, there are two decimals L and u, with at most n digits after the decimal mark, such that L ≤ x ≤ u and (u – L) = 10−n.

Numbers are very often obtained as the result of a measurement. As measurements are generally afflicted with some measurement error with a known upper bound, the result of a measurement is well represented by a decimal with n digits after the decimal mark, as soon as the absolute measurement error is bounded from above by 10−n. In practice, measurement results are often given with a certain number of digits after the decimal point, which indicate the error bounds. For example, although 0.080 and 0.08 denote the same decimal number, the numeral 0.080 suggests a measurement with an error less than 0.001, while the numeral 0.08 indicates an absolute error bounded by 0.01. In both cases, the true value of the measured quantity could be, for example, 0.0803 or 0.0796 (see also significant figures).

For a real number x and an integer n ≥ 0, let [x]n denote the (finite) decimal expansion of the greatest number that is not greater than x, which has exactly n digits after the decimal mark. Let di denote the last digit of [x]i. It is straightforward to see that [x]n may be obtained by appending dn to the right of [x]n–1. This way one has

which is called an infinite decimal expansion of x.

Conversely, for any integer [x]0 and any sequence of digits

Long division allows computing the infinite decimal expansion of a rational number. If the rational number is a decimal fraction, the division stops eventually, producing a decimal numeral, which may be prolongated into an infinite expansion by adding infinitely many zeros. If the rational number is not a decimal fraction, the division may continue indefinitely. However, as all successive remainders are less than the divisor, there are only a finite number of possible remainders, and after some place, the same sequence of digits must be repeated indefinitely in the quotient. That is, one has a repeating decimal. For example,

For most purposes, however, binary values are converted to or from the equivalent decimal values for presentation to or input from humans; computer programs express literals in decimal by default. (123.1, for example, is written as such in a computer program, even though many computer languages are unable to encode that number precisely.)

Both computer hardware and software also use internal representations which are effectively decimal for storing decimal values and doing arithmetic. Often this arithmetic is done on data which are encoded using some variant of binary-coded decimal,[10][11] especially in database implementations, but there are other decimal representations in use (including decimal floating point such as in newer revisions of the IEEE 754 Standard for Floating-Point Arithmetic).[12]

Decimal arithmetic is used in computers so that decimal fractional results of adding (or subtracting) values with a fixed length of their fractional part always are computed to this same length of precision. This is especially important for financial calculations, e.g., requiring in their results integer multiples of the smallest currency unit for book keeping purposes. This is not possible in binary, because the negative powers of

have no finite binary fractional representation; and is generally impossible for multiplication (or division).[13][14] See Arbitrary-precision arithmetic for exact calculations. 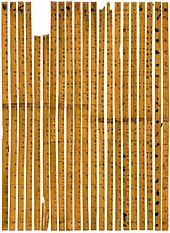 The world's earliest decimal multiplication table was made from bamboo slips, dating from 305 BCE, during the Warring States period in China.

Many ancient cultures calculated with numerals based on ten, sometimes argued due to human hands typically having ten digits.[15] Standardized weights used in the Indus Valley Civilization (c. 3300–1300 BCE) were based on the ratios: 1/20, 1/10, 1/5, 1/2, 1, 2, 5, 10, 20, 50, 100, 200, and 500, while their standardized ruler – the Mohenjo-daro ruler – was divided into ten equal parts.[16][17][18] Egyptian hieroglyphs, in evidence since around 3000 BCE, used a purely decimal system,[19] as did the Cretan hieroglyphs (c. 1625−1500 BCE) of the Minoans whose numerals are closely based on the Egyptian model.[20][21] The decimal system was handed down to the consecutive Bronze Age cultures of Greece, including Linear A (c. 18th century BCE−1450 BCE) and Linear B (c. 1375−1200 BCE) – the number system of classical Greece also used powers of ten, including, Roman numerals, an intermediate base of 5.[22] Notably, the polymath Archimedes (c. 287–212 BCE) invented a decimal positional system in his Sand Reckoner which was based on 108[22] and later led the German mathematician Carl Friedrich Gauss to lament what heights science would have already reached in his days if Archimedes had fully realized the potential of his ingenious discovery.[23] Hittite hieroglyphs (since 15th century BCE) were also.strictly decimal.[24]

Some non-mathematical ancient texts like the Vedas, dating back to 1900–1700 BCE make use of decimals and mathematical decimal fractions.[25]

J. Lennart Berggren notes that positional decimal fractions appear for the first time in a book by the Arab mathematician Abu'l-Hasan al-Uqlidisi written in the 10th century.[31] The Jewish mathematician Immanuel Bonfils used decimal fractions around 1350, anticipating Simon Stevin, but did not develop any notation to represent them.[32] The Persian mathematician Jamshīd al-Kāshī claimed to have discovered decimal fractions himself in the 15th century.[31] Al Khwarizmi introduced fraction to Islamic countries in the early 9th century; a Chinese author has alleged that his fraction presentation was an exact copy of traditional Chinese mathematical fraction from Sunzi Suanjing.[27] This form of fraction with numerator on top and denominator at bottom without a horizontal bar was also used by al-Uqlidisi and by al-Kāshī in his work "Arithmetic Key".[27][33]

A forerunner of modern European decimal notation was introduced by Simon Stevin in the 16th century.[34]

A method of expressing every possible natural number using a set of ten symbols emerged in India. Several Indian languages show a straightforward decimal system. Many Indo-Aryan and Dravidian languages have numbers between 10 and 20 expressed in a regular pattern of addition to 10.[35]

The Hungarian language also uses a straightforward decimal system. All numbers between 10 and 20 are formed regularly (e.g. 11 is expressed as "tizenegy" literally "one on ten"), as with those between 20 and 100 (23 as "huszonhárom" = "three on twenty").

Incan languages such as Quechua and Aymara have an almost straightforward decimal system, in which 11 is expressed as ten with one and 23 as two-ten with three.

Some psychologists suggest irregularities of the English names of numerals may hinder children's counting ability.[36]

Some cultures do, or did, use other bases of numbers.