Case fatality rate List of causes of death by rate Infant mortality
Measure of the number of deaths in a population from a given cause, scaled by population, in a set period of time
Not to be confused with case fatality rate.

Colour-coded map of the crude death rates of countries, globally, based on WHO data for 2000–2005, presented per thousand persons in the population, per year.[1][2][verification needed]

Mortality rate, or death rate,[3]:189,69 is a measure of the number of deaths (in general, or due to a specific cause) in a particular population, scaled to the size of that population, per unit of time. Mortality rate is typically expressed in units of deaths per 1,000 individuals per year; thus, a mortality rate of 9.5 (out of 1,000) in a population of 1,000 would mean 9.5 deaths per year in that entire population, or 0.95% out of the total. It is distinct from "morbidity", which is either the prevalence or incidence of a disease, and also from the incidence rate (the number of newly appearing cases of the disease per unit of time).[3]:189[verification needed]

is the conversion factor from the resulting fraction to another unit (e.g., multiplying by

According to the World Health Organization, the ten leading causes of death, globally, in 2016, for both sexes and all ages, were as presented in the table below.[6]

Other specific measures of mortality include:[5]

For any of these, a "sex-specific mortality rate" refers to "a mortality rate among either males or females", where the calculation involves both "numerator and denominator... limited to the one sex".[5]:3–23

In most cases there are few if any ways to obtain exact mortality rates, so epidemiologists use estimation to predict correct mortality rates. Mortality rates are usually difficult to predict due to language barriers, health infrastructure related issues, conflict, and other reasons. Maternal mortality has additional challenges, especially as they pertain to stillbirths, abortions, and multiple births. In some countries, during the 1920s, a stillbirth was defined as "a birth of at least twenty weeks' gestation in which the child shows no evidence of life after complete birth". In most countries, however, a stillbirth was defined as "the birth of a fetus, after 28 weeks of pregnancy, in which pulmonary respiration does not occur".[13]

Ideally, all mortality estimation would be done using vital statistics and census data. Census data will give detailed information about the population at risk of death. The vital statistics provide information about live births and deaths in the population.[14] Often, either census data and vital statistics data is not available. This is especially true in developing countries, countries that are in conflict, areas where natural disasters have caused mass displacement, and other areas where there is a humanitarian crisis [14]

Household surveys or interviews are another way in which mortality rates are often assessed. There are several methods to estimate mortality in different segments of the population. One such example is the sisterhood method, which involves researchers estimating maternal mortality by contacting women in populations of interest and asking whether or not they have a sister, if the sister is of child-bearing age (usually 15) and conducting an interview or written questions about possible deaths among sisters. The sisterhood method, however, does not work in cases where sisters may have died before the sister being interviewed was born.[15]

Orphanhood surveys estimate mortality by questioning children are asked about the mortality of their parents. It has often been criticized as an adult mortality rate that is very biased for several reasons. The adoption effect is one such instance in which orphans often do not realize that they are adopted. Additionally, interviewers may not realize that an adoptive or foster parent is not the child's biological parent. There is also the issue of parents being reported on by multiple children while some adults have no children, thus are not counted in mortality estimates.[14]

Widowhood surveys estimate adult mortality by responding to questions about the deceased husband or wife. One limitation of the widowhood survey surrounds the issues of divorce, where people may be more likely to report that they are widowed in places where there is the great social stigma around being a divorcee. Another limitation is that multiple marriages introduce biased estimates, so individuals are often asked about first marriage. Biases will be significant if the association of death between spouses, such as those in countries with large AIDS epidemics.[14]

The ten countries with the highest crude death rate, according to the 2017 CIA World Factbook estimates, are:[18] 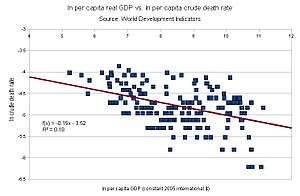 According to Jean Ziegler (the United Nations Special Rapporteur on the Right to Food for 2000 to March 2008), mortality due to malnutrition accounted for 58% of the total mortality in 2006: "In the world, approximately 62 million people, all causes of death combined, die each year. In 2006, more than 36 million died of hunger or diseases due to deficiencies in micronutrients".[19]

Scholars have stated that there is a significant relationship between a low standard of living that results from low income; and increased mortality rates. A low standard of living is more likely to result in malnutrition, which can make people more susceptible to disease and more likely to die from these diseases. A lower standard of living may lead to as a lack of hygiene and sanitation, increased exposure to and the spread of disease, and a lack of access to proper medical care and facilities. Poor health can in turn contribute to low and reduced incomes, which can create a loop known as the health-poverty trap.[24] Indian economist and philosopher Amartya Sen has stated that mortality rates can serve as an indicator of economic success and failure.[25][26]:27, 32

Historically, mortality rates have been adversely affected by short term price increases. Studies have shown that mortality rates increase at a rate concurrent with increases in food prices. These effects have a greater impact on vulnerable, lower-income populations than they do on populations with a higher standard of living.[26]:35–36, 70

These rates are especially pronounced for children under 5 years old, particularly in lower-income, developing countries. These children have a much greater chance of dying of diseases that have become very preventable in higher-income parts of the world. More children die of malaria, respiratory infections, diarrhea, perinatal conditions, and measles in developing nations. Data shows that after the age of 5 these preventable causes level out between high and low-income countries.