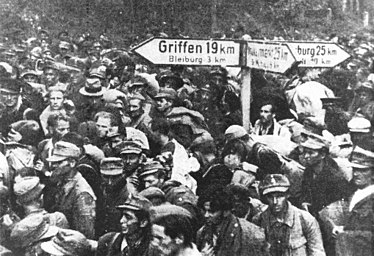 A death march is a forced march of prisoners of war or other captives or deportees in which individuals are left to die along the way.[1] It is distinguished in this way from simple prisoner transport via foot march. Article 19 of the Geneva Convention requires that prisoners must be moved away from a danger zone such as an advancing front line, to a place that may be considered more secure. It is not required to evacuate prisoners that are too sick or injured to move. In times of war such evacuations are not carried out without difficulty.

Death marches usually feature harsh physical labor and abuse, neglect of prisoner injury and illness, deliberate starvation and dehydration, humiliation and torture, and execution of those unable to keep up the marching pace. The march may end at a prisoner-of-war camp or internment camp, or it may continue until all the prisoners are dead (a form of "execution by labor", as seen in the Armenian genocide, among other examples).

General Masaharu Homma was charged with failure to control his troops in 1945 in connection with the Bataan Death March.[2][3]

Arab-Swahili slave traders and their captives on the Ruvuma River

Long Walk of the Navajo

The abandonment of the village by mountaineers as Russian troops approached during the forced deportation and ethnic cleansing of the Circassians. 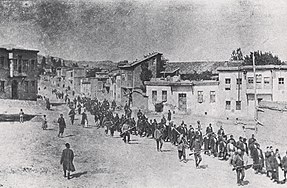 Armenian people are marched to a nearby prison in Mezireh by armed Ottoman soldiers during the Armenian Genocide. Kharpert, Ottoman Empire, April 1915.

We passed a slave woman shot or stabbed through the body and lying on the path. [Onlookers] said an Arab who passed early that morning had done it in anger at losing the price he had given for her, because she was unable to walk any longer.[6] 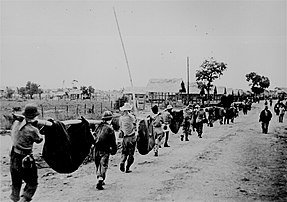 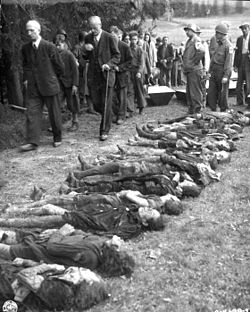 May 11, 1945, German civilians are forced to walk past the bodies of 30 Jewish women murdered by German SS troops in a 500-kilometre (300 mi) death march from Helmbrecht to Volary. 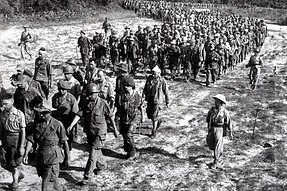