Yugoslav Wars Franjo Tuđman List of members of the Presidency of Bosnia and Herzegovina
"Dayton Treaty" redirects here. For the Native American treaty, see Treaty with the Kalapuya, etc.

The General Framework Agreement for Peace in Bosnia and Herzegovina, also known as the Dayton Agreement or the Dayton Accords, (Serbo-Croatian: Dejtonski mirovni sporazum / Дејтонски мировни споразум) is the peace agreement reached at Wright-Patterson Air Force Base near Dayton, Ohio, United States, on 1 November 1995, and formally signed in Paris, on 14 December 1995. These accords put an end to the ​3 1⁄2-year-long Bosnian War, one of the Yugoslav Wars. 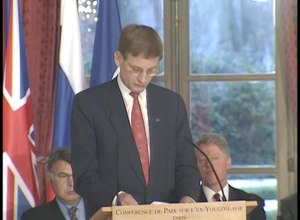 Play media
Video of the signing of the Dayton Agreement

Though basic elements of the Dayton Agreement were proposed in international talks as early as 1992,[2] these negotiations were initiated following the unsuccessful previous peace efforts and arrangements, the August 1995 Croatian military Operation Storm and its aftermath, the government military offensive against the Republika Srpska, conducted in parallel with NATO's Operation Deliberate Force. During September and October 1995, world powers (especially the United States and Russia), gathered in the Contact Group, applied intense pressure to the leaders of the three sides to attend the negotiations in Dayton, Ohio.

The conference took place from 1–21 November 1995. The main participants from the region were the President of the Republic of Serbia Slobodan Milošević (representing the Bosnian Serb interests due to the absence of Karadžić), President of Croatia Franjo Tuđman, and President of Bosnia and Herzegovina Alija Izetbegović with his Foreign Minister Muhamed Šaćirbeg.

The peace conference was led by US Secretary of State Warren Christopher, and negotiator Richard Holbrooke with two Co-Chairmen in the form of EU Special Representative Carl Bildt and the First Deputy Foreign Minister of Russia Igor Ivanov. A key participant in the US delegation was General Wesley Clark. The head of the UK's team was Pauline Neville-Jones, political director of the Foreign and Commonwealth Office. The UK military representative was Col Arundell David Leakey. Paul Williams, through the Public International Law & Policy Group (PILPG) served as legal counsel to the Bosnian Government delegation during the negotiations.

The secure site was chosen in order to remove all the parties from their comfort zone, without which they would have little incentive to negotiate; to reduce their ability to negotiate through the media; and to securely house over 800 staff and attendants. Curbing the participants' ability to negotiate via the media was a particularly important consideration. Richard Holbrooke wanted to prevent posturing through early leaks to the press. Holbrooke used a great variety of carrots and sticks to make the conflict 'ripe' for peace.[3]

The signing of the full and formal agreement in Paris.

The agreement's main purpose is to promote peace and stability in Bosnia and Herzegovina and to endorse regional balance in and around the former Yugoslavia (Article V, annex 1-B), thus in a regional perspective.[5]

The present political divisions of Bosnia and Herzegovina and its structure of government were agreed upon, as part the constitution that makes up Annex 4 of the General Framework Agreement concluded at Dayton. A key component of this was the delineation of the Inter-Entity Boundary Line to which many of the tasks listed in the Annexes referred.[6]

The State of Bosnia Herzegovina was set as of the Federation of Bosnia-Herzegovina and of the Republika Srpska. Bosnia and Herzegovina is a complete state, as opposed to a confederation; no entity or entities could ever be separated from Bosnia and Herzegovina unless by due legal process. Although highly decentralised in its entities, it would still retain a central government, with a rotating State Presidency, a central bank and a constitutional court.[5] [7]

The agreement mandated a wide range of international organizations to monitor, oversee and implement components of the agreement. The NATO-led IFOR (Implementation Force) was responsible for implementing military aspects of the agreement and deployed on 20 December 1995, taking over the forces of the UNPROFOR. The Office of the High Representative was charged with the task of civil implementation. The Organization for Security and Co-operation in Europe was charged with organising the first free elections in 1996.[5]

It was one of the early cases in which the Court had to deal with the question of the legal nature of the Constitution. By making the remark in the manner of obiter dictum concerning the Annex IV (the Constitution) and the rest of the peace agreement, the Court actually "established the ground for legal unity"[9] of the entire peace agreement, which further implied that all of the annexes are in the hierarchical equality. In later decisions the Court confirmed that by using other annexes of the peace agreement as a direct base for the analysis, not only in the context of systematic interpretation of the Annex IV. However, since the Court rejected the presented request of the appellants, it did not go into details concerning the controversial questions of the legality of the process in which the new Constitution (Annex IV) came to power and replaced the former Constitution of the Republic of Bosnia and Herzegovina. The Court used the same reasoning to dismiss the similar claim in a later case.[10] 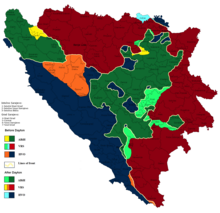 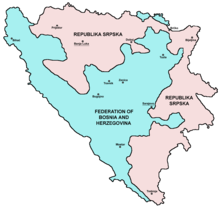 Political division of Bosnia and Herzegovina after the Dayton Agreement.

Bosnian Serbs got large tracts of mountainous territories back (4% from Bosnian Croats and some small amounts from Bosniaks), but they had to surrender Sarajevo and some vital Eastern Bosnian/Herzegovian positions. Their percentage grew to 49% (48% by excluding the Brčko District, 24,526 km2).

Bosniaks got most of Sarajevo and some important positions in eastern Bosnia and Herzegovina while they lost only a few locations on Mount Ozren and in western Bosnia. Their percentage grew to 30%, and they greatly improved the quality of the land. Large tracts of prewar Bosniak (and Bosnian Croat) inhabited lands remained under Bosnian Serb control.[citation needed]

Bosnian Croats gave most (4% of BiH territories) back to the Bosnian Serbs (9% of today's RS) and also retreated from Una-Sana Donji Vakuf (in Central Bosnia) afterward. A small enlargement of Posavina (Odžak and parts of Domaljevac) did not change the fact that after Dayton Bosnian Croats controlled just 21% of Bosnia and Herzegovina (10,640 km2), compared to more than 25% prior to Dayton. One of the most important Bosnian Croat territories (Posavina with Bosanski Brod, Bosanski Šamac, Derventa) was left out of Bosnian Croat control.[5]

Control of Federation of Bosnia and Herzegovina

Main article: Cantons of the Federation of Bosnia and Herzegovina

The immediate purpose of the agreement was to freeze the military confrontation and prevent it from resuming. It was therefore defined as a "construction of necessity".[11]

The Dayton Agreement was aimed at allowing Bosnia and Herzegovina to move from an early post-conflict phase through reconstruction and consolidation, adopting a consociational power-sharing approach.[12][13] Scholars such as Canadian professor Charles-Philippe David calls Dayton "the most impressive example of conflict resolution".[14][15] American scholar Howard M. Hensel states that "Dayton represents an example of a conflict resolution negotiation that was successful.[16] However, Patrice C. McMahon and Jon Western write that "As successful as Dayton was at ending the violence, it also sowed the seeds of instability by creating a decentralized political system that undermined the state's authority".[17]

Wolfgang Petritsch, OHR, argued in 2006 that the Dayton framework has allowed the international community to move "from statebuilding via institutions and capacity-building to identity building", putting Bosnia and Herzegovina "on the road to Brussels".[18]

The Dayton Agreement has been the subject of criticism since its inception, including:

Disappearance of the original document

On 13 February 2008, the head of the Presidency of Bosnia-Herzegovina Željko Komšić said that the original Dayton Agreement was lost from the Presidency's archive. High Representative for Bosnia-Herzegovina Miroslav Lajčak said: "I don't know whether the news is sad or funny".[23] On 16 November 2009 the French Foreign Ministry delivered the certified copy of the Dayton agreement to the French embassy in Sarajevo. The copy was later transferred to the Ministry of Foreign Affairs of Bosnia-Herzegovina.[24] The original was found in 2017 in a private residence in Pale, resulting in the arrest of one person.[25]