Riga Latvia Russia
river in Europe
Not to be confused with Northern Dvina.
For other uses, see Daugava (disambiguation) and Dvina.

The Daugava (Latgalian: Daugova; Russian: Западная Двина (Západnaya Dviná), meaning "Western Dvina"; Polish: Dźwina), is a river rising in the Valdai Hills, flowing through Russia, Belarus, and Latvia and into the Gulf of Riga. The total length of the river is 1,020 km (630 mi),[1] of which 325 km (202 mi) are in Russia.

The following rivers are tributaries to the river Daugava (from source to mouth):

Daugava flowing through Riga in Latvia

According to Max Vasmer's Etymological Dictionary, the toponym Dvina clearly cannot stem from a Uralic language, and it possibly comes from an Indo-European word which used to mean river or stream.[2] 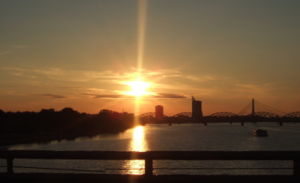 The Swedish army bombarding the fortress of Daugavgriva at the Daugava's estuary in Latvia.

Humans have settled at the mouth of the Daugava and around the other shores of the Gulf of Riga for millennia, initially participating in a hunter-gatherer economy and utilizing the waters of the Daugava estuary as fishing and gathering areas for aquatic biota. Beginning around the sixth century AD, Viking explorers crossed the Baltic Sea and entered the Daugava River, navigating upriver into the Baltic interior.[4]

In medieval times the Daugava was an important area of trading and navigation - part of the trade route from the Varangians to the Greeks - for transport of furs from the north and of Byzantine silver from the south. The Riga area, inhabited by the Finnic-speaking Livs, became a key element of settlement and defence of the mouth of the Daugava at least as early as the Middle Ages, as evidenced by the now destroyed fort at Torņakalns on the west bank of the Daugava at present day Riga. Since the Late Middle Ages the western part of the Daugava basin has come under the rule of various peoples and states; for example the Latvian town of Daugavpils, located on the western Daugava, variously came under papal rule as well as Slavonic, Polish, German and Russian sway until restoration of the Latvian independence in 1990 at the end of the Cold War.[citation needed]

Upstream of the Latvian town of Jekabpils the pH has a characteristic value of about 7.8 (slight alkaline); in this reach the calcium ion has a typical concentration of around 43 milligrams per liter; nitrate has a concentration of about 0.82 milligrams per liter (as nitrogen); phosphate ion is measured at 0.038 milligrams per liter; and oxygen saturation was measured at eighty percent. The high nitrate and phosphate load of the Daugava is instrumental to the buildup of extensive phytoplankton biomass in the Baltic Sea; other European rivers contributing to such high nutrient loading of the Baltic are the Oder and Vistula Rivers.[citation needed]

In Belarus, water pollution of the Daugava is considered moderately severe, with the chief sources being treated wastewater, fish-farming and agricultural chemical runoff (e.g. herbicides, pesticides, nitrate and phosphate).[citation needed]