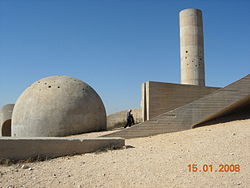 Monument to the Negev Brigade, Beersheva

Daniel (Dani) Karavan was born in Tel Aviv. His father Abraham was the chief landscape architect of Tel Aviv from the 1940s to the 1960s.[1]

At the age of 13, he began studying painting. In 1943, he studied with Marcel Janco in Tel Aviv and from 1943-49 at the Bezalel School of Art in Jerusalem. After living on a kibbutz from 1948–55, he returned to art. From 1956-57, he studied fresco technique at the Accademia delle Belle Arti in Florence and drawing at the Académie de la Grande Chaumière in Paris.[1]

Karavan made permanent installations in the form of wall reliefs in Israeli courts and research institutions.[1] Examples of his artwork for courts are the 1966 Jerusalem City of Peace wall relief in the Knesset assembly hall and the environmental sculptures comprising 35 wall reliefs & iron sculpture made between 1962 and 1967 at the Court of Justice in Tel Aviv. For the Weizmann Institute of Science he made the From the Tree of Knowledge to the Tree of Life wall relief in 1964 and the Memorial to the Holocaust in 1972.

For performance groups he designed stage sets throughout the 1960s and 1970s. These included the Martha Graham Dance Company,[2] the Batsheva Dance Company, and the Israel Chamber Orchestra among others. After representing Israel with his Jerusalem City of Peace sculpture at the 1976 Venice Biennale, he obtained more international commissions - including sculptures in France, Germany, Japan, South Korea, Spain, and Switzerland.[1] One such project was a memorial entitled Passages for Walter Benjamin constructed between 1990 and 1994 in Portbou at the Spanish-French border in Catalonia where Walter Benjamin died in September 1940.[citation needed]

Karavan's advocacy of Tel Aviv's modern international style buildings encouraged their restoration and the inscription of The White City as a UNESCO World Heritage Site. Along with an exhibition about the city's architecture at the Tel Aviv Museum of Art in the mid-1980s, Karavan convinced mayor Shlomo Lahat to form a jury of international architecture and art critics to review these buildings. The value they placed on the city's town planning and design led to conservation in the 1990s and acceptance by UNESCO in 2003.[3]

In February 2016 Karavan got commissioned by Sigmund Rolat, the founder the organization Remembrance and Future Foundation, to design the controversial monument From Those You Saved in Warsaw to commemorate Polish righteous gentiles who saved Jews during the Holocaust. Prior to commissioning Karavan, Rolat had denounced the design by Austrian architect Gabu Heindl and artist Eduard Freudmann which had won the preceding controversial monument competition.[4] Karavan initially declined the commission[5] after he had read an article written by Freudmann and Heindl, in which they criticize the foundation and their course of action.[6] In April 2016 Karavan announced that he accepted the commission to build the monument,[7] thereby sparking another furor. To this day the monument for the Polish righteous gentiles has not been built.

A memorial created by Dani Karavan in 2005, depicting the foundation of the Regensburg Synagogue that was destroyed during a pogrom in 1519. The inscription 'מזרח' in Hebrew is 'east' in English.