The DND Flyway or Delhi–Noida Direct Flyway is an eight-laned 9.2 km (5.7 mi) long [1] access controlled expressway which connects Delhi to Noida, an important part of NCR. It connects Maharani Bagh & Nizamuddin on western side to Noida and Mayur Vihar on the eastern side of the Yamuna river. The Noida Toll Bridge Company Limited (NTBCL), promoted by IL&FS operate and maintains it on build-own-operate-transfer (BOOT) basis. The expressway, which was opened to public in 2001 was constructed by Mitsui-Marubeni Corporation Limited.

DND Flyway grew out of a need to bridge the growing population of Delhi with its neighboring places across the Yamuna river. A major portion of Delhi's population lives in the Trans-Yamuna area and there was a need to build a major connecting facility between the areas growing on both sides of the Yamuna. The project was the precursor to the National Highway Development Project and was approved by the Asian Development Bank, World Bank, Government of India & Government of UP. The EPC contract was based on the World Bank's international competitive procedure. An MoU was signed in 1992 between Government of Delhi, NOIDA Authority and IL&FS, led by Ministry of Urban Development (now MoHUA). But till 1996, nothing happened on the project.[2]

In April 1996, a special purpose entity (SPE) called Noida Toll Bridge Company Limited (NTBCL) was incorporated for this job, which is also the first 'Toll company' to be listed in National Stock Exchange of India (NSE). The concession agreement was made for 30 years i.e. from 2001 to 2031. Pradeep Puri, a retired IAS officer is the present Vice-Chairman of NTBCL who was its President & CEO from 1997 to 2010. As of 2018, around 73% share of the company is owned by the public.

The project included the construction of a flyover at Ashram Chowk which was handed over to the Delhi Public Works Department (PWD) for maintenance.[3] The 552.5 meter Main bridge and three minor bridges over the Yamuna river was constructed at a cost of ₹4.08 billion (US$57.2 million), whose construction was started on 01 January 1999. DND Flyway was inaugurated four months ahead of schedule on 24 January 2001 by the then Chief Minister of Uttar Pradesh Rajnath Singh in presence of then Lt. Governor of Delhi Vijai Kapoor & the then Chief Minister of Delhi Sheila Dixit.[4][5][6] The commercial service for public was started in first week of February 2001. NTBCL in 2006, started the construction of an extension to link 'Mayur Vihar' with DND Flyway which was opened to traffic on 19 January 2008.[7]

The DND Flyway was constructed by Mitsui Marubeni Corporation Limited, a Japanese consortium between Mitsui & Co. Ltd. and Marubeni Corporation.[8] It has grade separated Trumpet interchange on Delhi end and Cloverleaf interchange on Noida end which is further connected to the Noida–Greater Noida Expressway. Denmark based Kampsax International was tasked with surveying, mapping & providing geographic information for the project.

The Allahabad High Court had on 26 October 2016, ordered that no toll would be collected from the commuters on the DND Flyway. Later the Supreme Court of India on 13 July 2018, maintained that no tax will be levied on for now. The court was hearing a plea filed by the NTBCL against an Allahabad HC order. 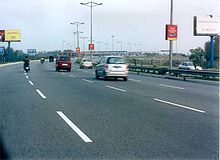 The following table lists the exits in Noida and Delhi.