Haditha Dam, Iraq, (September 16, 2007) – A Riverine Patrol Boat with Riverine Squadron 1, Riverine Group 1, Navy Expeditionary Combat Command, in support of Regimental Combat Team 2, tows several boats the riverines seized in support of the new 24-hour curfew enforcement of the waterway near the dam. The riverines warned locals of the new curfew for several days before seizing the boats of repeat curfew offenders

A curfew is an order specifying a time during which certain regulations apply.[1][2] Typically it refers to the time when individuals are required to return to and stay in their houses or homes. Such an order may be issued by public authorities but also by the owner of a house to those living in the household. For instance, an au pair is typically given a curfew, which regulates when they must return to the host family's home in the evening.

Curfews are a common element of control used in martial law, though curfews can also be implemented for public safety in the event of a disaster or crisis.[3]

The word "curfew" comes from the Old French phrase "couvre-feu", which means "cover fire". It was later adopted into Middle English as "curfeu", which later became the modern "curfew".[4] Its original meaning refers to a law made by William the Conqueror that all lights and fires should be covered at the ringing of an eight o'clock bell to prevent the spread of destructive fire within communities in timber buildings.[5]

The first formal "curfew order" was introduced in 1918 by the British board of trade, which ordered shops and entertainment establishments to extinguish their lights by 10:30 p.m. in order to save fuel during World War I [6] 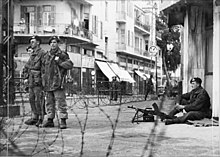 Movement and curfew pass, issued under the authority of the British Military Commander, East Palestine, 1946

On 2 August 2020, following the surge of COVID-19 cases in Victoria, especially in Melbourne, Victorian premier Daniel Andrews declares a state of disaster across the state and imposed stage 4 lockdown in Metropolitan Melbourne. The new measures include nighttime curfew, which implemented across Melbourne from 20:00 to 05:00 (AEST). The restrictions comes into effect at 18:00 (6 pm) and last until 13 September 2020.[8]

On 28 January 2011, and following the collapse of the police system, President Hosni Mubarak declared a country-wide military enforced curfew.[9] However, it was ignored by demonstrators who continued their sit-in in Tahrir Square. Concerned residents formed neighborhood vigilante groups to defend their communities against looters and the newly escaped prisoners.[10]

On the second anniversary of the revolution, January 2013, a wave of demonstrations swept the country against President Mohamed Morsi who declared a curfew in Port Said, Ismaïlia, and Suez, three cities where deadly street clashes had occurred. In defiance, the locals took to the streets during the curfew,[11] organizing football tournaments and street festivals,[12] prohibiting police and military forces from enforcing the curfew.

Children and teenagers that break curfew are taken to the local police station and police officers inform their parents to get them. The age limits stated here shall be based upon year of birth, not date of birth. If a parent cannot be reached, the child or teenager is taken to a shelter.

In Sri Lanka, the Sri Lanka Police are empowered to declare and enforce a Police Curfew in any police area for any particular period to maintain the peace, law and order under the Police Ordinance. Under the emergency regulations of the Public Security Ordinance, the President may declare a curfew over the whole or over any part of the country. Travel is restricted, during a curfew, to authorised persons such as police, armed forces personal and public officers. Civilians may gain a Curfew Pass from a police station to travel during a curfew.

The United Kingdom's 2003 Anti-Social Behaviour Act created zones that allow police from 9 PM to 6 AM to hold and escort home unaccompanied minors under the age of 16, whether badly behaved or not. Although hailed as a success,[14] the High Court ruled in one particular case that the law did not give the police a power of arrest, and officers could not force someone to come with them. On appeal the court of appeal held that the act gave police powers to escort minors home only if they are involved in, or at risk from, actual or imminently anticipated bad behaviour.[15]

In a few towns in the United Kingdom, the curfew bell is still rung as a continuation of the medieval tradition where the bell used to be rung from the parish church to guide travelers safely towards a town or village as darkness fell, or when bad weather made it difficult to follow trackways and for the villagers to extinguish their lights and fires as a safety measure to combat accidental fires. Until 1100 it was against the law to burn any lights after the ringing of the curfew bell. In Morpeth, the curfew is rung each night at 8pm from Morpeth Clock Tower. In Chertsey, it is rung at 8pm, from Michaelmas to Lady Day.[16] A short story concerning the Chertsey curfew, set in 1471, and entitled "Blanche Heriot. A legend of old Chertsey Church" was published by Albert Richard Smith in 1843, and formed a basis for the poem "Curfew Must Not Ring Tonight". At Castleton in the Peak District, the curfew is rung from Michaelmas to Shrove Tuesday.[17] At Wallingford in Oxfordshire, the curfew bell continues to be rung at 9pm rather than 8pm which is a one-hour extension granted by William The Conqueror as the Lord of the town was a Norman sympathiser. However, none of these curfew bells serves its original function.

Curfew law in the United States is usually a matter of local ordinance (mainly applied by a municipality or county), rather than federal law. However, the Constitution guarantees certain rights, which have been applied to the states through the 14th Amendment. Hence, any curfew law may be overruled and struck down if, for example, it violates a juvenile's 1st, 4th, 5th or 14th Amendment rights. Nonetheless, curfews are set by state and local governments. They vary by state[18] and even by county or municipality. In some cities, there are curfews for persons under the age of 18. American military curfews are a tool used by commanders at various installations to shape the behavior of soldiers.[19]

The stated purpose of such laws is generally to deter disorderly behavior and crime, while others can include to protect youth from victimization and to strengthen parental responsibility,[20] but their effectiveness is subject to debate. Generally, curfews attempt to address vandalism, shootings, and property crimes, which are believed to happen mostly at night, but are less commonly used to address underage drinking, drunk driving and teenage pregnancy. Parents can be fined, charged or ordered to take parenting classes for willingly, or through insufficient control or supervision, permitting the child to violate the curfew. Many local curfew laws were enacted in the 1950s and 1960s to attack the "juvenile delinquent" problem of youth gangs. Most curfew exceptions include:

A 2011 UC-Berkeley study looked at the 54 larger U.S. cities that enacted youth curfews between 1985 and 2002 and found that arrests of youths affected by curfew restrictions dropped almost 15% in the first year and approximately 10% in following years.[22] However, not all studies agree with the conclusion that youth curfew laws actually reduce crime, and many studies find no benefit or sometimes even the opposite.[23][24] For example, one 2016 systematic review of 12 studies on the matter found that the effect on crime is close to zero, and can perhaps even backfire somewhat.[25]

Many malls in the United States have policies that prohibit minors under a specified age from entering the mall after specified times,[28] unless they are accompanied by a parent or another adult or are working at the mall during curfew times.[29] Such policies are known as mall curfews. Malls that have policies prohibiting unaccompanied minors at any time are known as parental escort policies.[30]

States and municipalities in the United States have occasionally enacted curfews on the population at large, often as a result of severely inclement weather or political unrest. Some such curfews require all citizens simply to refrain from driving. Others require all citizens to remain inside, with exceptions granted to those in important positions, such as elected officials, law enforcement personnel, first responders, health care workers, and the mass media.

However, unlike juvenile curfews, all-ages curfews have always been very limited in terms of both location and duration. That is, they are temporary and restricted to very specific areas, and generally only implemented during states of emergency, then subsequently lifted or allowed to sunset.

In 2015, the city of Baltimore enacted a curfew on all citizens that lasted for five days and prohibited all citizens from going outdoors from 10 pm to 5 am with the exception of those traveling to or from work and those with medical emergencies. This was in response to the 2015 Baltimore protests.