Cucumber (Cucumis sativus) is a widely-cultivated creeping vine plant in the Cucurbitaceae gourd family that bears cucumiform fruits, which are used as vegetables.[1] There are three main varieties of cucumber—slicing, pickling, and burpless/seedless—within which several cultivars have been created. The cucumber originates from South Asia, but now grows on most continents, as many different types of cucumber are traded on the global market. In North America, the term wild cucumber refers to plants in the genera Echinocystis and Marah, though the two are not closely related.

The cucumber is a creeping vine that roots in the ground and grows up trellises or other supporting frames, wrapping around supports with thin, spiraling tendrils.[2] The plant may also root in a soilless medium, whereby it will sprawl along the ground in lieu of a supporting structure. The vine has large leaves that form a canopy over the fruits.

The fruit of typical cultivars of cucumber is roughly cylindrical, but elongated with tapered ends, and may be as large as 62 centimeters (24 in) long and 10 centimeters (4 in) in diameter.[3]

Cucumber fruits consist of 95% water (see nutrition table). In botanical terms, the cucumber is classified as a pepo, a type of botanical berry with a hard outer rind and no internal divisions. However, much like tomatoes and squashes, it is often perceived, prepared, and eaten as a vegetable.[4]

A few cultivars of cucumber are parthenocarpic, the blossoms of which create seedless fruit without pollination, which degrades the eating quality of these cultivar. In the United States, these are usually grown in greenhouses, where bees are excluded. In Europe, they are grown outdoors in some regions, where bees are likewise excluded.

Most cucumber cultivars, however, are seeded and require pollination. For this purpose, thousands of honey beehives are annually carried to cucumber fields just before bloom. Cucumbers may also be pollinated via bumblebees and several other bee species. Most cucumbers that require pollination are self-incompatible, thus requiring the pollen of another plant in order to form seeds and fruit.[5] Some self-compatible cultivars exist that are related to the 'Lemon' cultivar.[5] Symptoms of inadequate pollination include fruit abortion and misshapen fruit. Partially-pollinated flowers may develop fruit that are green and develop normally near the stem end, but are pale yellow and withered at the blossom end.

Traditional cultivars produce male blossoms first, then female, in about equivalent numbers. Newer gynoecious hybrid cultivars produce almost all female blossoms. They may have a pollenizer cultivar interplanted, and the number of beehives per unit area is increased, but temperature changes induce male flowers even on these plants, which may be sufficient for pollination to occur.[5]

trans,cis-2,6-Nonadienal, or cucumber aldehyde, is a component of the distinctive aroma of cucumbers.

In a 100-gram (3 1⁄2-ounce) serving, raw cucumber (with peel) is 95% water, provides 67 kilojoules (16 kilocalories) of food energy, and supplies low content of essential nutrients, as it is notable only for vitamin K at 16% of the Daily Value (table).

Depending on variety, cucumbers may have a mild melon aroma and flavor, in part resulting from unsaturated aldehydes, such as (E,Z)-nona-2,6-dienal, and the cis- and trans- isomers of 2-nonenal.[6] The slightly bitter taste of cucumber rind results from cucurbitacins.[7]

In 2009, an international team of researchers announced they had sequenced the cucumber genome.[8]

Cucumbers grown to eat fresh are called slicing cucumbers. The main varieties of slicers mature on vines with large leaves that provide shading.[9] They are mainly eaten in the unripe green form, as the ripe yellow form normally becomes bitter and sour. Smaller slicing cucumbers can also be pickled.

Slicers grown commercially for the North American market are generally longer, smoother, more uniform in color, and have much tougher skin. In contrast, those in other countries, often called European cucumbers, are smaller and have thinner, more delicate skin, often with fewer seeds, thus being sold in plastic skin for protection. This variety may also be called a telegraph cucumber, particularly in Australasia.[10] 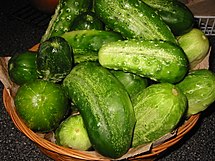 Pickling with brine, sugar, vinegar, and spices creates various flavored products from cucumbers and other foods.[11] Although any cucumber can be pickled, commercial pickles are made from cucumbers specially bred for uniformity of length-to-diameter ratio and lack of voids in the flesh. Those cucumbers intended for pickling, called picklers, grow to about 7 to 10 cm (3 to 4 in) long and 2.5 cm (1 in) wide. Compared to slicers, picklers tend to be shorter, thicker, less-regularly shaped, and have bumpy skin with tiny white or black-dotted spines. Color can vary from creamy yellow to pale or dark green.

Gherkins, also called cornichons,[12] or baby pickles, are small cucumbers, typically those 2.5 to 12.5 centimetres (1 to 5 in) in length, often with bumpy skin, which are typically used for pickling.[13][14][15] The word gherkin comes from the early modern Dutch gurken or augurken ('small pickled cucumber').[16] The term is also used in the name for Cucumis anguria, the West Indian gherkin, a closely related species.[17]

Burpless cucumbers are sweeter and have a thinner skin than other varieties of cucumber. They are reputed to be easy to digest and to have a pleasant taste. They can grow as long as 60 centimeters (2 ft), are nearly seedless, and have a delicate skin. Most commonly grown in greenhouses, these parthenocarpic cucumbers are often found in grocery markets, shrink-wrapped in plastic. They are marketed as either burpless or seedless, as the seeds and skin of other varieties of cucumbers are said to give some people gas.[18]

Several other cultivars are sold commercially:

Cultivated for at least 3,000 years, the cucumber originated from India, where a great many varieties have been observed, along with its closest living relative, Cucumis hystrix.[20] It was probably introduced to other parts of Europe by the Greeks or Romans. Records of cucumber cultivation appear in France in the 9th century, England in the 14th century, and in North America by the mid-16th century.[1][21][22][23]

According to Pliny the Elder, the Emperor Tiberius had the cucumber on his table daily during summer and winter. In order to have it available for his table every day of the year, the Romans reportedly used artificial methods of growing (similar to the greenhouse system), whereby mirrorstone refers to Pliny's lapis specularis, believed to have been sheet mica:[24][25]

Indeed, he was never without it; for he had raised beds made in frames upon wheels, by means of which the cucumbers were moved and exposed to the full heat of the sun; while, in winter, they were withdrawn, and placed under the protection of frames glazed with mirrorstone.

Reportedly, they were also cultivated in specularia, cucumber houses glazed with oiled cloth.[24] Pliny describes the Italian fruit as very small, probably like a gherkin. He also describes the preparation of a medication known as elaterium. However, some scholars[who?] believe that he was instead referring to Ecballium elaterium, known in pre-Linnean times as Cucumis silvestris or Cucumis asininus ('wild cucumber' or 'donkey cucumber'), a species different from the common cucumber.[26] Pliny also writes about several other varieties of cucumber, including the cultivated cucumber,[27] and remedies from the different types (9 from the cultivated; 5 from the "anguine;" and 26 from the "wild"). The Romans are reported to have used cucumbers to treat scorpion bites and bad eyesight, and to scare away mice. Wives wishing for children wore them around their waists. They were also carried by midwives, and thrown away when the child was born.[citation needed]

Charlemagne had cucumbers grown in his gardens in the 8th/9th century. They were reportedly introduced into England in the early 14th century, lost, then reintroduced approximately 250 years later. The Spaniards (through the Italian Christopher Columbus) brought cucumbers to Haiti in 1494. In 1535, Jacques Cartier, a French explorer, found “very great cucumbers” grown on the site of what is now Montreal.

Throughout the 16th century, European trappers, traders, bison hunters, and explorers bartered for the products of American Indian agriculture. The tribes of the Great Plains and the Rocky Mountains learned from the Spanish how to grow European crops. The farmers on the Great Plains included the Mandan and Abenaki. They obtained cucumbers and watermelons from the Spanish, and added them to the crops they were already growing, including several varieties of corn and beans, pumpkins, squash, and gourd plants.[29] The Iroquois were also growing them when the first Europeans visited them.[30]

In 1630, the Reverend Francis Higginson produced a book called New-Englands Plantation in which, describing a garden on Conant’s Island in Boston Harbor known as The Governor’s Garden, he states:[31]

The countrie aboundeth naturally with store of roots of great varietie [sic] and good to eat. Our turnips, parsnips, and carrots are here both bigger and sweeter than is ordinary to be found in England. Here are store of pompions, cowcumbers, and other things of that nature which I know not…

In New England Prospect (1633, England), William Wood published observations he made in 1629 in America:[32]

The ground affords very good kitchin gardens, for Turneps, Parsnips, Carrots, Radishes, and Pompions, Muskmillons, Isquoter-squashes, coucumbars, Onyons, and whatever grows well in England grows as well there, many things being better and larger. [sic]

Age of Enlightenment and later

In the later 17th century, a prejudice developed against uncooked vegetables and fruits. A number of articles in contemporary health publications stated that uncooked plants brought on summer diseases and should be forbidden to children. The cucumber kept this reputation for an inordinate period of time, "fit only for consumption by cows," which some believe is why it gained the name, cowcumber.

A copper etching made by Maddalena Bouchard between 1772 and 1793 shows this plant to have smaller, almost bean-shaped fruits, and small yellow flowers. The small form of the cucumber is figured in Herbals of the 16th century, however stating that "[i]f hung in a tube while in blossom, the Cucumber will grow to a most surprising length."

Samuel Pepys wrote in his diary on 22 August 1663:[33] "[T]his day Sir W. Batten tells me that Mr. Newburne is dead of eating cowcumbers, of which the other day I heard of another, I think." In The Greenstone Door, William Satchell notes that "Te Moanaroa was dead – of a surfeit of cucumbers," having eaten four of the "prickly" melons. (Chapter XX, "The Storm Cloud").

In May 2011, cucumbers infected with E. coli were claimed to have caused the deaths of at least ten people, leading to some retailers withdrawing cucumbers from sale in Germany, Austria and the Czech Republic.[34] The cucumbers were initially thought to have come from Spain. However, subsequent testing failed to show contamination in imported Spanish cucumbers, which led to the Spanish Government demanding compensation for Spanish farmers who had been forced to destroy huge quantities of cucumbers.[35]

After the outbreak, the World Health Organization stated that it was a completely new strain of the bacterium involved.[36] In 2016, world production of cucumbers and gherkins was 80.6 million tonnes, led by China with nearly 77% of the total.[28]