The Cuban Revolutionary Air and Air Defense Force (Spanish: Defensa Anti-Aérea y Fuerza Aérea Revolucionaria) commonly abbreviated to DAAFAR in both Spanish and English, is the air force of Cuba.

In the 1980s, Cuba with the help of the Soviet Union was able to project power abroad, using its air force, especially in Africa. During that time Cuba sent jet fighters and transports for deployment in conflict zones such as Angola and Ethiopia.

In 1990, Cuba's Air Force was the best equipped in Latin America. In all, the modern Cuban Air Force imported approximately 230 fixed-wing aircraft. Although there is no exact figure available, Western analysts estimate that at least 130 (with only 25 operational[1]) of these planes are still in service spread out among the thirteen military airbases on the island.

In 1996, fighters from the DAAFAR shot down two Cessna aircraft based in Florida which were accused of dropping leaflets into Cuban airspace. The air force was criticized for not giving the pilots of the aircraft options other than being shot down. One aircraft escaped.[2]

In 1998, according to the same DIA report mentioned above, the air force had 'fewer than 24 operational MIG fighters; pilot training barely adequate to maintain proficiency; a declining number of fighter sorties, surface-to-air missiles and air-defense artillery to respond to attacking air forces.[3]

By 2007 the International Institute for Strategic Studies assessed the force as 8,000 strong with 41 combat capable aircraft and a further 188 stored. DAAFAR is known now to have integrated another Mig-29 and a few MiG-23s which makes it 58 combat aircraft in active service which are listed as 6 MiG-29s, 40 MiG-23s, and 12 MiG-21s. There were also assessed to be 12 operational transport aircraft plus trainers which include 8 L-39C and helicopters which are mainly Mil Mi-8, Mil Mi-17 and Mil Mi-24 Hind. Raúl Castro ordered in 2010 that all MiG-29 pilots had to have full training, they now have from 200–250 hours of flight annually together with real dogfight training and exercises. Up to 20 MiG-23 units also have this kind of training but the other 16 MiG-23 units spend more time in simulators than real flight. MiG-21 units have limited time in this exercises and spend more time in simulators and maintain their skills flying with the commercial brand of the air force Aerogaviota.

A left side view of a Cuban MIG-21 fighter aircraft inside VF-45 hangar. 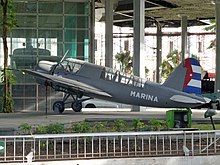