Canadian Crown corporations (French: sociétés de la Couronne du Canada) are corporations wholly owned by the Crown and most are agents of the Crown with each ultimately accountable, through a relevant minister, to Parliament for the conduct of its affairs.[1] As a result, Crown corporations represent more broadly a specific form of state-owned enterprise owned by the Sovereign of Canada.[2][3][4] They are established by an Act of Parliament and report to that body via the relevant minister in cabinet,[5] though they are "shielded from constant government intervention and legislative oversight" and thus "generally enjoy greater freedom from direct political control than government departments."[5]

Crown corporations have a very long-standing presence in the country and have been instrumental in its formation. They can provide services required by the public that otherwise would not be economically viable as a private enterprise or that do not fit exactly within the scope of any ministry.[4] They are involved in everything from the distribution, use, and price of certain goods and services to energy development, resource extraction, public transportation, cultural promotion, and property management.

In Canada, Crown corporations within either the federal or provincial spheres are owned by the monarch as the institution's sole legal shareholder. This follows the legal premise that the monarch, as the personification of Canada, owns all state property. Although these corporations are owned by the Crown, they are operated at arm's length from it with direct control over operations only being exerted over the corporation's budget and the appointment of its senior leadership through Orders-in-Council.

Some Crown corporations are expected to be profitable organisations, while others are non-commercial and rely entirely on public funds to operate.[2] Further, in the federal sphere, certain Crown corporations can be an agent or non-agent of the Queen in Right of Canada. One with agent status is entitled to the same constitutional prerogatives, privileges, and immunities held by the Crown and can bind the Crown by its acts. The Crown is thus entirely responsible for the actions of these organisations. The Crown is not liable for Crown corporations with non-agent status, except for actions of that corporation carried out on instruction from the government, though there may be "moral obligations" on the part of the Crown in other circumstances.[6]

Prior to the formation of Crown corporations as presently understood, much of what later became Canada was settled and governed by a similar type of entity called a chartered company. These companies were established by a royal charter by the Scottish, English, or French crown, but were owned by private investors. They fulfilled the dual roles of promoting government policy abroad and making a return for shareholders. Certain companies were mainly trading businesses, but some were given a mandate (by royal charter) to govern a specific territory called a charter colony, and the head of this colony, called a proprietary governor, was both a business manager and the governing authority in the area. The first colonies on the island of Newfoundland were founded in this manner, between 1610 and 1728. 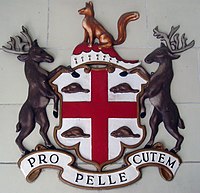 Canada's most famous and influential chartered company was the Hudson's Bay Company (HBC), founded on May 2, 1670, by royal charter of King Charles II. The HBC became the world's largest land owner, at one point overseeing 7,770,000 km2 (3,000,000 sq mi),[7] territories that today incorporate the provinces of Manitoba, Saskatchewan and Alberta, as well as Nunavut, the Northwest Territories, and Yukon. The HBC were often the point of first contact between the colonial government and First Nations. By the late 19th century, however, the HBC lost its monopoly over Rupert's Land and became a fully privatised company.

The first major Canadian experience with directly state-owned enterprises came during the early growth of the railways. During the earlier part of the century, many British North American colonies that now comprise the Canadian federation had Crown corporations, often in the form of railways, such as the Nova Scotia Railway, since there was limited private capital available for such endeavours. When four British colonies joined to create the Canadian federation in 1867, these railways were transferred to the new central government. As well, the construction of the Intercolonial Railway between them was one of the terms of the new constitution. The first section of this entirely government-owned railway was completed in 1872.

Western Canada's early railways were all run by privately owned companies backed by government subsidies and loans. By the early twentieth century, however, many of these had become bankrupt. The federal government nationalised several failing Western railways and combined them with its existing Intercolonial and other line in the East to create Canadian National Railways (CNR) in 1918 as a transcontinental system. The CNR was unique in that was a conglomerate, and besides passenger and freight rail, it had inherited major business interests in shipping, hotels, and telegraphy and was able create new lines of business in broadcasting and air travel. Many of the components of this business empire where later spun off into new Crown corporations including some the most important businesses in the mid-twentieth century economy of Canada, such Air Canada, the Canadian Broadcasting Corporation (CBC), Via Rail, and Marine Atlantic.

Provincial Crown corporations also re-emerged in the early twentieth century, most notably in the selling of alcohol. Government monopoly liquor stores were seen as a compromise between the recently ended era of Prohibition in Canada and the excesses of the previous open market which had led to calls for prohibition in the first place. Virtually all the provinces used this system at one point. The largest of these government liquor businesses, the Liquor Control Board of Ontario (founded 1927), was by 2008 one of the world's largest alcohol retailers. Resource and utility companies also emerged at this time, notably Ontario Hydro in 1906, Alberta Government Telephones in 1906, and SaskTel in 1908. Provincial governments also re-entered the railway business as in Northern Alberta Railways in 1925 and what later became BC Rail in 1918. A notable anomaly of this era is Canada's only provincially owned "bank" (though not called that for legal reasons) Alberta Treasury Branches, created in 1937.

New crown Corporations were also created throughout much of the mid-century. A government-owned bank, Business Development Bank of Canada was created in 1944. The federal Post Office Department became a Crown corporation as Canada Post Corporation in 1981, and Canada's export credit agency, Export Development Canada, was created in 1985. Perhaps the most controversial was Petro-Canada, Canada's short-lived attempt to create a national oil company, founded in 1975.

Not only the federal government was involved, but also the provinces, who were in engaged in an era of "province building" (expanding the reach and importance of the provincial governments) around this time. The prototypical example is undoubtedly Hydro-Québec, founded in 1944 and now Canada's largest electricity generator and the world's largest producer of hydro-electricy. It is widely seen as a symbol of modern Quebec, helping to create the Quiet Revolution of the 1960s where French-speakers in Quebec rose to positions of influence in the industrial economy for the first time, and Quebec nationalism emerged as a political force. This model followed by SaskPower in 1944 and BC Hydro in 1961. Other areas provinces were active in included insurance (Saskatchewan Government Insurance, 1945)

The heyday of Crown corporations ended in the late 1980s, and there has been much privatisation since that time, particularly at the federal level. Air Canada was privatised in 1988 and CN in 1995.

In Alberta, the term public agency is used to describe "boards, commissions, tribunals or other organizations established by government, but not part of a government department".[8]

Crown corporations in Ontario are sometimes referred to as Crown agencies:

Finances Québec published a list 60 Quebec Crown corporations (French: sociétés d'État), in June 2017.[11] The following entities were among those listed:[11]

Several private Canadian companies were once Crown corporations, including: