Following the Croatian–Hungarian Settlement of 1868, the Kingdom of Croatia-Slavonia and the Government of the Land or officially the Royal Croatian-Slavonian-Dalmatian Government of the Land (Croatian: Zemaljska vlada or Kraljevska hrvatsko-slavonsko-dalmatinska zemaljska vlada)—headed by a crown-appointed ban—were established. This government existed until the Austria-Hungary breakup and the Kingdom of Serbs, Croats and Slovenes' creation in 1918. In 1939, the Banovina of Croatia was established and a head of the Banovina of Croatia (Ban) was appointed by the crown, but no effective government was formed before World War II. In 1943, the ZAVNOH established an executive board to act as a new government. Communist Croatia, while a part of Communist Yugoslavia, had a separate government (from 1953 to 1990 known as the Executive Council, appointed by the Sabor) with limited powers (excluding defence and foreign relations; this was similar to all the previous governmental forms). Following the first multi-party elections and the adoption of the present Constitution of Croatia in 1990, the present governmental form was adopted and Stjepan Mesić became the first person to lead a non-communist government (however, with Croatia as part of Yugoslavia), while Josip Manolić was the first prime minister of an independent Croatia. Since Communist rule's end, the Republic of Croatia has had fourteen governments headed by twelve different prime ministers. Nine governments have been formed by the Croatian Democratic Union, three by the Social Democratic Party of Croatia, one was headed by a non-partisan prime minister and one was a national unity government (formed during the Croatian War of Independence's peak).

The term "Government" in Croatia (Vlada) primarily refers to the executive branch, as used by the government itself, the press and colloquially, as that branch of the government (vlast) is responsible for day-to-day governance of the nation (uprava); this sense is intended when it is said that a political party forms the Government.[1][2][3] 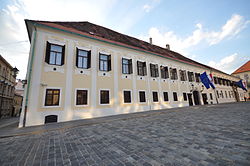 Banski dvori, headquarters of the Government of the Republic of Croatia

The executive branch is responsible for proposing legislation and a budget, executing the laws and guiding the foreign and internal policies of the republic. The government's official residence is at the Banski dvori in Zagreb.[5] Although the cabinet normally meets at the Banski dvori, occasionally its meetings are held elsewhere in the country.[6]

The Government of the Republic of Croatia exercises its executive powers in conformity with the Croatian Constitution and legislation enacted by the Croatian Parliament, the Sabor (Croatian: Hrvatski sabor). Its structure, operational procedures and decision-making processes are defined by the Government of the Republic of Croatia Act (2011 with 2014 and 2016 amendments) and the Government Rules of Procedure (2015 with 2015 amendments). The Constitution mandates that the Government proposes legislation and other documents to the parliament, proposes the budget and gives financial reports, implements Acts and other decisions of the parliament, enacts any regulations required to implement the Acts, defines foreign and internal policies, directs and oversees the operation of state administration, promotes the economic development of the country, directs the activities and development of public services and performs other activities conforming to the provisions of the Constitution and applicable legislation. The Government also passes regulations and administrative acts and orders appointments and removals of appointed officials and civil servants within the scope of its powers. Furthermore, the Government makes rulings in cases of conflicts of jurisdiction between governmental institutions, responds to questions asked parliamentary majority and opposition representatives,[7] prepares proposals of new legislation and other regulations, gives opinions on legislation and other regulations and adopts strategies for the economic and social development of the country.[8][9] 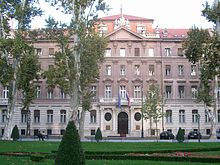 The Government manages state property of the Republic of Croatia unless special legislation provides otherwise. It may appoint special committees to manage the property on its behalf; this process is implemented through appointed members of supervisory boards and managing boards of companies partially or wholly owned by the Republic of Croatia. (The Government also determines these appointees' salaries.) The Government maintains specialized bodies, agencies and offices—including the Legislation Office, the Office for Human Rights and the Rights of National Minorities and Public Relations Service—that are required by the Government Act of 2011, as well as committees to decide administrative matters. Various branches of government may establish joint services.[8] There are further entities established by the government as companies designed to support the aims of the Government, such as the Croatian Bank for Reconstruction and Development that strives to fund the reconstruction and development of the economy of Croatia.[10]

Local (city/municipality) and regional (county) governments are separate from the central government; the latter maintains a State Administration Office in each county, under the Ministry of Public Administration.[11]

Government meetings are public; however, the government may decide to close any part of its sessions (or entire sessions) to the public. The prime minister may authorise any deputy to represent the PM and otherwise take over any particular task assigned to the PM. The quorum for government sessions is a majority of government members. Most decisions are reached by a simple majority vote; a two-thirds majority vote is required for decisions about changes to the Croatian Constitution, uniting with other states or transferring any part of Croatian sovereignty to supranational organisations, changes to Croatian borders, dissolution of the parliament, or calling a referendum.[8]

See also: Kingdom of Croatia-Slavonia and Socialist Republic of Croatia

Ban Pavao Rauch at St. Mark's Square in Zagreb, with Banski dvori in the background

Short-lived Croatian Royal Council (1767–79), appointed by queen Maria Theresa, was a central authority administering economic, political and military matters in Kingdom of Croatia.[48] Ban's Council (Croatian: Bansko vijeće) of 1848–1850 was the first executive council established in Croatia. It acted as an administrative body governing Croatia (and Slavonia) within the Austrian Empire as a government, later to be replaced by the Ban's Government (1850–1854), Royal Lieutenancy for Croatia and Slavonia (1854–1861), and Royal Lieutenancy Council (1861–1868) in Zagreb (with Royal Croatian-Slavonian-Dalmatian Chancellery in Vienna, 1862–1868).[49]

Following the Austro-Hungarian Compromise of 1867 and the subsequent Croatian–Hungarian Settlement of 1868, the Kingdom of Croatia-Slavonia was established, along with the Government of the Land, officially the Royal Croatian-Slavonian-Dalmatian Government of the Land (Croatian: Zemaljska vlada or Kraljevska hrvatsko-slavonsko-dalmatinska zemaljska vlada) headed by a crown-appointed ban. The establishment was carried out during the administration of Ban Levin Rauch.[50][51] This government form continued until the breakup of Austria-Hungary and creation of the Kingdom of Serbs, Croats and Slovenes in 1918. In total, 15 Bans acted as heads of the government in this period.[52] The Royal Croatian-Slavonian-Dalmatian Government was not a parliamentary government, as its cabinet ministers and its head (Ban) were not appointed or confirmed by the Croatian Parliament (Sabor), but by Hungarian-Croatian government in Budapest.

In the Kingdom of Yugoslavia, the Cvetković–Maček Agreement was made in 1939; it established the Banovina of Croatia and Ivan Šubašić was appointed as ban to head the Croatian government (Ban's Government, Croatian: Banska vlast).[53] Still, an effective government was not formed before the onset of World War II.[54]

Following the parliamentary elections and the adoption of the present Constitution of Croatia in 1990, the present form of government was begun. On 30 May 1990, Stjepan Mesić became the first person to hold the title of Prime Minister of Croatia, and Franjo Gregurić was the first prime minister of an independent Croatia, as he held the office on 8 October 1991 when the declaration of independence came into effect.[57][58]

See also: Prime Minister of Croatia and List of cabinets of Croatia

Since 30 May 1990 (the first multi-party parliamentary election held following the 45-year Communist rule), the Republic of Croatia has had a total of fourteen governments headed by twelve different prime ministers. The prime minister in the first government after the first multi-party election was Stjepan Mesić, who would later go on to become the President of Croatia. That government was formed by the Croatian Democratic Union (HDZ), as were seven other governments of Croatia. Three governments have been formed by the Social Democratic Party of Croatia (SDP), and one was a national unity government (representing a wide coalition of political parties) formed during the Croatian War of Independence's peak, between July 1991 and August 1992, with Franjo Gregurić as the prime minister.[57]