Croatian Australians (Croatian: Australski Hrvati) are Australian citizens of Croatian descent. Croatia has been a source of migrants to Australia, particularly in the 1960s and 1970s. In 2016, 133,268 persons resident in Australia (0.6%) identified themselves as having Croatian ancestry.

Croats were first noticeable in Australia during the gold rushes of the 1850s in the province of Victoria. At this time, Croats were coded as "Austrians" because most of Croatia was a part of the Habsburg Empire. By Australian federation in 1901, there were many Croats—mainly from Dalmatia—in Australia, counted with Czechs, Hungarians, Serbs, Slovaks and others as "Austro-Hungarians". The establishment of the Kingdom of Serbs, Croats and Slovenes from Austria-Hungary after the First World War — renamed as Yugoslavia shortly afterwards —continued to make it difficult to separate out Croats from other ethnicities in Australia. Croats were not recorded separately until the 1996 Census. The Australian Department of Immigration believes many Croats holding old (and now long out of date) Yugoslav passports still record themselves as Yugoslavs in Australian censuses, over a decade after the disintegration of Yugoslavia.

There is also a community of Croats who follow Islam, the descendants of those who converted after the 16th century, after the conquest of much of Croatia and Bosnia by the Ottomans. They established their Croatian Islamic Centre in 36 Studley St Maidstone, Victoria.[3][4][5][6] with a masjid.[7] Croatian Seventh-Day adventists meet in St. Albans

Nevertheless, it is known that Croats formed a large proportion of those Yugoslavs who settled in Australia the 1960s and 1970s under Australian Government migration schemes.[citation needed] The Yugoslavia-born population reached 129,616 by the 1971 Census and 160,479 by the 1991 Census. The greatest number settled in Sydney and Melbourne, though Croats are well represented in every Australian city and region.

During the 1960s and 1970s, many Croatians were constantly under ASIO surveillance for alleged terrorist activities organised by the Yugoslav secret service, several of whom were named in the media. Some of the longest running and most expensive court cases in Australian history involved Croatians charged with terrorism-related charges that were proven falsified, including the 'Croatian Six' who were convicted on tainted evidence. Federal Attorney-General Lionel Murphy created a media sensation when he led a raid on ASIO Headquarters looking for files on Croatian terrorist activities and not finding any at all, spurred on by claims of non-surveillance by ASIO and that ASIO focused too much of its time on student anti-war groups instead of terrorist groups, though there may have been no terrorist activities for ASIO to investigate.[8] 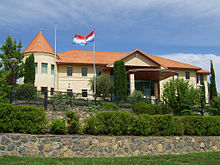 In November 1977, an unofficial Croatian embassy was opened in Canberra, causing a legal and diplomatic difficulty for both the Australian and Yugoslav governments.[9] The embassy, aimed at raising awareness of Croatia as a nation and the Croatian people separate from Yugoslavia, remained open for 2 years closing in 1979. Its ambassador Mario Despoja is the father of former Democrats leader Natasha Stott Despoja.

Since the independence of Croatia in the 1990s, an official embassy has been opened in Canberra and consulates have been opened in Melbourne, Sydney and Perth.

People of Croatian ancestry according to the 2011 census results

As at the 2006 census 33,012 Croatian-born Australians (65%) speak Croatian at home; 17% of Croatian-born Australians speak English at home.[11] Proficiency in English was self-described by census respondents as very well by 31%, well by 32%, 17% not well, 2.3% not at all (18% didn't state or said not applicable).[11] In 2001, the Croatian language was spoken at home by 69,900 persons in Australia.[citation needed] Croatian is the tenth most widely spoken language in the country after English, Chinese, Italian, Greek, Arabic, Vietnamese, Spanish, Tagalog, German, and Macedonian.[citation needed]

Croatian Australians have an exceptionally low rate of return migration to Croatia. In December 2001, the Department of Foreign Affairs estimated that there were 1,000 Australian citizens resident in Croatia, mainly in Zagreb.[12]

Entertainment and the arts