Croatian Americans or Croat Americans[a] (Croatian: Američki Hrvati or Hrvati u Americi) are Americans who have full or partial Croatian ancestry. In 2012, there were 414,714 American citizens[1] of Croat or Croatian descent living in the United States as per revised 2010 United States Census. The figure includes all people affiliated with United States who claim Croatian ancestry, both those born in the country and naturalized citizens, as well as those with dual citizenship who affiliate themselves with both countries or cultures.

Croatian Americans are closely related to other European American ethnic groups, especially Slavic Americans and are predominantly of Roman Catholic faith. Regions with significant Croatian American population include metropolitan areas of Chicago, Cleveland, New York City, Southern California and especially Pittsburgh, the seat of Croatian Fraternal Union, fraternal benefit society of the Croatian diaspora.[3][4] Croatia's State Office for the Croats Abroad estimated that there are up to 1.2 million Croats and their descendants living in the United States.[2]

According to the 2007 US Community Survey, there were 420,763 Americans of full or partial Croatian descent.[5] According to the 1990 United States Census, there were over 544,270 Croatian Americans who identified themselves as being of Croatian descent or being born in Croatia.[6] As of 2012, there were 414,714 American citizens.[1] It is estimated by the Croatia's State Office for the Croats Abroad that there are around 1,200,000 Croats and their descendants living in the United States today.[2]

In the 2006–2010 American Community Survey, the states with the largest Croatian American populations are:[7]

The first major immigration of Croats was recorded in 1715.[13] At the time, approximately twelve hundred Croatian Protestants, whose ancestors had left the Austrian Empire after unsuccessful peasant revolts in 1573 and anti-Reformation edict of 1598, arrived in the American colony of Georgia. They settled in the valley of Savannah River.[13] Those settlers introduced silk-worm cultivation in Georgia. The community prospered for 150 years, until it was demolished during the Civil War.[14]

Many early Croat immigrants settled in New Orleans,[13] and were employed as traders, artisans and fishermen. By the 1860s, there were around six hundred Croat families in New Orleans. Several families settled permanently in Alabama. During the Civil War, some three thousand Croats resided in the South, mostly in Louisiana, Alabama and Mississippi. Hundreds of them volunteered for the Confederate Army and Navy. After the defeat of the Confederacy in 1865, many Croats who had served in the Confederate military moved to the West.[14]

Significant emigration from what is now Croatia dates from the late 1890s and early 1900s, peaking around 1910, when many Croatians, the majority of them Roman Catholics, began emigrating to the United States. Many were economic immigrants, while others considered themselves political refugees.[15][16]

Like other immigrants of that period, they migrated to find employment. Many of them, mostly single young men but, often, married women with or without their families, settled in small towns in Pennsylvania and New York as coal miners or steelworkers. Many also settled in factory towns and farming areas in Midwestern states such as Wisconsin, Minnesota, Indiana, Illinois, and Iowa. For most of the single men, the stay was only temporary. Once they had saved enough money, many Croatian men returned to Croatia. However, those who did choose to stay found permanent residence.[13][15][17]

Within a comparatively short period of time, Croatians could be found all over the United States from New York to California, from New Orleans to Minneapolis-St. Paul.[15] As it went through its most rapid expansion during the time of the 1890-1914 Great Migration and shortly thereafter from the onset of the First World War to the general clampdown on immigration in 1924, Croats and other South and West Slavs and members of other groups peaking in influx at the time were prominent in the history of the mining industry in the Iron Range of Minnesota; much the same is the case with the forestry-related industries there, elsewhere in Minnesota and in much of Wisconsin. A notable Croatian-American from the Iron Range was Rudy Perpich, the 34th and 36th Governor of the state representing the Democrat/Farmer-Labor Party; he served terms in office from 29 December 1976 to 4 January 1979, and from 3 January 1983 to 7 January 1991, spans of time which add up to make him the longest-serving governor in the state's history. In private life, Perpich was a dentist and after leaving office in 1991 assisted the post-communist government of Croatia. He was born in Carson Lake, Minnesota (now part of Hibbing) on 27 June 1928 and died of cancer in Minnetonka, Minnesota on 21 September 1995.

A new wave of Croatian immigrants began to arrive after World War II. These were mostly political refugees, including orphans whose parents had been killed during the war, individuals and families fleeing Yugoslavia's communist authorities.[15] Most of these Croatians settled in established Croatian colonies, often among relatives and friends. Beginning in 1965, America saw a new influx of Croatians.[15] Gradually, this new wave of immigrants joined Croatian Catholic parishes and organizations, and soon became the contemporary bearers of Croatian culture and tradition in the United States. Currently, only a small number of Croatians continue to emigrate, mostly those who have relatives already well established in America.[16]

Group of Croatian men in the club of town Joliet, Illinois around 1900

The first recorded Croatian immigrants to the United States arrived in 1850, often via the resettlement from nations that are presently known as Austria, Italy, Greece, Spain, and Portugal, and southern France. During this period many Croats, who were employed in manufacturing the maritime sector of the Mediterranean states, began emigrating to the Americas. This first wave arrived in regions of the United States where employment opportunities were similar to where they had arrived from. By the middle of the 20th Century, the metropolitan areas of Chicago, Cleveland, Pittsburgh, New York City, San Francisco Bay Area and the region of Southern California had the largest populations of people with Croatian ancestry.[21][18] 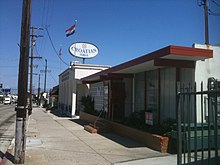 Croatian immigrants first settled in the Western United States in the second half of the 19th century, mainly in what were then growing urban centers of Los Angeles, San Pedro, San Francisco, Phoenix and Santa Ana.[22] It is estimated that more than 35,000 Croats live in Los Angeles metropolitan area today, making it the biggest Croatian community on the Pacific coast.[22] San Francisco became the center of Croatian social life in California, where they established the first Croatian emigration society, Croatian American Cultural Center of San Francisco, in 1857.[15][23] Tadich Grill in San Francisco is an example from the era, the oldest continuously running restaurant in the city.[24] The Los Angeles metropolitan area was a major destination for the post-1980s Yugoslavian immigration, including Croats and Bosnian Croats from Bosnia and Herzegovina who escaped the Bosnian civil war in the 1990s. They formed several communities in Orange County, San Diego and San Fernando Valley.[15]

An unspecified number of Croats also settled in Washington state and Oregon, particularly metropolitan areas of Seattle and Portland respectively.[15][22]

Some of the first groups of immigrants settled in Pennsylvania as well.[15][16] As a major industrial center of the state, Pittsburgh employed a lot of immigrants from Croatia, many of them were working in the heavy industry. At the beginning of the century there were an estimated 38,000 Croats in Pittsburgh. It was estimated that there were more than 200,000 Croatians and their descendants living in Pennsylvania in the early 1990s.[4]

The first Croatian settlers in Michigan appeared in the late 19th century.[15][22] In Illinois, the Croatians started concentrating mostly around Chicago. Although it was created a bit later, the Croatian settlement in Chicago became one of the most important ones in the United States. The settlement especially started developing after World War I and Chicago became the center of all Croatian cultural and political activities. It is calculated that there were roughly 50,000 Croats in Chicago in the 1990s, while there were altogether 100,000 Croats living in 54 additional Croatian settlements in Illinois. Croats form a large community in Indianapolis in Indiana since the 1910s, as well in Gary, Fort Wayne and South Bend.[15][16]

While at first New York City served merely as a station on arriving settlers' way elsewhere into the United States, mainly the Midwest, East Coast saw an influx of Croatian and other European settlers in early 19th, before and following First World War; mainly the cities of Hoboken and New York, latter of which is the site of SS. Cyril, Methodius, and Raphael's Church, a Roman Catholic parish, part of Roman Catholic Archdiocese of New York.[25][26]

During the Klondike Gold Rush, a group of 3,000 Croatian immigrants settled in Alaska and Canada.[22]

Croatian Americans maintain a close relationship with their homeland.[15] The diaspora is considered to have played a pivotal role in securing Croatia's victory in Croatian War of Independence by providing substantial financial aid and advocating for American involvement in the conflict.[27] Chain migration contributed to the creation of settlements of Croats coming from the same regions of Croatia.[17] They were connected because of their similar occupations that they had, equal social status and Roman Catholic religion.[17] The most popular informal meeting points of Croatians were the saloons. They were usually engaged in various charity organizations, and were among the first Croatian immigrants who learned to speak English.[28] Beside these informal gatherings, Croatian Americans established several thousand organizations of different importance. In his work, "Early Croatian Immigration to America After 1945", Prpic states that there were around 3,000 organizations founded between 1880 and 1940 in the United States.[28] Croatians first started founding charitable, cultural, educational, religious, business, political, sporting or athletic organizations. All these organizations were firmly rooted in the settlement where they were initiated. Croatians were a minority group both in relation to Americans and other nationalities.[25] Furthermore, the Croats came with the latest groups of immigrants, which led to a further feeling of insecurity. Most of early settlers did not speak English and held low-paid jobs, which created an inferiority complex. They found security within an organization of their own ethnic group.[25][28]

Croatian diaspora is predominantly Roman Catholic.[15] Croatian missionaries founded parishes, churches and benevolent societies throughout the country wherever Croatian Americans settled.[15] Often, the priests were the only educated members of the Croatian colonies, and thus they had to assume leadership roles; moreover, they were among the first to learn English well and often served as translators and interpreters.[17] Their primary responsibility, however, was the organization of Croatian Catholic parishes in the urban centers with substantial Croatian populations. Thus, at the beginning of this century there were Croatian churches in Pittsburgh and Steelton, Pennsylvania, New York, Chicago, Cleveland, Saint Louis and other cities. The oldest parish is St. Nicholas Church in Pittsburgh, founded in 1894; several others were erected in the early 1900s, such as the Church of the Nativity in San Francisco. Even before being officially established in 1926, the Croatian Franciscan friars traveled throughout the United States, establishing and assisting in Croatian parishes and keeping alive the religious and national sentiments of their people.[15] Today, there are over 30 Croatian parishes in North America.[29]

Notable Croatian Americans, past and present, include: