The Criminal Code[1] (French: Code criminel[2]) is a law that codifies most criminal offences and procedures in Canada. Its official long title is An Act respecting the criminal law (R.S.C. 1985, c. C-46, as amended). Section 91(27) of the Constitution Act, 1867 establishes the sole jurisdiction of Parliament over criminal law in Canada.

The Criminal Code contains some defences, but most are part of the common law rather than statute. Important Canadian criminal laws not forming part of the code include the Firearms Act, the Controlled Drugs and Substances Act, the Canada Evidence Act, the Food and Drugs Act, the Youth Criminal Justice Act and the Contraventions Act.

One of the conveniences of the Criminal Code was that it constituted the principle that no person would be able to be convicted of a crime unless otherwise specifically outlined and stated in a statute. This legal document has played a major part in Canada's history and has also helped form other legal acts and laws, for example, the Controlled Drugs and Substances Act.[3] 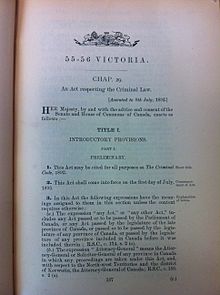 Picture of the first page of the Criminal Code, 1892

The main body of the Criminal Code is divided into the following major components. In these major sections, there are many subsections that help to accurately layout the law:

The Criminal Code also includes the descriptions of each drug and what schedule it is. This extension helps to determine the severity of the drug and the length of punishment when caught with the drug. It also distinguishes what amount is considered for personal consumption and what amount is considered meant for trafficking. It also includes the different layouts for warrants so that people can familiarize themselves with the form of warrant that the police should have with them depending on the type of search they are conducting. However, the majority of the public may not take the time to view the different warrants, the government has to provide them so that people can refer to them if ever to come in contact with a warrant.

The Criminal Code of Canada stems from a long history of legal documents. The following documents play a part in the construction and changes brought on the Criminal Code:

There are many case studies out on the Criminal Code, however, there are only five that have been used by the government to analyse the document itself. Each of the case studies focuses on a different area of the Criminal Code. In the case study of Corletta, she is faced with a person who continues to criminally harass her and once he is charged continues the harassment. However, once the time for trial comes, he pleads guilty and gets a one year intermittent sentence. She does not feel this is enough, however, she is unable to do anything as she did not have the proof that he harassed her after his initial arrest (one of the two key factors for his sentence). Therefore, the fact that she was unable to come forward with new evidence that he continued after the initial arrest, he was unable to receive the possible treatment that he may have needed to avoid another incident from occurring. The other four case studies deal with harassment by a known stranger, a partner, a customer, and an anonymous stranger. (For further on the other four cases refer to A review of section 264 (criminal harassment) of the Criminal Code of Canada).