Advertisement - You can get this game from STEAM
Distinctive type of brick from Milwaukee, Wisconsin 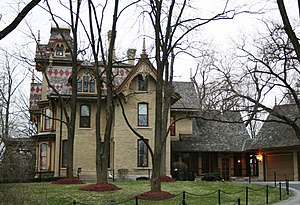 Cream City brick is a cream or light yellow-colored brick made from a clay found around Milwaukee, Wisconsin, in the Menomonee River Valley and on the western banks of Lake Michigan. These bricks were one of the most common building materials used in Milwaukee during the mid and late 19th century, giving the city the nickname "Cream City" and the bricks the name "Cream City bricks".[1]

Cream City bricks are made from a red clay containing elevated amounts of lime and sulfur;[2] this clay is common in regions of Wisconsin, especially near Milwaukee. When the bricks are fired, they become creamy-yellow in color.[1]

Although light-colored when first made, Cream City bricks are porous, causing them to absorb dirt and other pollutants; this tends to make structures constructed out of them dark-colored as time passes. Once Cream City bricks absorb pollutants, they are difficult to clean, a problem which restoration experts in Milwaukee have been facing since the 1970s. Initially, sandblasting was attempted; however, it not only proved to be ineffective, but damaged the bricks. Currently, chemical washes are accepted as the most effective method of cleaning Cream City bricks.[2] The historic Trimborn Farmhouse in Greendale, Wisconsin is an example of brick that has been cleaned to reveal its original color.

Trinity Evangelical Lutheran Church, located in Milwaukee, Wisconsin, is an example of a building constructed with Cream City brick, though its cream color has been darkened by the elements.

Cream City bricks are well known for their durability; many buildings constructed with them in the 19th century still stand today. An example of the durability of Cream City brick is Trinity Evangelical Lutheran Church, which was built more than 125 years ago. However, since there were numerous brickmakers in the area, brick quality varied and some of the bricks were not manufactured properly: the Big Sable Point Lighthouse was constructed of Cream City brick, but it had degraded so much in 35 years that it had to be encased in iron plating.[1] See also, Grosse Point Light, which had to be encased in concrete.[3]

Because the regional headquarters of the United States Lighthouse Board responsible for building lighthouses around Lake Michigan was located in Milwaukee, many of them are built with Cream City bricks, including Kenosha Light, the Eagle Bluff Lighthouse, the McGulpin Point Light, the Old Mackinac Point Light, and many others.[1]

Cream City bricks were widely exported, making their way not only to American cities such as Chicago and New York, but also to western Europe, including Hamburg, Germany.[2]