This article uses the classical treatment of tensors and Einstein summation convention throughout and the Minkowski metric has the form diag(+1, −1, −1, −1). Where the equations are specified as holding in a vacuum, one could instead regard them as the formulation of Maxwell's equations in terms of total charge and current.

Lorentz tensors of the following kinds may be used in this article to describe bodies or particles:

where γ(u) is the Lorentz factor at the 3-velocity u.

is the total energy, and

The electromagnetic tensor is the combination of the electric and magnetic fields into a covariant antisymmetric tensor whose entries are B-field quantities. [1]

and the result of raising its indices is

where E is the electric field, B the magnetic field, and c the speed of light.

The differential of the electromagnetic potential is

In the language of differential forms, which provides the generalisation to curved spacetimes, these are the components of a 1-form

is the exterior derivative and

and the Maxwell stress tensor is given by

where η is the Minkowski metric tensor (with signature (+ − − −)). Notice that we use the fact that

which is predicted by Maxwell's equations.

In vacuum (or for the microscopic equations, not including macroscopic material descriptions), Maxwell's equations can be written as two tensor equations.

while the homogeneous equations – Faraday's law of induction and Gauss's law for magnetism combine to form:

where Fαβ is the electromagnetic tensor, Jα is the four-current, εαβγδ is the Levi-Civita symbol, and the indices behave according to the Einstein summation convention.

Each of these tensor equations corresponds to four scalar equations, one for each value of β.

Using the antisymmetric tensor notation and comma notation for the partial derivative (see Ricci calculus), the second equation can also be written more compactly as:

In the absence of sources, Maxwell's equations reduce to:

which is an electromagnetic wave equation in the field strength tensor.

Maxwell's equations in the Lorenz gauge

The Lorenz gauge condition is a Lorentz-invariant gauge condition. (This can be contrasted with other gauge conditions such as the Coulomb gauge, which if it holds in one inertial frame will generally not hold in any other.) It is expressed in terms of the four-potential as follows:

In the Lorenz gauge, the microscopic Maxwell's equations can be written as: 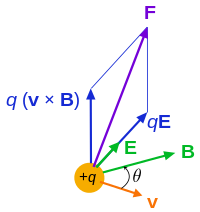 Lorentz force f on a charged particle (of charge q) in motion (instantaneous velocity v). The E field and B field vary in space and time.

Electromagnetic (EM) fields affect the motion of electrically charged matter: due to the Lorentz force. In this way, EM fields can be detected (with applications in particle physics, and natural occurrences such as in aurorae). In relativistic form, the Lorentz force uses the field strength tensor as follows.[4]

Expressed in terms of coordinate time t, it is:

where pα is the four-momentum, q is the charge, and xβ is the position.

Expressed in frame-independent form, we have the four-force

where uβ is the four-velocity, and τ is the particle's proper time, which is related to coordinate time by dt = γdτ. 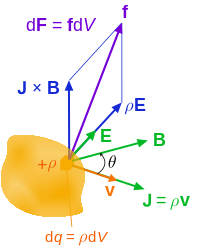 The density of force due to electromagnetism, whose spatial part is the Lorentz force, is given by

and is related to the electromagnetic stress–energy tensor by

which expresses the conservation of linear momentum and energy by electromagnetic interactions.

In order to solve the equations of electromagnetism given here, it is necessary to add information about how to calculate the electric current, Jν Frequently, it is convenient to separate the current into two parts, the free current and the bound current, which are modeled by different equations;

Maxwell's macroscopic equations have been used, in addition the definitions of the electric displacement D and the magnetic intensity H:

where M is the magnetization and P the electric polarization.

which determines the bound current

If this is combined with Fμν we get the antisymmetric contravariant electromagnetic displacement tensor which combines the D and H fields as follows:

The three field tensors are related by:

which is equivalent to the definitions of the D and H fields given above.

The result is that Ampère's law,

combine into one equation:

In vacuum, the constitutive relations between the field tensor and displacement tensor are:

Antisymmetry reduces these 16 equations to just six independent equations. Because it is usual to define Fμν by

the constitutive equations may, in vacuum, be combined with the Gauss–Ampère law to get:

The electromagnetic stress–energy tensor in terms of the displacement is:

where δαπ is the Kronecker delta. When the upper index is lowered with η, it becomes symmetric and is part of the source of the gravitational field.

. For example, in the simplest materials at low frequencies, one has

The constitutive relations between the

where u is the four-velocity of material, ε and μ are respectively the proper permittivity and permeability of the material (i.e. in rest frame of material),

and denotes the Hodge dual.

The Lagrangian density for classical electrodynamics is composed by two components: a field component and a source component:

In the interaction term, the four-current should be understood as an abbreviation of many terms expressing the electric currents of other charged fields in terms of their variables; the four-current is not itself a fundamental field.

The Lagrange equations for the electromagnetic lagrangian density

can be stated as follows:

the expression inside the square bracket is

The second term is

Therefore, the electromagnetic field's equations of motion are

which is one of the Maxwell equations above.

Separating the free currents from the bound currents, another way to write the Lagrangian density is as follows:

Using Lagrange equation, the equations of motion for

The equivalent expression in non-relativistic vector notation is