The New York Times The Coca-Cola Company Box
For coupons for interest payments on bonds, see Coupon (finance); for other uses, see Coupon (disambiguation)
a document, paper or electronic, to provide a discount on goods or services 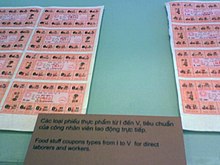 In marketing, a coupon is a ticket or document that can be redeemed for a financial discount or rebate when purchasing a product.

Customarily, coupons are issued by manufacturers of consumer packaged goods[1] or by retailers, to be used in retail stores as a part of sales promotions. They are often widely distributed through mail, coupon envelopes, magazines, newspapers, the Internet (social media, email newsletter), directly from the retailer, and mobile devices such as cell phones.

The New York Times reported "more than 900 manufacturers' coupons were distributed" per household, and that "the United States Department of Agriculture estimates that four families in five use coupons.[2] "Only about 4 percent" of coupons received were redeemed.[2] Coupons can be targeted selectively to regional markets in which price competition is great.

Most coupons have an expiration date, although American military commissaries overseas honor manufacturers coupons for up to six months past the expiration date.[3]

The word is of French origin, pronounced [kupɔ̃]. In Britain, the United States, and Canada it is pronounced /ˈkuːpɒn/ KOO-pon. A common alternate American pronunciation is /ˈkjuːpɒn/ KEW-pon.[4]

Believed to be the first coupon ever, this ticket for a free glass of Coca-Cola was first distributed in 1888 to help promote the drink. By 1913, the company had redeemed 8.5 million tickets.[5]

Coca-Cola's 1888-issued "free glass of" is the earliest documented coupon.[5][6] Coupons were mailed to potential customers and placed in magazines. It is estimated that between 1894 and 1913 one in nine Americans had received a free Coca-Cola, for a total of 8,500,000 free drinks. By 1895 Coke was served in every state in the United States.[7]

In 1929 Betty Crocker began a loyalty points program and began issuing coupons that could be used to redeem for premiums like free flatware. In 1937 the coupons were printed on the outside of packages. The loyalty program ended in 2006, one of the longest loyalty programs.[8]

In Australia consumers first came in contact with couponing when a company called Shopa Docket promoted offers and discounts on the back of shopping receipts in 1986.[9]

Coupons offer different types of values, such as discounts, free shipping, buy-one get-one, trade-in for redemption, first-time customer coupons, free trial offer, launch offers, festival offers, and free giveaways. Similarly, there are varied uses of coupons which include: to incentivize a purchase, reduce a price, provide a free sample,[10] or to aid marketers in understanding the demographics of their customer.

Coupons can be used to research the price sensitivity of different groups of buyers (by sending out coupons with different dollar values to different groups). Time, location and sizes (e.g. five pound vs. 20 pound bag)[11] affect prices; coupons are part of the marketing mix.[12] So is knowing about the customer. [13][11]

Some grocery stores regularly double or even triple the value of coupons to bring customers into their stores.[2] Periodic special events double or triple coupon values on certain days or weeks.[14]

Coupons exist in more than one form, and are acquired by customers in a variety of ways.

Historically, verifying the discount offered has been via presenting coupons clipped from newspapers[1] or received in the mail. Some retailers and companies use verification methods such as unique barcodes, coupon ID numbers, holographic seals, and watermarked paper as protection from unauthorized copying or use. Other than newspapers, there are also coupon book publishers and retailers who compile vouchers and coupons into books, either for sale or free.

By the mid-1990s, "couponing had also moved to the internet."[15] An early term was clipless coupons.[16] Later on the term "downloadable coupons" came into use.[17] Options include:

Depending on the jurisdiction, coupons may or may not reduce the sales tax which must be paid by the consumer. The most consumer-friendly tax situation taxes the actual price paid, including when the store does double and triple coupon reductions.[22]

Coupon manufacturers may or may not place restrictions on coupons limiting their transferability to ensure the coupons stay within the targeted market. Since such restrictions are not universal and are difficult and/or costly to enforce, limited coupon trading is tolerated in the industry. Organized coupon exchange clubs are commonly found in regions where coupons are distributed. Often coupons are available for purchase at some online sites,[24] but since most coupons are not allowed to be sold, the fee is considered to be for the time and effort put into cutting out the coupons.

Some types of coupons may be sold. The New York Times not only said "the traffic is legal" regarding selling airline discount coupons, but wrote "check the commercial notices column in The New York Times or the classified advertising section under 'Miscellaneous') in The Wall Street Journal.[25]

During war time or economic hardships, trading or selling ration coupons is an economic crime.[26][27]