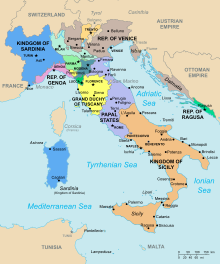 The County of Nice was part of the Italian "Kingdom of Sardinia" in 1796.

Its territory lies between the Mediterranean Sea (Côte d'Azur), Var River and the southernmost crest of the Alps.

Ligurian tribes populated the County of Nice prior to its occupation by the Romans. These tribes, conquered by Augustus, had become fully Romanized (according to Theodore Mommsen) by the 4th century, when the barbarian invasions began. In those Roman centuries the area was part of the Regio IX Liguria of Italy.

The Franks conquered the region after the Fall of the Western Roman Empire, and the local Romance populations became integrated within the County of Provence, with a period of independence as a maritime republic (1108–1176). It was initially a semi-autonomous part of the ancient County of Provence.

In 1388 the citizens of Nice decided to hand over the city and its surrounding areas to the count of Savoy. Within Savoy the region was initially named Terres neuves de Provence. The region received the name County of Nice around 1500, after its integration into the Piedmontese state. County is meant here as an administrative unit rather than as a medieval fief. From 1388 to 1860 the history of the County of Nice was tied to that of Savoy and then Piedmont-Sardinia. Its historical capital city is Nice. 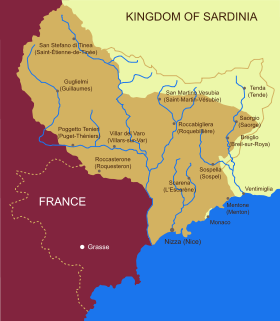 A map of the County of Nice showing the area of the Kingdom of Sardinia annexed in 1860 to France (light brown). The red area was already part of France before 1860. 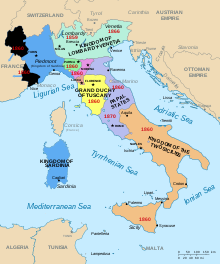 France annexed the County in 1860, during the Italian Wars of Independence. By an 1858 secret agreement concluded at Plombières between Napoleon III of France and Sardinian prime minister Count Camillo Benso di Cavour, France agreed to support Piedmont in a war against Austria in order to wrest the provinces of Lombardy and Venetia from Austrian rule. In exchange for French military assistance, Piedmont was to cede Nice and Savoy to France. The annexation was temporarily put into doubt after the Italian war of 1859, during which Napoleon III concluded a separate peace with Austria before Venetia could be captured. In March 1860, however, as Piedmont was in the process of annexing Parma, Modena, and the Marches, Napoleon III agreed to sanction Piedmont's Italian acquisitions in exchange for Nice and Savoy. France annexed the provinces by the provisions of the Treaty of Turin, signed on 24 March 1860. There followed plebiscites in Nice on 15 and 16 April and in Savoy on 22 and 23 April, in which the vast majority of the inhabitants of the two territories voted to approve the treaty and join France. France took formal possession of Nice and Savoy on 12 June 1860.

Nevertheless, the Italian nationalist leader Giuseppe Garibaldi, who was born in Nice, strongly opposed the cession of his home city to France, arguing that the County of Nice was essentially Italian and should not be sold as a "ransom" to French expansionism.

As the County was too small to form its own département, the French government added it to the arrondissement of Grasse, detached from the neighboring Var department, to create the Alpes-Maritimes department. Since 1860 the County has been largely coterminous with the Arrondissement of Nice, one of two arrondissements of the Alpes-Maritimes, in the Provence-Alpes-Côte d'Azur region. Nevertheless, the term County of Nice (Countea de Nissa in Niçard language) continues in use today to identify the territory as a distinct cultural and historical region, particularly to distinguish it from neighboring Provence.

The historical language used by inhabitants of the County of Nice was Niçard, though it has been almost entirely supplanted by French since 1860.

Since 2010 the statue Neuf Lignes Obliques on the Promenade des Anglais commemorates the 150th year of Nice's annexation.