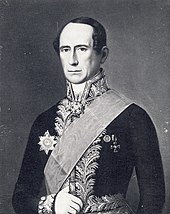 Count Carl Gustaf Mannerheim (1797–1854), the governor of the Vyborg Province, entomologist and the grandfather of Baron C. G. E. Mannerheim

Count (feminine: countess) is a historical title of nobility in certain European countries, varying in relative status, generally of middling rank in the hierarchy of nobility.[1] The etymologically related English term "county" denoted the land owned by a count. Equivalents of the rank of count exist or have existed in the nobility structures of some non-European countries, such as hakushaku during the Japanese Imperial era.[citation needed]

The word count came into English from the French comte, itself from Latin comes—in its accusative comitem—meaning “companion”, and later “companion of the emperor, delegate of the emperor”. The adjective form of the word is "comital". The British and Irish equivalent is an earl (whose wife is a "countess", for lack of an English term). In the late Roman Empire, the Latin title comes denoted the high rank of various courtiers and provincial officials, either military or administrative: before Anthemius became emperor in the West in 467, he was military comes charged with strengthening defenses on the Danube frontier.[2]

Military counts in the Late Empire and the Germanic successor kingdoms were often appointed by a dux and later by a king. From the start the count was not in charge of a roving Warband, but settled in a locality, known as a county; his main rival for power was the bishop, whose diocese was sometimes coterminous with the county.

In many Germanic and Frankish kingdoms in the early Middle Ages, a count might also be a count palatine, whose authority derived directly from the royal household, the "palace" in its original sense of the seat of power and administration. This other kind of count had vague antecedents in Late Antiquity too: the father of Cassiodorus held positions of trust with Theodoric, as comes rerum privatarum, in charge of the imperial lands, then as comes sacrarum largitionum ("count of the sacred doles"), concerned with the finances of the realm.[3]

The position of comes was originally not hereditary. By virtue of their large estates, many counts could pass the title to their heirs—but not always. For instance, in Piast Poland, the position of komes was not hereditary, resembling the early Merovingian institution. The title had disappeared by the era of the Polish–Lithuanian Commonwealth, and the office had been replaced by others. Only after the Partitions of Poland did the title of "count" resurface in the title hrabia, derived from the German Graf.

Originally, with the emergence of the title came the most powerful symbol of entitlement, that is the ownership of and jurisdiction over land, hence the term county. The term is derived from the Old French conté or cunté denoting a jurisdiction under the control of a count (earl) or a viscount.[4] The modern French is comté, and its equivalents in other languages are contea, contado, comtat, condado, Grafschaft, graafschap, Gau, etc. (cf. conte, comte, conde, Graf).

The title of Count was also often conferred by the monarch as an honorific title for special services rendered, without a feudal estate (countship, county) being attached, so it was merely a title, with or without a domain name attached to it. In the United Kingdom, the equivalent "Earl" can also be used as a courtesy title for the eldest son of a duke or marquess. In the Italian states, by contrast, all the sons of certain counts were counts (contini). In Sweden there is a distinction between counts (Swedish: greve) created before and after 1809. All children in comital families elevated before 1809 were called count/countess. In families elevated after 1809, only the head of the family was called count, the rest have a status similar to barons and were called by the equivalent of "Mr/Ms/Mrs", before the recognition of titles of nobility was abolished.

The following lists are originally based on a Glossary on Heraldica.org by Alexander Krischnig. The male form is followed by the female, and when available, by the territorial circumscription.

Etymological derivations from the Latin comes

Etymological parallels with the German Graf (some approximate)

Apart from all these, a few unusual titles have been of comital rank, not necessarily permanently.

Kingdom of the Western Franks

Since Louis VII (1137–80), the highest precedence amongst the vassals (Prince-bishops and secular nobility) of the French crown was enjoyed by those whose benefice or temporal fief was a pairie, i.e. carried the exclusive rank of pair; within the first (i.e. clerical) and second (noble) estates, the first three of the original twelve anciennes pairies were ducal, the next three comital comté-pairies:

Later other countships (and duchies, even baronies) have been raised to this French peerage, but mostly as apanages (for members of the royal house) or for foreigners; after the 16th century all new peerages were always duchies and the medieval countship-peerages had died out, or were held by royal princes

Other French countships of note included those of:

See also above for parts of present France

The title of Conte is very prolific on the peninsula. In the eleventh century, Conti like the Count of Savoy or the Norman Count of Apulia, were virtually sovereign lords of broad territories. Even apparently "lower"-sounding titles, like Viscount, could describe powerful dynasts, such as the House of Visconti which ruled a major city such as Milan. The essential title of a feudatory, introduced by the Normans, was signore, modeled on the French seigneur, used with the name of the fief. By the fourteenth century, conte and the Imperial title barone were virtually synonymous[citation needed].

Some titles of a count, according to the particulars of the patent, might be inherited by the eldest son of a Count. Younger brothers might be distinguished as "X dei conti di Y" ("X of the counts of Y"). However, if there is no male to inherit the title and the count has a daughter, in some regions she could inherit the title.

Many Italian counts left their mark on Italian history as individuals, yet only a few contadi (countships; the word contadini for inhabitants of a "county" remains the Italian word for "peasant") were politically significant principalities, notably:

The principalities tended to start out as margraviate or (promoted to) duchy, and became nominal archduchies within the Habsburg dynasty; noteworthy are:

In the Low Countries

Apart from various small ones, significant were :

Comital ephemera: a Count's coronet and crest on a doily.

In other continental European countries

Count/Countess was one of the noble titles granted by the Pope as a temporal sovereign, and the title's holder was sometimes informally known as a papal count/papal countess or less so as a Roman count/Roman countess, but mostly as count/countess. The comital title, which could be for life or hereditary, was awarded in various forms by popes and Holy Roman Emperors since the Middle Ages, infrequently before the 14th century, and the pope continued to grant the comital and other noble titles even after 1870, it was largely discontinued in the mid 20th-century, on the accession of John XXIII. The Papacy and the Kingdom of the Two Sicilies might appoint counts palatine with no particular territorial fief. Until 1812 in some regions, the purchaser of land designated "feudal" was ennobled by the noble seat that he held and became a conte. This practice ceased with the formal abolition of feudalism in the various principalities of early-19th century Italy, last of all in the Papal States.

Poland was notable throughout its history for not granting titles of nobility. This was on the premise that one could only be born into nobility, pace vary rare exceptions. Instead it conferred non-hereditary courtly or civic roles. The noble titles that were in use on its territory were invariably of foreign provenance and usually subject to the process of Indygenat, naturalisation.

Somewhat similar to the native privileged class of nobles found in Poland, Hungary also had a class of Conditional nobles.

On the Iberian peninsula

As opposed to the plethora of hollow "gentry" counts, only a few countships ever were important in medieval Iberia; most territory was firmly within the Reconquista kingdoms before counts could become important. However, during the 19th century, the title, having lost its high rank (equivalent to that of Duke), proliferated.

Portugal itself started as a countship in 868, but became a kingdom in 1139 (see:County of Portugal). Throughout the History of Portugal, especially during the Constitutional Monarchy many other countships were created (see: List of Countships in Portugal).

Coronet of a count (Spanish heraldry)

In Spain, no countships of wider importance exist, except in the former Spanish march.[citation needed]

In the First Bulgarian Empire, a komit was a hereditary provincial ruler under the tsar documented since the reign of Presian (836-852)[8] The Cometopouli dynasty was named after its founder, the komit of Sredets.

In Denmark and historically in Denmark-Norway the title of count (greve) is the highest rank of nobility used in the modern period. Some Danish/Dano-Norwegian countships were associated with fiefs, and these counts were known as "feudal counts" (lensgreve). They rank above ordinary (titular) counts, and their position in the Danish aristocracy as the highest-ranking noblemen is broadly comparable to that of dukes in other European countries.[9]. With the first free Constitution of Denmark of 1849 came a complete abolition of the privileges of the nobility. Since then the title of count has been granted only to members of the Danish royal family, either as a replacement for a princely title when marrying a commoner, or in recent times, instead of that title in connection with divorce. Thus the first wife of Prince Joachim of Denmark, the younger son of Margrethe II of Denmark, became Alexandra, Countess of Frederiksborg on their divorce - initially retaining her title of princess, but losing it on her remarriage.

In Sweden the rank of count is the highest rank conferred upon nobles in the modern era and are, like their Danish and Norwegian counterparts, broadly comparable to that of dukes in other European countries. Unlike the rest of Scandinavia, the title of duke is still used in Sweden, but only by members of the royal family and are not considered part of the nobility.

Like other major Western noble titles, Count is sometimes used to render certain titles in non-western languages with their own traditions, even though they are as a rule historically unrelated and thus hard to compare, but which are considered "equivalent" in rank.

This is the case with:

The title "Count" in fiction is commonly given to evil characters or vampires: