Advertisement - You can get this game from STEAM
Region that is identified as a distinct entity in political geography
For other uses, see Country (disambiguation). 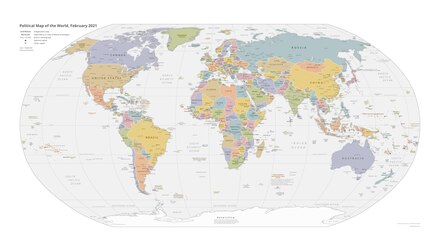 2019 map showing countries with full recognition and some UN non-member states; some disputed territories are not shown

A country is a political state, nation, or controlled territory. It is often referred to as the land of an individual's birth, residence, or citizenship.

A country may be an independent sovereign state or part of a larger state,[1] as a non-sovereign or formerly sovereign political division, a physical territory with a government, or a geographic region associated with sets of previously independent or differently associated people with distinct political characteristics. It is not inherently sovereign.

Countries can refer both to sovereign states and to other political entities, such as Vatican City,[2] while other times it can refer only to states.[3] For example, the CIA World Factbook uses the word in its "Country name" field to refer to "a wide variety of dependencies, areas of special sovereignty, uninhabited islands, and other entities in addition to the traditional countries or independent states".[4][note 1]

The largest country in the world is Russia, while the most populous is China, followed by India and the United States of America.[13] The newest country with widespread international recognition as a sovereign state is South Sudan.

The word country comes from Old French contrée, which derives from Vulgar Latin (terra) contrata ("(land) lying opposite"; "(land) spread before"), derived from contra ("against, opposite"). It most likely entered the English language after the Franco-Norman invasion during the 11th century.

In English the word has increasingly become associated with political divisions, so that one sense, associated with the indefinite article – "a country" – through misuse and subsequent conflation is now a synonym for state, or a former sovereign state, in the sense of sovereign territory or "district, native land".[14] Areas much smaller than a political state may be called by names such as the West Country in England, the Black Country (a heavily industrialized part of England), "Constable Country" (a part of East Anglia painted by John Constable), the "big country" (used in various contexts of the American West), "coal country" (used of parts of the US and elsewhere) and many other terms.[15]

The equivalent terms in French and other Romance languages (pays and variants) have not carried the process of being identified with political sovereign states as far as the English "country", instead derived from, pagus, which designated the territory controlled by a medieval count, a title originally granted by the Catholic Church. In many European countries the words are used for sub-divisions of the national territory, as in the German Bundesländer, as well as a less formal term for a sovereign state. France has very many "pays" that are officially recognized at some level, and are either natural regions, like the Pays de Bray, or reflect old political or economic entities, like the Pays de la Loire.

A version of "country" can be found in the modern French language as contrée, based on the word cuntrée in Old French,[15] that is used similarly to the word "pays" to define non-state regions, but can also be used to describe a political state in some particular cases. The modern Italian contrada is a word with its meaning varying locally, but usually meaning a ward or similar small division of a town, or a village or hamlet in the countryside.

Most countries have two names, a protocol name and a geographical name or short name.[16][17][18]

The protocol name (full name, formal name, official name) e.g. the Slovak Republic, the Czech Republic, the Swiss Confederation, the State of Qatar, the Principality of Monaco, the Kingdom of Norway, the Grand Duchy of Luxembourg, the Federal Democratic Republic of Ethiopia, the People's Democratic Republic of Algeria, the Argentine Republic, the United Kingdom of Great Britain and Northern Ireland, the United States of America, the United Mexican States, the Commonwealth of Australia, the Socialist Republic of Vietnam, the Union of Soviet Socialist Republics. The long form (official title) is used when the state is targeted as a legal entity: e.g. This Decision is addressed to the United Kingdom of Great Britain and Northern Ireland., The French Republic is authorised to …, Agreement between the Arab Republic of Egypt and the Russian Federation …. If the recurrence of the name of a state in the text leads to a preference for using the short form, it can be introduced with the phrase ‘hereinafter referred to as …’.

The term "country" can refer to a sovereign state. There is no universal agreement on the number of "countries" in the world since a number of states have disputed sovereignty status. By one application of the declarative theory of statehood and constitutive theory of statehood, there are 206 sovereign states; of which 193 are members of the United Nations, two have observer status at the UN (the Holy See and Palestine), and 11 others are neither a member nor observer at the UN. The latest proclaimed state is South Sudan since 2011.

The degree of autonomy of non-sovereign countries varies widely. Some are possessions of sovereign states, as several states have overseas territories (such as French Polynesia or the British Virgin Islands), with citizenry at times identical and at times distinct from their own. Such territories, with the exception of distinct dependent territories, are usually listed together with sovereign states on lists of countries, but may nonetheless be treated as a separate "country of origin" in international trade, as Hong Kong is.[20][21][22]

A few states consist of a union of smaller polities which are considered countries:

The United Nations Department of Economic and Social Affairs annually produces the World Economic Situation and Prospects report that classified states as developed countries, economies in transition, or developing countries. The report classifies country development based on per capita gross national income. Within the broad categories, the United Nations identified subgroups based on geographical location or ad hoc criteria. The UN outlines the geographical regions for developing economies as Africa, East Asia, South Asia, Western Asia, and Latin America and the Caribbean. The 2019 report recognizes only developed countries in North America, Europe, and Asia and the Pacific. The majority of economies in transition and developing countries are found in Africa, Asia, and Latin America and the Caribbean.