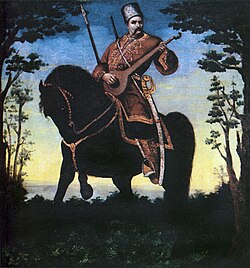 Cossack Mamay is encountered in legends, folk stories and proverbs. These became widely popular after the dissolution of the Zaporizhian Sich in 1775. Cossack Mamay is one of the most common characters in Ukrainian folk painting, from the late 17th century to the present time. In the hundreds of surviving paintings, Cossack Mamay is usually shown with a kobza – a lute-like musical instrument that is the symbol of Ukrainian soul; a horse, which represented both freedom and fidelity; and an oak with his weapons hanging on it symbolizing the people's strength. The paintings from the time of Koliyivschyna sometimes portray Mamay on the background of violent incidents involving Poles or Jews. [2]

In 2003, director Oles Sanin made the film "Mamay" at the Oleksandr Dovzhenko National Film Studio.

In music, the image of Cossack Mamay was reflected in the songs of contemporary Ukrainian bands Komu Vnyz, and Vopli Vidoplyasova.

During the Revolution of Dignity, the artist Mykola Goncharov recreated the image of Cossack Mamaiya in graffiti and posters of the series "All you need is love", replacing the kobza with a Kalashnikov rifle, and the damask with a lit Molotov cocktail.

On the 1997 coin minted by National Bank of Ukraine, Cossack Mamay is dressed in a rich coat with fur and sits with his legs crossed, smoking a pipe and playing a kobza. Traditional elements of Cossack military life are around Mamay: a horse with rich harness, tied to a spear with a flag planted into the ground; a green oak tree with a sabre hanging from it; a pistol and a stone powder case; Turkish kalpak (high hat), and a bottle of okovyta (Ukrainian for aqua vitae).

The coin edge has the inscriptions: (Ukrainian: Козак Мамай, Cossack Mamay) – at the left and (Ukrainian: Лицар волі і честі, Knight of Freedom and Honor) – at the right. On top, these inscriptions are separated with a small flag at the spear point and, underneath, a conventionalized guelder-rose spray.

The Mamay coin is from the "Heroes of the Cossack Age" series, Ukrainian commemorative and jubilee coins.