listen); Guaraní: Taragüí, literally: "Currents") is the capital city of the province of Corrientes, Argentina, located on the eastern shore of the Paraná River, about 1,000 km (621 mi) from Buenos Aires and 300 km (186 mi) from Posadas, on National Route 12. It has a population of 346,334 according to the 2010 Census. It lies opposite its twin city, Resistencia, Chaco.

Corrientes has a mix of colonial and modern architecture, several churches and a number of lapacho, ceibo, jacaranda and orange trees. It is also home to one of the biggest carnival celebrations in the country.

The General Belgrano Bridge crosses the Paraná River that serves as the natural border with the neighbouring Chaco Province. On the other side of the bridge is Resistencia, capital of Chaco. To the west and up the Paraná, between Paraguay and Argentina, lies the Yaciretá dam, one of the largest hydroelectric power generators in the world.

The Ferrocarril Económico Correntino narrow gauge railway line to Mburucuyá operated from 1912 until 1927.

In 1516 Juan Díaz de Solís commanded the first expedition to reach the area populated mainly by Guaraní aboriginals, but his expedition was attacked and Solís perished in the adventure. 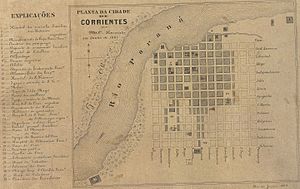 Plan of the city of Corrientes in June 1867.

Sebastian Cabot established in 1527 the Sancti Spiritu fort upstream of the Paraná River, and in 1536 Pedro de Mendoza reached further north into the basin of the river, searching for the Sierras of Silver.

Juan Torres de Vera y Aragón founded on April 3, 1588 San Juan de Vera de las Siete Corrientes ("Saint John of Vera of the Seven Currents"), which was later shortened to Corrientes. The "seven currents" refer to the seven peninsulas on the shore of the river at this place, that produced wild currents that made difficult the navigation of the river through this part.

Nevertheless, its position between Asunción - in present Paraguay - and Buenos Aires made it an important middle point, especially because of its 55-metre-high lands that prevent flooding when the water level rises.

In 1615 Jesuits settled near the Uruguay River. In 1807 the city resisted the British invasions. During the Argentine War of Independence it was in permanent conflict with the centralist government of Buenos Aires, but the Paraguayan War united them after the city was attacked by Paraguayan forces in 1865.