PMID (identifier) Doi (identifier) PMC (identifier)
"Heart bypass" redirects here. For the technique to take over the function of the heart and lungs during surgery, see Cardiopulmonary bypass.

There are two main approaches. In one, the left internal thoracic artery, LITA (also called left internal mammary artery, LIMA) is diverted to the left anterior descending branch of the left coronary artery. In this method, the artery is "pedicled" which means it is not detached from the origin. In the other, a great saphenous vein is removed from a leg; one end is attached to the aorta or one of its major branches, and the other end is attached to the obstructed artery immediately after the obstruction to restore blood flow.

CABG is performed to relieve angina unsatisfactorily controlled by maximum tolerated anti-ischemic medication, prevent or relieve left ventricular dysfunction, and/or reduce the risk of death. CABG does not prevent myocardial infarction (heart attack). This surgery is usually performed with the heart stopped, necessitating the usage of cardiopulmonary bypass. However, two alternative techniques are also available, allowing CABG to be performed on a beating heart either without using the cardiopulmonary bypass, a procedure referred to as "off-pump" surgery, or performing beating surgery using partial assistance of the cardiopulmonary bypass, a procedure referred to as "on-pump beating" surgery. The latter procedure offers the advantages of the on-pump stopped and off-pump while minimizing their respective side-effects.

CABG is often indicated when coronary arteries have a 50 to 99 percent obstruction. The obstruction being bypassed is typically due to arteriosclerosis, atherosclerosis, or both. Arteriosclerosis is characterized by thickening, loss of elasticity, and calcification of the arterial wall, most often resulting in a generalized narrowing in the affected coronary artery. Atherosclerosis is characterized by yellowish plaques of cholesterol, lipids, and cellular debris deposited into the inner layer of the wall of a large or medium-sized coronary artery, most often resulting in a partial obstruction in the affected artery. Either condition can limit blood flow if it causes a cross-sectional narrowing of at least 50%. 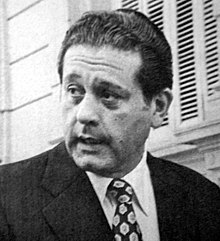 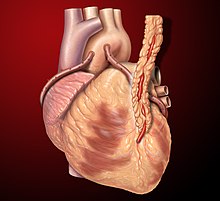 There are many variations in terminology, in which one or more of "artery", "bypass" or "graft" is left out. The most frequently used acronym for this type of surgery is CABG (pronounced 'cabbage'),[1] pluralized as CABGs (pronounced 'cabbages'). Initially the term aortocoronary bypass (ACB) was more popularly used to describe this procedure.[2] CAGS (coronary artery graft surgery, pronounced phonetically) should not be confused with coronary angiography (CAG). 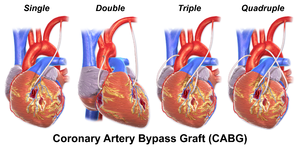 A coronary artery may be unsuitable for bypass grafting if it is small (< 1 mm or < 1.5 mm), heavily calcified, or located within the heart muscle rather than on the surface. A single obstruction of the left main coronary artery is associated with a higher risk for a cardiac death and usually receives a double bypass.[citation needed]

The surgeon reviews the coronary angiogram prior to surgery and identifies the number of obstructions, the percent obstruction of each, and the suitability of the arteries beyond the obstruction(s) as targets. The presumed number of bypass grafts needed as well as the location for graft attachment is determined in a preliminary fashion prior to surgery, but the final decision as to number and location is made during surgery by direct examination of the heart.

Age per se is not a factor in determining risk vs benefit of CABG.[5]

Prognosis following CABG depends on a variety of factors, and successful grafts typically last 8–15 years.[citation needed] In general, CABG improves the chances of survival of patients who are at high risk (generally triple or higher bypass), though statistically after about five years the difference in survival rate between those who have had surgery and those treated by drug therapy diminishes. Age at the time of CABG is critical to the prognosis, younger patients with no complicating diseases doing better, while older patients can usually be expected to suffer further blockage of the coronary arteries.[6]

Veins that are used either have their valves removed or are turned around so that the valves in them do not occlude blood flow in the graft. External support may be placed on the vein prior to grafting into the coronary circulation of the patient. LITA grafts are longer-lasting than vein grafts, both because the artery is more robust than a vein and because, being already connected to the arterial tree, the LITA need only be grafted at one end. The LITA is usually grafted to the left anterior descending coronary artery (LAD) because of its superior long-term patency when compared to saphenous vein grafts.[7][8]

A 2018 meta-analysis with over 4000 patient cases found hybrid coronary revascularization (LIMA-to-LAD anastomosis combined with percutaneous stents at other atherosclerotic sites) to have significant advantages compared with conventional CABG. Reduced incidence of blood transfusion, reduced hospital stay duration and reduced intubation duration were all reported. In contrast, HCR was found to be significantly more expensive compared to CABG.[15] 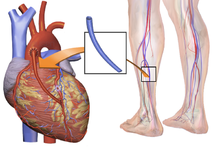 Coronary artery bypass surgery during mobilization (freeing) of the right coronary artery from its surrounding tissue, adipose tissue (yellow). The tube visible at the bottom is the aortic cannula (returns blood from the HLM). The tube above it (obscured by the surgeon on the right) is the venous cannula (receives blood from the body). The patient's heart is stopped and the aorta is cross-clamped. The patient's head (not seen) is at the bottom.

Hybrid Coronary Revascualrisation, where the LIMA-to-LAD anastomosis is combined with percutaneous stents in other atherosclerotic sites, has been shown to have significant advantages compared to conventional CABG, including a decrease in the incidence of blood transfusion, and a reduced intubation time. A 2018 meta-analysis has however demonstrated a greater financial cost when compared to conventional CABG.[31]

Choice of source of grafts

The choice of vessel(s) is highly dependent upon the particular surgeon and institution. Typically, the left internal thoracic artery (LITA) (previously referred to as left internal mammary artery or LIMA) is grafted to the left anterior descending artery and a combination of other arteries and veins is used for other coronary arteries.[32] The great saphenous vein from the leg is used approximately in 80% of all grafts for CABG.[33] The right internal thoracic (mammary) artery (RITA or RIMA) and the radial artery from the forearm are frequently used as well; in the U.S., these vessels are usually harvested either endoscopically, using a technique known as endoscopic vessel harvesting (EVH), or with the open-bridging technique, employing two or three small incisions. The right gastroepiploic artery from the stomach is infrequently used given the difficult mobilization from the abdomen.

Between 2000 and 2012, the number of CABG procedures carried out decreased across the majority of OECD countries. However, there remained substantial variation in the rate of procedures, with the U.S. carrying out four times as many CABG operations per 100,000 people as Spain.[38] These differences do not appear to be closely related to the incidence of heart disease, but may be due to variation in financial resources, capacity, treatment protocols and reporting methods.[39]