The Cornish Main Line (Cornish: Penn-hyns-horn Kernow) is a railway line in Cornwall in the United Kingdom. It runs from Penzance to Plymouth, crossing from Cornwall into Devon over the famous Royal Albert Bridge at Saltash.

It directly serves Truro, St Austell, Bodmin (by a Parkway station), and Liskeard. It forms the backbone for rail services in Cornwall and there are branches off it which serve St Ives, Falmouth, Newquay, and Looe. The main line also carries direct trains to and from London, Birmingham, the north of England and Scotland.

It is the southernmost railway line in the United Kingdom, and the westernmost in England. 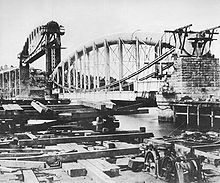 The Royal Albert Bridge under construction in 1858

The impecunious West Cornwall company sold its railway to the more powerful broad gauge Associated Companies, dominated by the Great Western Railway, and the new owners converted the West Cornwall line to broad gauge. Through goods trains started running in 1866 and passenger trains in 1867.

Both the West Cornwall and the Cornwall railways had been built cheaply and had numerous timber trestle viaducts; these were cheap to build but very expensive to maintain, as the timber decayed, and the iconic viaducts were eventually all reconstructed in masonry or masonry and wrought iron, or in a few cases by-passed. Those on the Cornwall Railway section are described at Cornwall Railway viaducts.

The most iconic structure on the route, however, is the Royal Albert Bridge spanning the River Tamar and opened in 1859; it remains in use to the present day.

During the later decades of the nineteenth century and the first half of the twentieth, the Great Western Railway was famous for providing transport to holiday destinations in Cornwall, and there were numerous branch lines served from the Cornish main line giving access to the resorts. The physical limitations of the steeply graded line imposed severe problems during the busiest times, not least for goods train operation. Equally famous was the line’s use for transporting vegetable produce from Cornwall, famously broccoli and cauliflower, and cut flowers from the Isles of Scilly.

To cope with the increasing traffic the line was gradually doubled between 1893 and 1930.[2]

Many of the branch lines were closed during the second half of the twentieth century, but in Cornwall the Looe, Newquay, Falmouth and St Ives branches remain in operation, with a basic local passenger traffic in winter considerably boosted by holidaymakers in summer. The historical development of the line is more fully dealt with at Hayle Railway, West Cornwall Railway, and Cornwall Railway. [3]

The Cornwall Main Line has been a very safe railway for passengers, with only a few accidents in the 19th century. These include: 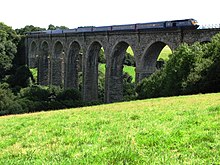 A train from London Paddington to Penzance crosses Moorswater Viaduct

The railway stations at St Austell and Penzance are adjacent to bus stations. In addition, integrated bus services operate from Bodmin Parkway to Bodmin, Wadebridge, and Padstow; from St Austell to The Eden Project; and from Redruth to Helston and RNAS Culdrose.

The route has a large number of viaducts, but the most significant structure is the Royal Albert Bridge[4] which crosses the River Tamar at Saltash. At Truro the viaducts give sweeping views of the city and River Fal, while further west the north coast can be seen near Hayle before the line swings onto the south coast for the last mile or so along the beach at Marazion, giving a good view of St Michael's Mount.

Nominal line speed is 65 mph (105 km/h) but there are local restrictions at many places. The route is mostly double-tracked and cleared for trains up to W7 and W6A gauges.[5] The 7.5-mile (12.1 km) section of single track from Burngullow to Probus (between the stations at St Austell and Truro) used to be a major cause of delays in the region, requiring trains to wait for preceding trains to clear the singled section before proceeding. The second track was restored in August 2004. The total cost of the project was £14.3 million and was funded by Objective One, Strategic Rail Authority and Cornwall County Council.

The number of passengers travelling on the Cornish Main Line has increased in the last few years. Between 2004/05 and 2011/12, with the exception of Keyham and Menheniot, all stations have reported an increase of at least 33% while Hayle, Par, Saltash and St Budeaux Ferry road all reported calculated to be in excess of 200%. The busiest stations are Plymouth, Penzance and Truro which all handle more than one million people arriving or departing each year. St Austell, Redruth and Liskeard all had more than 300,000 people in 2011-12, increases of around 50% or 60% over 2004/05.[6]