Corner Brook (2016 population: 19,806[1] CA 31,917) is a city located on the west coast of the island of Newfoundland in the province of Newfoundland and Labrador, Canada.

Located on the Bay of Islands at the mouth of the Humber River, the city is the second-largest population centre in the province behind St. John's,[2] and smallest of three cities behind St. John's and Mount Pearl.[3] As such, Corner Brook functions as a service centre for western and northern Newfoundland. It is located on the same latitude as Gaspé, Quebec, a city of similar size and landscape on the other side of the Gulf of St. Lawrence. Corner Brook is the most northern city in Atlantic Canada.

It is the administrative headquarters of the Qalipu Mi'kmaq First Nations band government.[4] The Mi'kmaq name for the nearby Humber River is "Maqtukwek".[5]

The area was surveyed by Captain James Cook in 1767. The Captain James Cook Historic Site stands on Crow Hill overlooking the city.[6] By the middle of the 19th century the population of Corner Brook was less than 100, and the inhabitants were engaged in fishing and lumber work.[7]

The area was originally four distinct communities, each with unique commercial activities: Curling, with its fishery; Corner Brook West (also known as Humber West or Westside) with its retail businesses; Corner Brook East (also known as Humbermouth and the Heights) with its railway and industrial operations; and Townsite (known as Corner Brook) to house employees of the pulp and paper mill, laid out in 1923 by Thomas Adams using Garden City principles.[8] In 1956, these four communities were amalgamated to form the present-day City of Corner Brook.

Between 1948 and 1958 about 70 people from Latvia and Germany settled in Corner Brook. They came as part of then Premier Joseph Smallwood's New Industries program. They built and worked at North Star Cement and the Atlantic Gypsum Plant. (For more history on the subject, see Latvians and Baltic Germans in Corner Brook)

Corner Brook is home to the Corner Brook Pulp & Paper Mill (owned by Kruger Inc.), which is a major employer for the region. The city has the largest regional hospital in western Newfoundland. It also has a wide array of shopping and retail businesses and federal and provincial government offices. It is home to Grenfell Campus, Memorial University, as well as campuses of Academy Canada and College of the North Atlantic. Corner Brook is also home to the province's newest high school, Corner Brook Regional High, which is an amalgamation of the former Regina and Herdman Collegiate high schools.

The Corner Brook Royals currently play in the West Coast Senior Hockey League and were the winners of the 1986 National Title, the Allan Cup. The Royals play their home games at the Corner Brook Civic Centre, formerly the Canada Games Centre. The arena was built in 1997 and was one of the main venues used when the city of Corner Brook hosted the 1999 Canada Games.[19]

Corner Brook was host of the Special Olympics Provincial Winter Games in February, 2011.[20] The city also twice hosted Raid the North Extreme, a televised 6-day multi-sport expedition race held in wilderness locations across Canada, and was a leg of the ITU World Cup Triathlon.[21]

The Arts and Science building of Grenfell Campus, Corner Brook

Corner Brook is home to Grenfell Campus, Memorial University where a strong arts community exists both within the school and well into the public. The campus houses the Grenfell Art Gallery. The Corner Brook Arts and Culture Centre among other institutions thrive in promoting the arts on all levels from visual arts to theatre and well beyond. In 2015, the City's newest theatre and gallery, the Rotary Arts Centre opened.[22]

Theatre Newfoundland Labrador is Corner Brook's professional theatre company: founded in 1979 by the late Maxim Mazumdar, it operates a year-round professional theatre company from its home base, Corner Brook. From September to May, their Sarah McDonald Youth Theatre offers classes in acting, stagecraft and music to youth aged 6 to 8 and produces a number of youth and community oriented productions in and around the city. From May to September it produces a professional repertory summer festival in Cow Head, Gros Morne National Park and regular national and international touring of plays like Tempting Providence by Robert Chafe, With Cruel Times in Between by Sarah McDonald, based on the various works by Al Pittman and Our Frances by Berni Stapleton.

For 32 years, the March Hare literary festival ran every March and celebrated poetry and written works by poets and writers from around Newfoundland and Labrador, Canada, and the world. Atlantic Canada's largest poetry festival was founded in the late 1980s by poet and playwright Al Pittman, and Corner Brook author, historian Rex Brown. The last March Hare was held in 2018. [23]

Corner Brook is also home to the region's only community radio station, Bay of Islands Radio (CKVB-FM 100.1, or BOIR). The station was previously only available online. However, the station received its broadcast license from the Canadian Radio-television and Telecommunications Commission on October 6, 2016, and commenced FM broadcasting on November 5, 2017. The radio station is located on Brook Street, in the city's downtown district.[24][25][26][27] 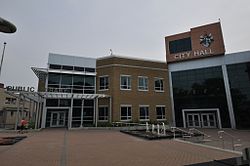 The Corner Brook City Council has six city councillors, in addition to a Mayor. The highest voting winning councillor becomes Deputy Mayor. The current mayor of the city is Jim Parsons. The deputy mayor is Bill Griffin. Municipal elections in Corner Brook are held every four years, on the last Tuesday in September. In the 2017 municipal elections held on September 26, 2017; business consultant Jim Parsons was elected Mayor defeating incumbent Charles Pender.[28] 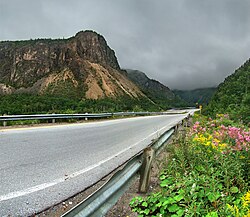 Along the Trans-Canada Highway

Route 1, the Trans-Canada Highway, passes the south side of the city on a high ridge before descending to the east, into the Humber Valley.

Corner Brook has a humid continental climate typical of most of Newfoundland. It is warmer in summer than St. John's due to less maritime exposure, whereas winters are colder than in the provincial capital. In terms of its overall climate, it is quite maritime, especially taking into account how the climate is in mainland Canada on similar latitudes. Precipitation is heavy year-round, but highest in December and January and lowest in April and May, with relatively more dry, stable conditions extending into July many years. The Corner Brook area lies in an especially heavy snow belt because of cold Arctic air masses from mainland Canada, coming from the west or northwest, crossing the waters of the Gulf of St. Lawrence and picking up moisture, resulting in "sea-effect" snow (similar to "lake effect" snow in US locations like Muskegon and Sault Ste. Marie, Michigan). The "sea effect" snow comes in addition to the heavy snow that can accompany mid-latitude storms, called "nor'easters," that approach the area from the U.S. Northeastern and New England states. Such storms can bring high winds and heavy precipitation, with possibly-changing precipitation types in a single storm. The combination of intense winter storms and "sea effect" snow make December and January the wettest months on average in Corner Brook. In December and January combined, average snowfall reaches nearly 200 centimetres (79 in).