Copenhagen Airport, Kastrup (Danish: Københavns Lufthavn, Kastrup, pronounced [kʰøpm̩ˈhɑwns ˈlɔftˌhɑwˀn ˈkʰæˌstʁɔp]; IATA: CPH, ICAO: EKCH) is the main international airport serving Copenhagen, Denmark, the rest of Zealand, the Øresund Region, and a large part of southern Sweden including Scania. It is the largest airport in the Nordic countries with close to 30.3 million passengers in 2019 and one of the oldest international airports in Europe. It is the third-busiest airport in Northern Europe, and the busiest for international travel in Scandinavia.[3]

The airport is the main hub out of three used by Scandinavian Airlines and is also an operating base for Sunclass Airlines and Norwegian Air Shuttle. Copenhagen Airport handles around 60 scheduled airlines, and has a maximum operation capability of 83 operations/hour, and a total of 108 jet bridges and remote parking stands. Unlike other Scandinavian airports, most of the airport's passengers are international. In 2015, 6.1% of passengers travelled to and from other Danish airports, 83.5% to/from other European airports, and 10.4% were intercontinental passengers.[5] The airport is owned by Københavns Lufthavne, which also operates Roskilde Airport. The airport employs 1,700 people (not including employees in shops, restaurants, etc.).[6]

The airport was inaugurated 20 April 1925 and was one of the first civil airports in the world. It consisted of a large, impressive terminal built of wood, a couple of hangars, a balloon mast, a hydroplane landing stage and a few grassy meadows that could be used as runways. The grass on the runways was kept short by sheep, which were shepherded away before take-offs and landings. From 1932 to 1939, takeoffs and landings increased from 6,000 to 50,000 and passenger number increased to 72,000. Between 1936 and 1939, a new terminal was built, considered one of the finest examples of Nordic functionalism. The terminal was designed by Vilhelm Lauritzen, who was considered a pioneer among architects, in terms not only of architecture and construction, but also of service and passenger comfort.[7]

In the years of World War II, the Copenhagen airport was closed for civil operations except for periodic flights to destinations in Sweden, Germany, and Austria. In the summer of 1941 the first hard-surface runway opened. It was 1,400 metres (4,600 ft) long and 65 metres (213 ft) wide. When World War II ended in May 1945, Copenhagen had the most modern international airport in Europe, because the airport remained untouched by actual acts of war.

On 1 August 1947, Scandinavian Airlines (SAS) was founded, an important event for the Copenhagen Airport, as Copenhagen was to be the main hub for the airline. Traffic increased rapidly in the first years SAS operated. On 26 January 1947, a KLM Douglas DC-3 "Dakota" crashed at the airport after stopping en route to Stockholm. 22 people on board died, including the Swedish prince Gustav Adolf and the American opera singer Grace Moore. In 1948 Copenhagen airport was third largest airport in Europe with 150 daily takeoffs and almost 300,000 passengers for the year. The airport continued its rapid growth. The terminal was expanded several times and new hangars were erected.

In 1954, Scandinavian Airlines begins the world's first trans-polar route, flying initially to Los Angeles. The route proved to be a publicity coup, and for some years Copenhagen became a popular transit point for Hollywood stars and producers flying to Europe – also the airport handled 11,000 tonnes of freight per year. In 1956, the airport handled 1 million passengers per year and won the award[clarification needed] for the world's best airport. The runways were lengthened and fitted with technically advanced equipment. 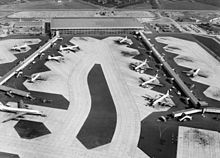 Kastrup Airport in the 1960s

By 10 May 1960, when the new airport terminal (now Terminal 2) was inaugurated, the daily number of jet operations had increased to 28, and still traffic kept on growing. The large new airport terminal soon became too small, and in 1969 yet another huge expansion programme was launched. Domestic traffic was relocated to a new domestic terminal (the eastern part of Terminal 1). The (current) international terminal was supplemented with a new pier (C) and a separate arrivals hall (the building between Terminals 2 and 3). A new control tower and 3,600 metres (11,800 ft) of additional runways allowed take-offs and landings to take place at the same time. When the comprehensive expansion was completed in 1972, the number of take-offs and landings exceeded 180,000 and there were more than eight million passengers.[8]

Throughout the 1970s, airport traffic continued to grow, but the airport was not expanded further. A new large airport located at the island of Saltholm (with a connecting bridge to Denmark and Sweden) was on the drawing board. It would be a huge investment, and the proposal was evaluated thoroughly by many experts. In 1980, however, the Danish parliament instead decided to expand the capacity of Copenhagen airport to 20–22 million passengers by the year 2000. This solution was far cheaper than building a new airport and because the new types of aircraft were less noisy, an airport on Saltholm did not offer a decisive environmental gain. In 1973 the airport handled 8 million passengers per year. The third (long) runway opened and the dual runway system (04L/22R-04R/22L) opened, strongly expanding the starts and landings capacity.

The expansion of the airport began in 1982, after the necessary period of planning. The intention was not to build Europe's largest airport, but to build transit passengers' favourite airport. A stay at the airport was supposed to be an integral part of the travel experience. Efficiency and precision were obvious demands, but focus was also on generating an oasis where international travellers could relax: beautiful architecture, Scandinavian design, and pleasant, light, and comfortable surroundings with plenty of shops, restaurants, and other facilities providing enjoyment and pleasure. The new cargo terminal was built in the eastern area of the airport.

A number of important construction projects were completed in 1998: a pier connecting the domestic and international terminals; a new arrivals hall; new modern baggage handling facilities; an underground railway station with two large underground parking facilities with 2400 spaces opens; and above it all the spacious and impressive delta-shaped terminal (Terminal 3) with 17 million passengers capacity. The first stage of the new Pier D was completed in the spring of 1999.[9]

On 1 July 2000 the Øresund Bridge opened which connects Denmark and Sweden by motorway and train. In 2001 the five-star Hilton hotel opened with 382 rooms. In 2006 for the first time in its history Copenhagen airport exceeded 20 million passengers and reached 20,900,000 passengers. In October 2007 the metro station opened, connecting the airport to the Copenhagen Metro. A new control tower opened in 2008 by Naviair as part of a major renovation of the ATC system. Airport officials announced plans to build a new low-cost terminal at the facility. On 31 October 2010 the new low cost terminal CPH Go opened by easyJet.[10] In 2013 the airport handled a new record of 24,067,030 passengers. In 2014 CPH announced plans to increase capacity to 40 million passengers per year.[11]

From late 2015, the airport became the first in Scandinavia to have a regularly scheduled A380 service after Emirates started operating the plane for its Copenhagen route.[12][13] 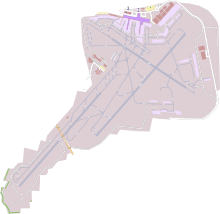 Map showing the terminals and runways

Copenhagen Airport has two terminals for check-in, Terminals 2 and 3, which handle all flights and share a common airside passenger concourse as well as the arrivals section which houses customs and baggage claim and is physically located in Terminal 3. The airside is reached through a common security check located between Terminal 2 and Terminal 3.

The common airside passenger concourse is divided into piers, called A, B, C, D and F.[14] Pier A and B are for flights inside Schengen only. Pier C is mostly for flights outside Schengen. Pier D is mostly for flights inside Schengen. The newest section, CPH Go, now called Pier F, dedicated to low-cost carriers opened in October 2010. So far, EasyJet, Transavia and Ryanair are the only airlines operating from this facility. An all new Terminal 4 has been discussed, but replaced by plans to expand the current facilities in appropriate increments.[15] Copenhagen Airport says passengers have easy transfer possibilities.[16]

A new pier, to be called Pier E, is under construction and will be fully finished in 2020.[22]

Despite the short distance to the city centre, approaches to, and departures from, the airport are above water due to the heading of the dual parallel runway system (04R/22L & 04L/22R). Those runways point to the Øresund strait, close in both directions. The supplementary runway (30/12) oriented perpendicular to the main runways also has its approach or departure over Øresund in one direction. In the opposite direction, the 30/12 runway has noise restrictions as flight happens close over residential areas.[23] Other advantages are the low altitude of the airport and absence of hills and high buildings below the approach directions. In case of fog, the runway 22L is equipped with an ILS of category III C system, which allows modern aircraft to land in zero sight. Runway 04R/22L was widened by 4 meters in each side at DKK 30M to accommodate the Airbus A380, as part of a general concrete renewal program of DKK 300M.[13][19][20]

The SAS traffic office resides at Copenhagen Airport South and in Dragør, Dragør Municipality together with a VIP-terminal. The VIP-terminal is actually the first terminal building, from the 1920s. It was moved about 2 km during the 1990s.

In 2015, Boeing opened a maintenance, repair, and operations facility at CPH, as proximity to daily operations is more important than high wages when checks have to be made every 1,000 flight hours.[62]

Within the airport area, special airport buses depart every 15 minutes. The bus line connects all terminals and parking lot areas and uses in all 11 bus stops. The transport is free of charge for all. During a few night hours, the buses depart every 20 minutes instead.[63] 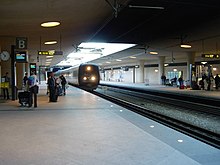 The airport's station is located underneath Terminal 3 on the Øresund Railway Line.

Line M2 of the Copenhagen Metro links the airport with the city centre in around 15 minutes. The Metro station is two floors above the underground rail station and continues on elevated tracks until it goes underground after 5 stations. The metro trains run very frequently, in rush hours every four minutes, outside rush hours and on weekends every six minutes, and every 15/20 minutes at night. 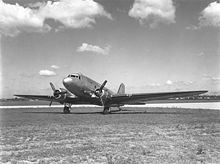 A Douglas Dakota, similar to the KLM aircraft that crashed in 1947

Copenhagen airport is used in several Danish and other Scandinavian films. The American-German 1971 Warren Beatty and Goldie Hawn film Dollars unfolds mainly at Hamburg, but a part of the film takes place also here. Dawn Divine (portrayed by Goldie Hawn) tails a man to Copenhagen in order to establish whether he is a crook, and all scenes in Copenhagen unfold at the airport.