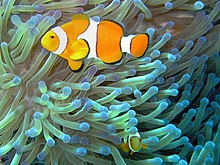 Many animal species cooperate with each other in mutual symbiosis. One example is the ocellaris clownfish, which dwells among the tentacles of Ritteri sea anemones. The anemones provide the clownfish with protection from their predators (which cannot tolerate the stings of the sea anemone's tentacles), while the fish defend the anemones against butterflyfish (which eat anemones)

Cooperation (written as co-operation in British English) is the process of groups of organisms working or acting together for common, mutual, or some underlying benefit, as opposed to working in competition for selfish benefit.[1] Many animal and plant species cooperate both with other members of their own species and with members of other species (symbiosis or mutualism).[2]

Humans cooperate for the same reasons as other animals: immediate benefit, genetic relatedness, and reciprocity, but also for particularly human reasons, such as honesty signaling (indirect reciprocity), cultural group selection, and for reasons having to do with cultural evolution.[1]

Language allows humans to cooperate on a very large scale. Certain studies have suggested that fairness affects human cooperation; individuals are willing to punish at their own cost (altruistic punishment) if they believe that they are being treated unfairly.[3][4] Sanfey, et al. conducted an experiment where 19 individuals were scanned using MRI while playing an ultimatum game in the role of the responder.[4] They received offers from other human partners and from a computer partner. Responders refused unfair offers from human partners at a significantly higher rate than those from a computer partner. The experiment also suggested that altruistic punishment is associated with negative emotions that are generated in unfair situations by the anterior insula of the brain.[4]

Cooperation is common in non-human animals. Besides cooperation with an immediate benefit for both actors, this behavior appears to occur mostly between relatives.[1] Spending time and resources assisting a related individual may at first seem destructive to the organism's chances of survival but is actually beneficial over the long-term. Since relatives share part of their genetic make-up, enhancing each other's chances of survival may actually increase the likelihood that the helper's genetic traits will be passed on to future generations.[6] The cooperative pulling paradigm is an experimental design used to assess if and under which conditions animals cooperate. It involves two or more animals pulling rewards towards themselves via an apparatus they can not successfully operate alone.[7]

Some researchers assert that cooperation is more complex than this. They maintain that helpers may receive more direct, and less indirect, gains from assisting others than is commonly reported. Furthermore, they insist that cooperation may not solely be an interaction between two individuals but may be part of the broader goal of unifying populations.[8]

One specific form of cooperation in animals is kin selection, which can be defined as animals helping to rear a relative's offspring in order to enhance their own fitness.[6][8]

Different theories explaining kin selection have been proposed, including the "pay-to-stay" and "territory inheritance" hypotheses. The "pay-to-stay" theory suggests that individuals help others rear offspring in order to return the favor of the breeders allowing them to live on their land. The "territory inheritance" theory contends that individuals help in order to have improved access to breeding areas once the breeders depart. These two hypotheses both appear to be valid, at least in cichlid fish.[9]

Studies conducted on red wolves support previous researchers'[8] contention that helpers obtain both immediate and long-term gains from cooperative breeding. Researchers evaluated the consequences of red wolves’ decisions to stay with their packs for extended periods of time after birth. It was found that this "delayed dispersal," while it involved helping other wolves rear their offspring, extended male wolves’ life spans. These findings suggest that kin selection may not only benefit an individual in the long-term in terms of increased fitness but in the short-term as well through enhanced chance of survival.[10]

Some research even suggests that certain species provide more help to the individuals with which they are more closely related. This phenomenon is known as kin discrimination.[11] In their meta-analysis, researchers compiled data on kin selection as mediated by genetic relatedness in 18 species, including the Western bluebird, Pied kingfisher, Australian magpie, and Dwarf Mongoose. They found that different species exhibited varying degrees of kin discrimination, with the largest frequencies occurring among those who have the most to gain from cooperative interactions.[11]

Cooperation is a process by which the components of a system work together to achieve the global properties.[1] In other words, individual components that appear to be "selfish" and independent work together to create a highly complex, greater-than-the-sum-of-its-parts system. The phenomenon is generally known as 'emergence' and is considered an outcome of self-organization.[12] Examples:

Understanding the mechanisms that create cooperating agents in a system is one of the most important and least well understood phenomena in nature, though there has not been a lack of effort.[citation needed]

Individual action on behalf of a larger system may be coerced (forced), voluntary (freely chosen), or even unintentional, and consequently individuals and groups might act in concert even though they have almost nothing in common as regards interests or goals. Examples of that can be found in market trade, military wars, families, workplaces, schools and prisons, and more generally any institution or organization of which individuals are part (out of own choice, by law, or forced).[citation needed]

For many years, the prisoner's dilemma game pointed out that even if all members of a group would benefit if all cooperate, individual self-interest may not favor cooperation. The prisoner's dilemma codifies this problem and has been the subject of much research, both theoretical and experimental. The first extensive experimental studies were conducted in the early 1960s by Anatol Rapoport and Albert Chammah.[13] Results from experimental economics show that humans often act more cooperatively than strict self-interest would seem to dictate. While economic experiments require subjects to make relatively abstract decisions for small stakes, evidence from natural experiments for high stakes support the claim that humans act more cooperatively than strict self-interest would dictate.[14]