The Conte II Cabinet is the 66th cabinet of the Italian Republic and the second cabinet led by Giuseppe Conte.[1][2][3] The government was sworn in on 5 September 2019.[4]

The cabinet is supported by the anti-establishment Five Star Movement (M5S) and the centre-left Democratic Party (PD), along with the leftist parliamentary group Free and Equal (LeU) and, since 17 September, the centrist party Italia Viva (IV), which splintered from the PD on that day. The government has been referred to as the "yellow-red government" (governo giallorosso), based on the customary colours of the main supporting parties.[5][6]

The Conte II Cabinet is the one with the lowest average age of its members in the history of the Italian Republic.[7]

At the time of the government formation, its ministers and other members were part of the following three parties.

The government also obtained the support of the Associative Movement Italians Abroad (MAIE), and one of its senators, Ricardo Merlo, was appointed as undersecretary in the cabinet.[8] The government received also the external support of the following minor parties: Popular Civic List (CP), the Italian Socialist Party (PSI), Italy in Common (IiC), the South Tyrolean People's Party (SVP) and the Trentino Tyrolean Autonomist Party (PATT).[9][10]

Currently, the government ministers and other members are from the following four parties.

On 17 September, former Prime Minister Matteo Renzi led a breakaway group outside the PD and formed Italia Viva, which confirmed its support to the government.[11] 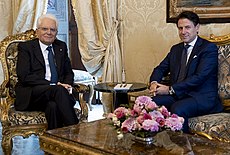 After the 2018 general election the Five Star Movement (M5S), which had come first in the election, and the League agreed to form a coalition government led by Giuseppe Conte, the Conte I Cabinet.

In August 2019, Matteo Salvini, Deputy Prime Minister and leader of the League, announced a motion of no confidence against the government, after growing tensions within the majority. Salvini's move came right after a vote in the Senate regarding the progress of the Turin–Lyon high-speed railway, in which the League, along with the largest opposition parties, voted against an attempt of the M5S to block the construction works.[12] Many political analysts believe the no confidence motion was an attempt to force early elections to improve his party's standing in Parliament, due to its increasing support in opinion polls, ensuring Salvini could become the next Prime Minister.[13] On 20 August, following the parliamentary debate in which Conte harshly accused Salvini of being a political opportunist who "had triggered the political crisis only to serve his personal interest",[14] the Prime Minister tendered his resignation to President Sergio Mattarella.[15]

On 21 August, Mattarella started consultations with parliamentary groups. On the same day, the national board of the Democratic Party (PD) officially and unanimously opened to the prospect of a cabinet with the M5S,[14] based on pro-Europeanism, green economy, sustainable development, fight against economic inequality and a new immigration policy.[16] However, the talks resulted in a unclear outcome, the President announced a second round of consultations starting on 27 August.[17]

Negotiations between PD and M5S started,[18] while Free and Equal (LeU), a left-wing parliamentary group, announced its support too.[19] On 28 August, PD's leader Nicola Zingaretti announced at the Quirinal Palace his favourable position on forming a new government with the Five Stars with Conte at its head.[20] On same day, Mattarella summoned Conte to the Quirinal Palace for 29 August to give him the task of forming a new cabinet.[21] On 3 September, M5S members voted through the so-called "Rousseau Platform" in favor of an agreement with the PD, with Conte Prime Minister, with more than 79% of the vote out of nearly 80,000 voters.[22]

The government at the Quirinal Palace for the oath

On 4 September Conte announced the ministers of this new cabinet, which was sworn in on the following day.[23] At its start, the government was composed of 21 ministers, 14 men and 7 women, a majority of whom are from Southern Italy.[24][25]

In September 2019 former Prime Minister Matteo Renzi lead a split from the PD, and formed a party called Italia Viva. The new party had two ministers (Teresa Bellanova and Elena Bonetti) and one undersecretary, and kept its support for the Conte II government.[30]

In January 2020, the Five Star Movement suffered multiple parliamentary defections and a sizeable decrease in popularity with respect to the 2018 elections.[33] Luigi Di Maio resigned from his position as M5S political leader, retaining his position as foreign minister.[34]

In February 2020, the COVID-19 pandemic was confirmed to have spread to northern Italian regions. In a few weeks, it spread to the rest of the country, with major concentration of cases in the regions of Lombardy, Emilia-Romagna, Piedmont and Veneto. The government faced the subsequent health crisis by imposing gradually stricter measures of social distancing and quarantine, until finally on 9 March established a nationwide lockdown, restricting the movement of people except for reasons of necessity, health, or work.[35][36]

Ministers and other members

Ministers and other members

A choropleth map showing the number of ministers from each region.

The Council of Ministers is composed of the following members:[37][1][2]

Composition of the Government