Consul (abbrev. cos.; Latin plural consules) was the title of one of the two chief magistrates of the Roman Republic, and subsequently also an important title under the Roman Empire. The title was used in other European city states through antiquity and the Middle Ages, then revived in modern states, notably in the First French Republic. The related adjective is consular, from the Latin consularis.

This usage contrasts with modern terminology, where a consul is a type of diplomat.

A consul held the highest elected political office of the Roman Republic (509 to 27 BC), and ancient Romans considered the consulship the highest level of the cursus honorum (an ascending sequence of public offices to which politicians aspired). Consuls were elected to office and held power for one year. There were always two consuls in power at any time.

Other uses in antiquity

It was not uncommon for an organization under Roman private law to copy the terminology of state and city institutions for its own statutory agents. The founding statute, or contract, of such an organisation was called lex, 'law'. The people elected each year were patricians, members of the upper class.

While many cities, including the Gallic states and the Carthaginian Republic, had a double-headed chief magistracy, another title was often used, such as the Punic sufet,[1] Duumvir, or native styles like Meddix.

Throughout most of southern France, a consul (French: consul or consule) was an office equivalent to the échevins [fr] of the north and roughly similar with English aldermen. The most prominent were those of Bordeaux and Toulouse, which came to be known as jurats and capitouls, respectively. The capitouls of Toulouse were granted transmittable nobility. In many other smaller towns the first consul was the equivalent of a mayor today, assisted by a variable number of secondary consuls and jurats. His main task was to levy and collect tax.

The city-state of Genoa, unlike ancient Rome, bestowed the title of consul on various state officials, not necessarily restricted to the highest. Among these were Genoese officials stationed in various Mediterranean ports, whose role included helping Genoese merchants and sailors in difficulties with the local authorities. This institution, with its name, was later emulated by other powers and is reflected in the modern usage of the word (see Consul (representative)). 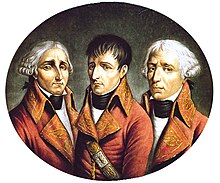 After Napoleon Bonaparte staged a coup against the Directory government in November 1799, the French Republic adopted a constitution which conferred executive powers upon three consuls, elected for a period of ten years. In reality, the first consul, Bonaparte, dominated his two colleagues and held supreme power, soon making himself consul for life (1802) and eventually, in 1804, emperor.

The office was held by:

The short-lived Bolognese Republic, proclaimed in 1796 as a French client republic in the Central Italian city of Bologna, had a government consisting of nine consuls and its head of state was the Presidente del Magistrato, i.e., chief magistrate, a presiding office held for four months by one of the consuls. Bologna already had consuls at some parts of its Medieval history.

Consular rule was interrupted by the Neapolitan occupation (27 November – 12 December 1798), which installed a Provisional Government:

Among the many petty local republics that were formed during the first year of the Greek Revolution, prior to the creation of a unified Provisional Government at the First National Assembly at Epidaurus, were:

Note: in Greek, the term for "consul" is "hypatos" (ὕπατος), which translates as "supreme one", and hence does not necessarily imply a joint office.

In between a series of juntas and various other short-lived regimes, the young republic was governed by "consuls of the republic", with two consuls alternating in power every 4 months:

After a few presidents of the Provisional Junta, there were again consuls of the republic, 14 March 1841 – 13 March 1844 (ruling jointly, but occasionally styled "first consul", "second consul"): Carlos Antonio López Ynsfrán (b. 1792 – d. 1862) + Mariano Roque Alonzo Romero (d. 1853) (the lasts of the aforementioned juntistas, Commandant-General of the Army) Thereafter all republican rulers were styled "president".

Modern uses of the term

In modern terminology, a consul is a type of diplomat. The American Heritage Dictionary defines consul as "an official appointed by a government to reside in a foreign country and represent its interests there." The Devil's Dictionary defines Consul as "in American politics, a person who having failed to secure an office from the people is given one by the Administration on condition that he leave the country".

In most governments, the consul is the head of the consular section of an embassy, and is responsible for all consular services such as immigrant and non-immigrant visas, passports, and citizen services for expatriates living or traveling in the host country.

A less common modern usage is when the consul of one country takes a governing role in the host country.