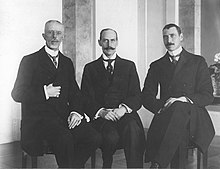 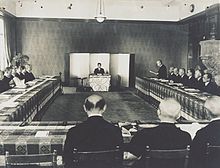 A meeting in the Japanese privy council in 1946 led by emperor Hirohito.

Constitutional monarchy may refer to a system in which the monarch acts as a non-party political head of state under the constitution, whether written or unwritten.[2] While most monarchs may hold formal authority and the government may legally operate in the monarch's name, in the form typical in Europe the monarch no longer personally sets public policy or chooses political leaders. Political scientist Vernon Bogdanor, paraphrasing Thomas Macaulay, has defined a constitutional monarch as "A sovereign who reigns but does not rule".[3]

The oldest constitutional monarchy dating back to ancient times was that of the Hittites. They were an ancient Anatolian people that lived during the Bronze Age whose king or queen had to share their authority with an assembly, called the Panku, which was the equivalent to a modern-day deliberative assembly or a legislature. Members of the Panku came from scattered noble families who worked as representatives of their subjects in an adjutant or subaltern federal-type landscape.[6][7]

England, Scotland and the United Kingdom

In the Kingdom of England, the Glorious Revolution of 1688 led to a constitutional monarchy restricted by laws such as the Bill of Rights 1689 and the Act of Settlement 1701, although limits on the power of the monarch ("a limited monarchy") are much older than that (see Magna Carta). At the same time, in Scotland, the Convention of Estates enacted the Claim of Right Act 1689, which placed similar limits on the Scottish monarchy.

Although Queen Anne was the last monarch to veto an Act of Parliament when, on 11 March 1708, she blocked the Scottish Militia Bill, Hanoverian monarchs continued to selectively dictate government policies. For instance King George III constantly blocked Catholic Emancipation, eventually precipitating the resignation of William Pitt the Younger as prime minister in 1801.[8] The sovereign's influence on the choice of prime minister gradually declined over this period, King William IV being the last monarch to dismiss a prime minister, when in 1834 he removed Lord Melbourne as a result of Melbourne's choice of Lord John Russell as Leader of the House of Commons.[9][10] Queen Victoria was the last monarch to exercise real personal power, but this diminished over the course of her reign. In 1839, she became the last sovereign to keep a prime minister in power against the will of Parliament when the Bedchamber crisis resulted in the retention of Lord Melbourne's administration.[11] By the end of her reign, however, she could do nothing to block the unacceptable (to her) premierships of William Gladstone, although she still exercised power in appointments to the Cabinet, for example in 1886 preventing Gladstone's choice of Hugh Childers as War Secretary in favor of Sir Henry Campbell-Bannerman.[12]

Today, the role of the British monarch is by convention effectively ceremonial.[13] Instead, the British Parliament and the Government – chiefly in the office of Prime Minister of the United Kingdom – exercise their powers under "Royal (or Crown) Prerogative": on behalf of the monarch and through powers still formally possessed by the Monarch.[14][15]

No person may accept significant public office without swearing an oath of allegiance to the Queen.[16] With few exceptions, the monarch is bound by constitutional convention to act on the advice of the Government.

Ceremonial and executive monarchy, should not be confused with democratic and non-democratic monarchical systems. For example, in Liechtenstein and Monaco, the ruling monarchs wield significant executive power. However, they are not absolute monarchs, and these countries are generally reckoned as democracies.

As originally conceived, a constitutional monarch was head of the executive branch and quite a powerful figure even though his or her power was limited by the constitution and the elected parliament. Some of the framers of the U.S. Constitution may have envisioned the president as an elected constitutional monarch, as the term was then understood, following Montesquieu's account of the separation of powers.[18]

The present-day concept of a constitutional monarchy developed in the United Kingdom, where the democratically elected parliaments, and their leader, the prime minister, exercise power, with the monarchs having ceded power and remaining as a titular position. In many cases the monarchs, while still at the very top of the political and social hierarchy, were given the status of "servants of the people" to reflect the new, egalitarian position. In the course of France's July Monarchy, Louis-Philippe I was styled "King of the French" rather than "King of France."

Nowadays a parliamentary democracy that is a constitutional monarchy is considered to differ from one that is a republic only in detail rather than in substance. In both cases, the titular head of state—monarch or president—serves the traditional role of embodying and representing the nation, while the government is carried on by a cabinet composed predominantly of elected Members of Parliament.

However, three important factors distinguish monarchies such as the United Kingdom from systems where greater power might otherwise rest with Parliament. These are: the Royal Prerogative under which the monarch may exercise power under certain very limited circumstances; Sovereign Immunity under which the monarch may do no wrong under the law because the responsible government is instead deemed accountable; and the monarch may not be subject to the same taxation or property use restrictions as most citizens. Other privileges may be nominal or ceremonial (e.g., where the executive, judiciary, police or armed forces act on the authority of or owe allegiance to the Crown).

Today slightly more than a quarter of constitutional monarchies are Western European countries, including the United Kingdom, Spain, the Netherlands, Belgium, Norway, Denmark, Luxembourg, Monaco, Liechtenstein and Sweden. However, the two most populous constitutional monarchies in the world are in Asia: Japan and Thailand. In these countries, the prime minister holds the day-to-day powers of governance, while the monarch retains residual (but not always insignificant) powers. The powers of the monarch differ between countries. In Denmark and in Belgium, for example, the Monarch formally appoints a representative to preside over the creation of a coalition government following a parliamentary election, while in Norway the King chairs special meetings of the cabinet.

There are sixteen constitutional monarchies under Queen Elizabeth II, which are known as Commonwealth realms.[19] Unlike some of their continental European counterparts, the Monarch and her Governors-General in the Commonwealth realms hold significant "reserve" or "prerogative" powers, to be wielded in times of extreme emergency or constitutional crises, usually to uphold parliamentary government. An instance of a Governor-General exercising such power occurred during the 1975 Australian constitutional crisis, when the Australian Prime Minister, Gough Whitlam, was dismissed by the Governor-General. The Australian Senate had threatened to block the Government's budget by refusing to pass the necessary appropriation bills. On November 11, 1975, Whitlam intended to call a half-Senate election in an attempt to break the deadlock. When he sought the Governor-General's approval of the election, the Governor-General instead dismissed him as Prime Minister, and shortly thereafter installed leader of the opposition Malcolm Fraser in his place. Acting quickly before all parliamentarians became aware of the change of government, Fraser and his allies secured passage of the appropriation bills, and the Governor-General dissolved Parliament for a double dissolution election. Fraser and his government were returned with a massive majority. This led to much speculation among Whitlam's supporters as to whether this use of the Governor-General's reserve powers was appropriate, and whether Australia should become a republic. Among supporters of constitutional monarchy, however, the experience confirmed the value of the monarchy as a source of checks and balances against elected politicians who might seek powers in excess of those conferred by the constitution, and ultimately as a safeguard against dictatorship.

In Thailand's constitutional monarchy, the monarch is recognized as the Head of State, Head of the Armed Forces, Upholder of the Buddhist Religion, and Defender of the Faith. The immediate former King, Bhumibol Adulyadej, was the longest-reigning monarch in the world and in all of Thailand's history, before passing away on 13 October 2016.[20] Bhumibol reigned through several political changes in the Thai government. He played an influential role in each incident, often acting as mediator between disputing political opponents. (See Bhumibol's role in Thai Politics.) Among the powers retained by the Thai monarch under the constitution, lèse majesté protects the image of the monarch and enables him to play a role in politics. It carries strict criminal penalties for violators. Generally, the Thai people were reverent of Bhumibol. Much of his social influence arose from this reverence and from the socioeconomic improvement efforts undertaken by the royal family.

In the United Kingdom, a frequent debate centers on when it is appropriate for a British monarch to act. When a monarch does act, political controversy can often ensue, partially because the neutrality of the crown is seen to be compromised in favor of a partisan goal, while some political scientists champion the idea of an "interventionist monarch" as a check against possible illegal action by politicians. For instance, the monarch of the United Kingdom can theoretically exercise an absolute veto over legislation by withholding royal assent. However, no monarch has done so since 1708, and it is widely believed that this and many of the monarch's other political powers are lapsed powers.

There are currently 43 monarchies worldwide.