In political science, a constitutional crisis is a problem or conflict in the function of a government that the political constitution or other fundamental governing law is perceived to be unable to resolve. There are several variations to this definition. For instance, one describes it as the crisis that arises out of the failure, or at least a strong risk of failure, of a constitution to perform its central functions.[1] The crisis may arise from a variety of possible causes. For example, a government may want to pass a law contrary to its constitution; the constitution may fail to provide a clear answer for a specific situation; the constitution may be clear but it may be politically infeasible to follow it; the government institutions themselves may falter or fail to live up to what the law prescribes them to be; or officials in the government may justify avoiding dealing with a serious problem based on narrow interpretations of the law.[2][3] Specific examples include the South African Coloured vote constitutional crisis in the 1950s, the secession of the southern U.S. states in 1860 and 1861, the controversial dismissal of the Australian Federal government in 1975 and the 2007 Ukrainian crisis.

Constitutional crises may arise from conflicts between different branches of government, conflicts between central and local governments, or simply conflicts among various factions within society. In the course of government, the crisis results when one or more of the parties to a political dispute willfully chooses to violate a law of the constitution; or to flout an unwritten constitutional convention; or to dispute the correct, legal interpretation of the violated constitutional law or of the flouted political custom. This was demonstrated by the so-called XYZ Affair, which involved the bribery of French officials by a contingent of American commissioners who were sent to preserve peace between France and the United States.[4] The incident was published in the American press and created a foreign policy crisis, which precipitated the passage of the Alien and Sedition Acts. Opposition to these acts in the form of the Virginia and Kentucky Resolutions cited that they violated freedom of speech and exhorted states to refuse their enforcement since they violated the Constitution.[4]

Moreover, if the crisis arises because the constitution is legally ambiguous, the ultimate resolution usually establishes the legal precedent to resolve future crises of constitutional administration. Such was the case in the United States presidential succession of John Tyler, which established that a successor to the presidency assumes the office without any limitation.

Politically, a constitutional crisis can lead to administrative paralysis and eventual collapse of the government, the loss of political legitimacy, or to civil war. A constitutional crisis is distinct from a rebellion, which occurs when political factions outside a government challenge the government's sovereignty, as in a coup d'état or a revolution led by the military or by civilians.

Democratic Republic of the Congo

Republic of The Gambia 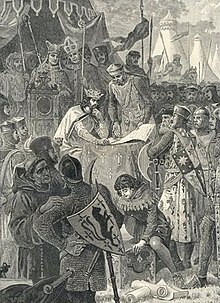 This covers the Kingdom of Scotland, which became part of the Kingdom of Great Britain after 1707. For constitutional crises since then, see United Kingdom below.

The Electoral Commission was a panel that resolved the disputed presidential election of 1876.