Conservation in Uganda is the protection and sustainable use of the country's rich natural resources. It became a significant movement during the British colonial period in the early 20th century and continues to play a major role in Uganda's political economy, as it underpins the tourist industry accounting for a fifth of the country's exports.[1]

Active concerted management of wildlife in the Uganda Protectorate began in 1923 with the formation of the Elephant Control Department. The object of this organization was to reduce the damage to peasant agriculture by limiting the size and range of elephant populations. Culling programs killed an average of 1000 elephants per year.[2] 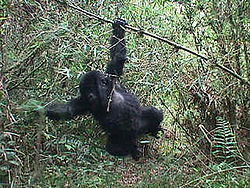 Uganda is home to a vast number of species, including a population of mountain gorillas in the Bwindi Impenetrable National Park, gorillas and golden monkeys in the Mgahinga Gorilla National Park, and hippos in the Murchison Falls National Park.[4]