The Conseil scolaire Viamonde (CSV) is a public-secular French first language school board, and manages elementary and secondary schools in the Ontario Peninsula and the Greater Golden Horseshoe. The school board operates 39 elementary schools and 14 secondary schools within that area. The school board operates two offices, one in Toronto, and one in Welland. The educational management office is located in the Maple Leaf neighbourhood of Toronto, whereas the business and financial management office is located in Welland.[1]

The school board was formed in 1998 after several local school boards were amalgamated into the French-language Public District School Board No. 58.[2] From 1999 to 2010, the school board was known as Conseil Scolaire de District du Centre-Sud-Ouest.[3] CSV is one of four members of the Association des conseillers(ères) des écoles publique de l'Ontario (ACÉPO). 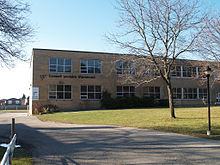 The board was created 1 January 1998 when the Government of Ontario decided to amalgamate several secular French school boards in the Ontario Peninsula (an area made of Southwestern Ontario, and the Greater Golden Horseshoe). School boards that were amalgamated included:

In 2011 the school district announced its intention to buy unused Toronto District School Board buildings; in order to do so, it has to use funds from the Ontario provincial government. After the government denied the funding, the Conseil scolaire Viamonde announced plans to sue the province.[4]

Main article: List of schools of the Conseil scolaire Viamonde

CSV presently operates 39 elementary schools and 14 secondary schools throughout Southwestern Ontario and most of the Greater Golden Horseshoe.[5] The area in which the school board operates and provides schooling for covers 68,180 km2 of Ontario.[1]