Advertisement - You can get this game from STEAM
For other uses, see Consecration (disambiguation) and Consecrate (album).

Consecration is the solemn dedication to a special purpose or service. The word consecration literally means "association with the sacred". Persons, places, or things can be consecrated, and the term is used in various ways by different groups. The origin of the word comes from the Latin stem consecrat, which means dedicated, devoted, and sacred.[1] A synonym for to consecrate is to sanctify, a distinct antonym is to desecrate.

Images of the Buddha and bodhisattvas are ceremonially consecrated in a broad range of Buddhist rituals that vary depending on the Buddhist traditions. Buddhābhiseka is a Pali and Sanskrit term referring to these consecration rituals.[2] 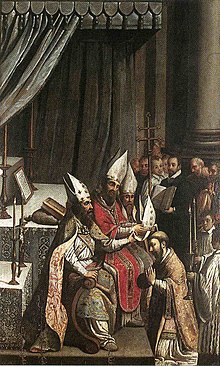 The Consecration of Deodat (1620, Claude Bassot).

"Consecration" is used in the Catholic Church as the setting apart for the service of God, of both persons and objects.

The ordination of a new bishop is also called a consecration. While the term "episcopal ordination" is now more common,[3] "consecration" was the preferred term from the Middle Ages through the period including the Second Vatican Council (11 October 1962 – 8 December 1965).[4]

Both the ceremonies and texts of the ordination rites are to be revised. The address given by the bishop at the beginning of each ordination or consecration may be in the mother tongue.

When a bishop is consecrated, the laying of hands may be done by all the bishops present.

Those who enter religious institutes, secular institutes or societies of apostolic life or become a hermit or a consecrated virgin are also described as members of the consecrated life.

Churches, altars, and other ritual objects

Chrism, an anointing oil, is (usually scented) olive oil consecrated by a bishop.

Objects such as patens and chalices, used for the sacrament of the Eucharist, are consecrated by a bishop, using chrism. The day before a new priest is ordained, there may be a vigil and a service or Mass at which the ordaining Bishop consecrates the paten(s) and chalice(s) of the ordinands (the men who are transitional deacons, about to be ordained priests).

A more solemn rite exists for what used to be called the "consecration of an altar", either of the altar alone or as the central part of the rite for a church. The rite is now called the dedication.[5][6] Since it would be contradictory to dedicate to the service of God a mortgage-burdened building, the rite of dedication of a church is carried out only if the building is debt-free. Otherwise, it is only blessed.

A very special act of consecration is that of the bread and wine used in the Eucharist, which according to Catholic belief involves their change into the Body and Blood of Christ, a change referred to as transubstantiation. To consecrate the bread and wine, the priest speaks the Words of Institution.

In the Eastern Orthodox Churches and the Eastern Catholic Churches, the term "consecration" can refer to either the Sacred Mystery (sacrament) of Cheirotonea (ordination through laying on of hands) of a bishop, or the sanctification and solemn dedication of a church building. It can also (more rarely) be used to describe the change of the bread and wine into the Body and Blood of Christ at the Divine Liturgy. The Chrism used at Chrismation and the Antimension placed on the Holy Table are also said to be consecrated.

A person may be consecrated for a specific role within a religious hierarchy, or a person may consecrate his or her life in an act of devotion. In particular, the ordination of a bishop is often called a consecration. In churches that follow the doctrine of apostolic succession (the historical episcopate), the bishops who consecrate a new bishop are known as the consecrators and form an unbroken line of succession back to the Apostles. Those who take the vows of religious life are said to be living a consecrated life.

Mormonism is replete with consecration doctrine, primarily Christ's title of "The Anointed One" signifying his official, authorized and unique role as the savior of mankind from sin and death, and secondarily each individual's opportunity and ultimate responsibility to accept Jesus' will for their life and consecrate themselves to living thereby wholeheartedly. Book of Mormon examples include "sanctification cometh because of their yielding their hearts unto God" (Heleman 3:35) and "come unto Christ, who is the Holy One of Israel, and partake of his salvation, and the power of his redemption, ... and offer your whole souls as an offering unto him, and continue in fasting and praying, and endure to the end; and as the Lord liveth ye will be saved" (Omni 1:26).

In most South Indian Hindu temples around the world, Kumbhabhishekam, or the temple's consecration ceremony, is done once every 12 years. It is usually done to purify the temple after a renovation or simply done to renew the purity of the temple. Hindus celebrate this event on the consecration date as the witnessing gives a good soul a thousand "punya", or good karma.[8]

Panch Kalyanaka Pratishtha is a traditional Jain ceremony that consecrates one or more Jain Tirthankara icons with celebration of Panch Kalyanaka (five auspicious events). The ceremony is generally held when a new Jain temple is erected or new idols are installed in temples.[9] The consecration must be supervised by a religious authority, an Acharya or a Bhattaraka or a scholar authorized by them.[citation needed]

Nonetheless, it is a feature of Muslim religious life in some cases. For example,