A confederation (also known as a confederacy or league) is a union of sovereign groups or states united for purposes of common action.[1] Usually created by a treaty, confederations of states tend to be established for dealing with critical issues, such as defense, foreign relations, internal trade or currency, with the general government being required to provide support for all its members. Confederalism represents a main form of intergovernmentalism, which is defined as any form of interaction between states which takes place on the basis of sovereign independence or government.

Since the member states of a confederation retain their sovereignty, they have an implicit right of secession. The political philosopher Emmerich de Vattel observed, "Several sovereign and independent states may unite themselves together by a perpetual confederacy without each in particular ceasing to be a perfect state.... The deliberations in common will offer no violence to the sovereignty of each member".[2]

Under a confederation, unlike a federal state, the central authority is relatively weak.[3] Decisions made by the general government in a unicameral legislature, a council of the member states, require subsequent implementation by the member states to take effect; they are not laws acting directly upon the individual but have more the character of interstate agreements.[4] Also, decision-making in the general government usually proceeds by consensus (unanimity), not by majority. Historically, those features limit the effectiveness of the union and so political pressure tends to build over time for the transition to a federal system of government, as happened in the American, Swiss and German cases of regional integration.

Many scholars have claimed that the Kingdom of Belgium, a country with a complicated federal structure has adopted some characteristics of a confederation under the pressure of separatist movements, especially in Flanders. For example, C. E. Lagasse declared that Belgium was "near the political system of a Confederation" regarding the constitutional reform agreements between Belgian Regions and between Communities,[5] and the director of the Centre de recherche et d'information socio-politiques (CRISP) Vincent de Coorebyter[6] called Belgium "undoubtedly a federation...[with] some aspects of a confederation" in Le Soir.[7] Also in Le Soir, Professor Michel Quévit of the Catholic University of Leuven wrote that the "Belgian political system is already in dynamics of a Confederation".[8][9]

Nevertheless, the Belgian regions and the linguistic communities do not have the necessary autonomy to leave the Belgian state. As such, federal aspects still dominate. Also, for fiscal policy and public finances, the federal state dominates the other levels of government.[citation needed]

The increasingly-confederal aspects of the Belgian Federal State appear to be a political reflection of the profound cultural, sociological and economic differences between the Flemish (Belgians who speak Dutch or Dutch dialects) and the Walloons (Belgians who speak French or French dialects).[10] For example, in the last several decades, over 95% of Belgians have voted for political parties that represent voters from only one community, the separatist N-VA being the party with the most voter support among the Flemish population. Parties that strongly advocate Belgian unity and appeal to voters of both communities play usually only a marginal role in nationwide general elections. The system in Belgium is known as consociationalism.[11][12]

That makes Belgium fundamentally different from federal countries like Switzerland, Canada, Germany and Australia. In those countries, national parties regularly receive over 90% of voter support. The only geographical areas comparable with Belgium within Europe are Catalonia, the Basque Country (both part of Spain), Northern Ireland and Scotland (both part of the United Kingdom) and parts of Italy, where a massive voter turnout for regional (and often separatist) political parties has become the rule in the last decades, and nationwide parties advocating national unity draw around half or sometimes less of the votes. 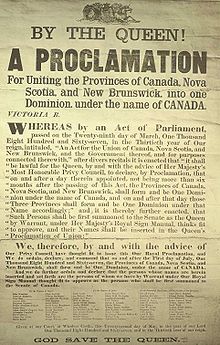 In Canada, the word confederation has an additional unrelated meaning.[13] "Confederation" refers to the process of (or the event of) establishing or joining the Canadian federal state.

In modern terminology, Canada is a federation, not a confederation.[14] However, to contemporaries of the Constitution Act, 1867, confederation did not have the same connotation of a weakly-centralized federation.[15] Canadian Confederation generally refers to the Constitution Act, 1867, which formed the Dominion of Canada from three of the colonies of British North America, and to the subsequent incorporation of other colonies and territories. Therefore, on 1 July 1867, Canada became a self-governing dominion of the British Empire with a federal structure under the leadership of Sir John A. Macdonald. The provinces involved were the Province of Canada (comprising Canada West, now Ontario, formerly Upper Canada; and Canada East, now Quebec, formerly Lower Canada), Nova Scotia, and New Brunswick. Later participants were Manitoba, British Columbia, Prince Edward Island, Alberta and Saskatchewan (the latter two created as provinces from the Northwest Territories in 1905), and finally Newfoundland (now Newfoundland and Labrador) in 1949. Canada is an unusually-decentralized federal state, not a confederate association of sovereign states,[13] the usual meaning of confederation in modern terms. A Canadian law, the Clarity Act, and a court ruling, Reference Re Secession of Quebec, set forth the conditions for negotiations to allow the Canadian provinces (though not territories) to leave the Canadian federal state but since that would require a constitutional amendment, there is no current "constitutional" method for withdrawal.

Its unique nature and the political sensitivities surrounding it cause there to be no common or legal classification for the European Union (EU). However, it bears some resemblance to both a confederation[16] (or a "new" type of confederation) and a federation.[17] The term supranational union has also been applied. The EU operates common economic policies with hundreds of common laws, which enable a single economic market, a common customs territory, (mainly) open internal borders, and a common currency among most member-states. However, unlike a federation, the EU does not have exclusive powers over foreign affairs, defence, and taxation. Furthermore, most EU laws, which have been developed by consensus between relevant national government ministers and then scrutinised and approved or rejected by the European Parliament, must be transposed into national law by national parliaments. Most collective decisions by member states are taken by weighted majorities and blocking minorities, rather than unanimity. Treaties or amendments to them require ratification by every member state before they can come into force.

However, some academic observers more usually discuss the EU in the terms of it being a federation.[18][19] As the international law professor Joseph H. H. Weiler (of the Hague Academy and New York University) wrote, "Europe has charted its own brand of constitutional federalism".[20] Jean-Michel Josselin and Alain Marciano see the European Court of Justice in Luxembourg City as being a primary force behind the building of a federal legal order for the EU,[21] with Josselin stating that a "complete shift from a confederation to a federation would have required to straight-forwardly replace the principality of the member states vis-à-vis the Union by that of the European citizens. As a consequence, both confederate and federate features coexist in the judicial landscape".[22] Rutgers political science professor R. Daniel Kelemen observed: "Those uncomfortable using the 'F' word in the EU context should feel free to refer to it as a quasi-federal or federal-like system. Nevertheless, the EU has the necessary attributes of a federal system. It is striking that while many scholars of the EU continue to resist analyzing it as a federation, most contemporary students of federalism view the EU as a federal system".[23] Thomas Risse and Tanja A. Börzel claim that the "EU only lacks two significant features of a federation. First, the Member States remain the 'masters' of the treaties, i.e., they have the exclusive power to amend or change the constitutive treaties of the EU. Second, the EU lacks a real 'tax and spend' capacity, in other words, there is no fiscal federalism".[24]

Valéry Giscard d'Estaing, the chairman of the body of experts commissioned to elaborate a constitutional charter for the European Union, was confronted with strong opposition from the United Kingdom towards including the words 'federal' or 'federation' in the unratified European Constitution and the word was replaced with either 'Community' or 'Union'.[25] 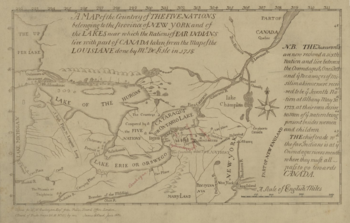 Map of the Five Nations (from the Darlington Collection)

In the context of the history of the indigenous peoples of the Americas, a confederacy may refer to a semi-permanent political and military alliance consisting of multiple nations (or "tribes", "bands", or "villages"), which maintained their separate leadership. One of the most well-known is the Haudenosaunee (or Iroquois), but there were many others during different eras and locations across North America, such as the Wabanaki Confederacy, Western Confederacy, Powhatan, Seven Nations of Canada, Pontiac's Confederacy, Illinois Confederation, Tecumseh's Confederacy, Great Sioux Nation, Blackfoot Confederacy, Iron Confederacy and Council of Three Fires.

The Haudenosaunee Confederacy, historically known as the Iroquois League or the League of Five (later Six) Nations, is the country of Native Americans (in what is now the United States) and First Nations (in what is now Canada) that consists of six nations: the Mohawk, the Oneida, the Onondaga, the Cayuga, the Seneca and the Tuscarora. The Six Nations have a representative government known as the Grand Council which is the oldest governmental institution still maintaining its original form in North America.[26] Each clan from the five nations sends chiefs to act as representatives and make decisions for the whole confederation. It has been operating since its foundation in 1142 despite limited international recognition today. In fact, Haudenosaunee issues passports for its citizens though travellers often face problems crossing state borders.

As a confederation[citation needed], Serbia and Montenegro were united only in very few realms, such as defense, foreign affairs and a very weak common president of the confederation. The two constituent republics functioned separately throughout the period of its short existence, and they continued to operate under separate economic policies and to use separate currencies (the euro was and still is the only legal tender in Montenegro, and the dinar was still the legal tender in Serbia). On 21 May 2006, the Montenegrin independence referendum was held. The final official results indicated on 31 May that 55.5% of voters voted in favor of independence. The confederation of Yugoslavia effectively came to an end after Montenegro's formal declaration of independence on 3 June 2006 and Serbia's formal declaration of independence on 5 June.

Switzerland, officially known as the Swiss Confederation,[27][28][29] is an example of a modern country that traditionally refers to itself as a confederation because the official (and traditional) name of Switzerland in German (the majority language of the Swiss) is Schweizerische Eidgenossenschaft (literally "Swiss Comradeship by Oath"), an expression which was translated into the Latin Confoederatio Helvetica (Helvetic Confederation). It had been a confederacy since its inception in 1291 as the Old Swiss Confederacy, which was originally created as an alliance among the valley communities of the central Alps and it retains the name of Confederacy for reasons of historical tradition. The confederacy facilitated management of common interests (such as freedom from external domination especially from the Habsburg Empire, the development of republican institutions in a Europe dominated by monarchies and free trade), and it ensured peace between the different cultural entities of the area.

After the Sonderbund War of 1847, when some of the Catholic cantons of Switzerland attempted to set up a separate union (Sonderbund in German) against the Protestant majority, the resulting political system established by the victorious cantons acquired all the characteristics of a federation.[30]

Historical confederations (especially those predating the 20th century) may not fit the current definition of a confederation, may be proclaimed as a federation but be confederal (or the reverse), and may not show any qualities that 21st-century political scientists might classify as those of a confederation.

Some have more the characteristics of a personal union, but appear here because of their self-styling as a "confederation":