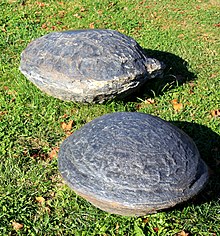 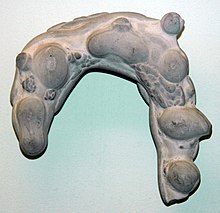 A concretion is a hard, compact mass of matter formed by the precipitation of mineral cement within the spaces between particles, and is found in sedimentary rock or soil.[1] Concretions are often ovoid or spherical in shape, although irregular shapes also occur. The word 'concretion' is derived from the Latin con meaning 'together' and crescere meaning 'to grow'. Concretions form within layers of sedimentary strata that have already been deposited. They usually form early in the burial history of the sediment, before the rest of the sediment is hardened into rock. This concretionary cement often makes the concretion harder and more resistant to weathering than the host stratum.

There is an important distinction to draw between concretions and nodules. Concretions are formed from mineral precipitation around some kind of nucleus while a nodule is a replacement body.

Descriptions dating from the 18th century attest to the fact that concretions have long been regarded as geological curiosities. Because of the variety of unusual shapes, sizes and compositions, concretions have been interpreted to be dinosaur eggs, animal and plant fossils (called pseudofossils), extraterrestrial debris or human artifacts.

Detailed studies have demonstrated that concretions form after sediments are buried but before the sediment is fully lithified during diagenesis.[2][3][4][5][6][7] They typically form when a mineral precipitates and cements sediment around a nucleus, which is often organic, such as a leaf, tooth, piece of shell or fossil. For this reason, fossil collectors commonly break open concretions in their search for fossil animal and plant specimens. Some of the most unusual concretion nuclei,[8] are World War II military shells, bombs, and shrapnel, which are found inside siderite concretions found in an English coastal salt marsh.

Depending on the environmental conditions present at the time of their formation, concretions can be created by either concentric or pervasive growth.[9][10] In concentric growth, the concretion grows as successive layers of mineral precipitate around a central core. This process results in roughly spherical concretions that grow with time. In the case of pervasive growth, cementation of the host sediments, by infilling of its pore space by precipitated minerals, occurs simultaneously throughout the volume of the area, which in time becomes a concretion. Concretions are often exposed at the surface by subsequent erosion that removes the weaker, uncemented material. 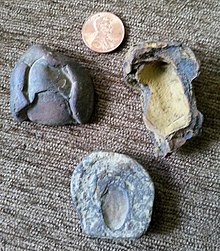 Concretions vary in shape, hardness and size, ranging from objects that require a magnifying lens to be clearly visible to huge bodies three meters in diameter and weighing several thousand pounds. The giant, red concretions occurring in Theodore Roosevelt National Park, in North Dakota, are almost 3 m (9.8 ft) in diameter. Spheroidal concretions, as large as 9 m (30 ft) in diameter, have been found eroding out of the Qasr El Sagha Formation within the Faiyum depression of Egypt. Concretions are usually similar in color to the rock in which they are found. Concretions occur in a wide variety of shapes, including spheres, disks, tubes, and grape-like or soap bubble-like aggregates.

They are commonly composed of a carbonate mineral such as calcite; an amorphous or microcrystalline form of silica such as chert, flint, or jasper; or an iron oxide or hydroxide such as goethite and hematite. They can also be composed of other minerals that include dolomite, ankerite, siderite, pyrite, marcasite, barite and gypsum.

Although concretions often consist of a single dominant mineral, other minerals can be present depending on the environmental conditions which created them. For example, carbonate concretions, which form in response to the reduction of sulfates by bacteria, often contain minor percentages of pyrite. Other concretions, which formed as a result of microbial sulfate reduction, consist of a mixture of calcite, barite, and pyrite.

Concretions are found in a variety of rocks, but are particularly common in shales, siltstones, and sandstones. They often outwardly resemble fossils or rocks that look as if they do not belong to the stratum in which they were found. Occasionally, concretions contain a fossil, either as its nucleus or as a component that was incorporated during its growth but concretions are not fossils themselves. They appear in nodular patches, concentrated along bedding planes, protruding from weathered cliffsides, randomly distributed over mudhills or perched on soft pedestals.

Small hematite concretions or Martian spherules have been observed by the Opportunity rover in the Eagle Crater on Mars.[11]

Concretions vary considerably in their compositions, shapes, sizes and modes of origin. 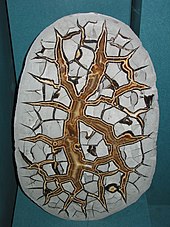 A slice of a septarian nodule

Septarian concretions or septarian nodules, are concretions containing angular cavities or cracks, called "septaria". The word comes from the Latin word septum; "partition", and refers to the cracks/separations in this kind of rock.[12] Cracks are highly variable in shape and volume, as well as the degree of shrinkage they indicate. Although it has commonly been assumed that concretions grew incrementally from the inside outwards, the fact that radially oriented cracks taper towards the margins of septarian concretions is taken as evidence that in these cases the periphery was stiffer while the inside was softer, presumably due to a gradient in the amount of cement precipitated.

The process that created the septaria that characterize septarian concretions remains unclear. A number of mechanisms have been proposed, including the dehydration of clay-rich, gel-rich, or organic-rich cores; shrinkage of the concretion's center; expansion of gases produced by the decay of organic matter; or brittle fracturing or shrinkage of the concretion interior by either earthquakes or compaction.[13][14] Septaria usually contain crystals, often calcite, that precipitated from circulating solutions. Siderite or pyrite coatings are also occasionally observed on the wall of the cavities present in the septaria, giving rise respectively to a panoply of bright reddish and golden colors. 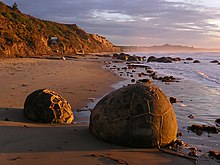 A model of Dinocochlea with Natural History Museum research scientist Paul Taylor as a scale.

Hiatus concretions at the base of the Menuha Formation (Upper Cretaceous), the Negev, southern Israel. 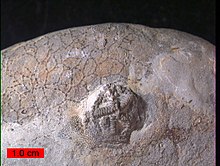 Hiatus concretions are distinguished by their stratigraphic history of exhumation, exposure and reburial. They are found where submarine erosion has concentrated early diagenetic concretions as lag surfaces by washing away surrounding fine-grained sediments.[25] Their significance for stratigraphy, sedimentology and paleontology was first noted by Voigt who referred to them as Hiatus-Konkretionen.[26] "Hiatus" refers to the break in sedimentation that allowed this erosion and exposure. They are found throughout the fossil record but are most common during periods in which calcite sea conditions prevailed, such as the Ordovician, Jurassic and Cretaceous.[25] Most are formed from the cemented infillings of burrow systems in siliciclastic or carbonate sediments.

A distinctive feature of hiatus concretions separating them from other types is that they were often encrusted by marine organisms including bryozoans, echinoderms and tube worms in the Paleozoic [27] and bryozoans, oysters and tube worms in the Mesozoic and Cenozoic. Hiatus concretions are also often significantly bored by worms and bivalves.[28]

Elongate concretions form parallel to sedimentary strata and have been studied extensively due to the inferred influence of phreatic (saturated) zone groundwater flow direction on the orientation of the axis of elongation.[29][20][30][31] In addition to providing information about the orientation of past fluid flow in the host rock, elongate concretions can provide insight into local permeability trends (i.e., permeability correlation structure; variation in groundwater velocity,[32] and the types of geological features that influence flow.

Elongate concretions are well known in the Kimmeridge Clay formation of northwest Europe. In outcrops, where they have acquired the name "doggers", they are typically only a few metres across, but in the subsurface they can be seen to penetrate up to tens of metres of along-hole dimension. Unlike limestone beds, however, it is impossible to consistently correlate them between even closely spaced wells.[citation needed] 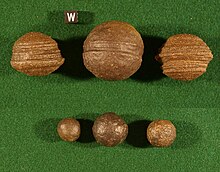 Moqui Marbles, hematite, goethite concretions, from the Navajo Sandstone of southeast Utah. The "W" cube at the top is one cubic centimeter in size.

Moqui Marbles, also called Moqui balls or "Moki marbles", are iron oxide concretions which can be found eroding in great abundance out of outcrops of the Navajo Sandstone within south-central and southeastern Utah. These concretions range in shape from spheres to discs, buttons, spiked balls, cylindrical forms, and other odd shapes. They range from pea-size to baseball-size. They were created by the precipitation of iron, which was dissolved in groundwater.[33][34][35] 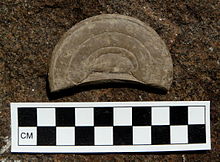 Disc concretions composed of calcium carbonate are often found eroding out of exposures of interlaminated silt and clay, varved, proglacial lake deposits. For example, great numbers of strikingly symmetrical concretions have been found eroding out of outcrops of Quaternary proglacial lake sediments along and in the gravels of the Connecticut River and its tributaries in Massachuset and Vermont. Depending the specific source of these concretions, they vary in an infinite variety of forms that include disc-shapes; crescent-shapes; watch-shapes; cylindrical or club-shapes; botryoidal masses; and animal-like forms. They can vary in length from 2 in (5.1 cm) to over 22 in (56 cm) and often exhibit concentric grooves on their surfaces. In the Connecticut River Valley, these concretions are often called "claystones" because the concretions are harder than the clay enclosing them. In local brickyards, they were called "clay-dogs" either because of their animal-like forms or the concretions were nuisances in molding bricks.[38][39][40] Similar disc-shaped calcium carbonate concretions have also been found in the Harricana River valley in the Abitibi-Témiscamingue administrative region of Quebec, and in Östergötland county, Sweden. In Scandinavia, they are known as "marlekor" ("fairy stones").[41][42]